Prognosis based on AJCC staging classification of colon and rectal cancer distributed by American Cancer Society (results from study of National Cancer Institute’s SEER database on 120,000 people diagnosed with colon cancer between 1991 and 2000)

The first objective in managing colorectal cancer patients is adequate and complete preoperative staging, which is routinely done by abdominal and thoracic CECT to evaluate overall liver status. The purpose of primary tumor treatment is to be as curative and radical as possible, while exactly defining local disease extension. This also needs to be obtained in cases of isolated metastatic spread. Surgery is usually the first choice of treatment for localized disease and single and/or resectable metastases. In local extended disease, the use of neoadjuvant chemoradiation therapy appears to improve prognosis [19, 20]. Adjuvant treatment is indicated to limit tumor recurrence, based on initial tumor extension and prognostic factors (stage III, lymph node metastases, poorly differentiated tumors, lymphovascular invasion), and it ordinarily consists of systemic chemotherapy protocols based on 5-fluorouracil as first choice. On completion of treatment, close follow-up is essential because of the high percentage of disease recurrence after primary treatment (30–40%) [21]. Follow-up entails systematic evaluation by morphological imaging techniques (CT, abdominal ultrasounds) and systematic evaluation of serum markers (CEA) to detect relapse or metastatic spread. Recurrence can be local, regional (lymph node localizations), peritoneal seeding or metastatic liver/lung lesions, and it is closely correlated with primary tumor characteristics. The recurrence rate in locally extended tumors is about 20% and rises to around 50% in the presence of initial lymph node involvement.

Of the nuclear imaging modalities for managing patients with colorectal cancer, [18F]FDG-PET is becoming the most widely used. It is considered the most useful technique for achieving clinical objectives and has been added to standard imaging techniques as a new “strategic” tool in this scenario. Currently, [18F]fluorodeoxyglucose ([18F]FDG) is the most useful and commonly used metabolic tracer in oncology.
Several studies have demonstrated that whole body [18F]FDG-PET is an accurate noninvasive technique in staging/­restaging several types of malignancies, and its usefulness has also been proved in the management of patients with ­colorectal cancer [22–24]. Guidelines on the appropriate use of [18F]FDG-PET in cancer recognize an appropriate use of this technique in restaging patients with suspected recurrence of colorectal cancer, elevated serum tumor markers such as CEA, and a negative or inconclusive standard diagnostic work-up, and in presurgical evaluation of patients with recurrence of disease and potentially resectable metastatic lesions [25]. In the preoperative initial staging of disease, [18F]FDG-PET is considered potentially useful but not yet sufficiently demonstrated [25].
Finally, [18F]FDG-PET in colorectal cancer holds promise for systematic follow-up and evaluation of response to therapy, especially in the evaluation of chemoradiation therapy efficacy in metastatic cancer (late and early response) or of local treatment efficacy such as radiofrequency ablation (RFA) of liver metastases. Furthermore, because positivity and intensity of [18F]FDG uptake are an expression of tumor aggressiveness, [18F]FDG-PET is also considered as a prognostic tool.
Classic, standard nuclear imaging techniques such as 99mTc-HDP/MDP bone scan in disease staging and restaging are limited to the evaluation of secondary bone localizations. Finally, nuclear techniques such as 90Y-microsphere treatment for unresectable liver metastases are becoming increasingly available. The current and potential uses of nuclear medicine techniques are discussed in the following sections.

Because few studies on a small number of patients are currently available, the role of [18F]FDG-PET in the presurgical staging of primary disease remains controversial. Primary cancer is detected and studied by morphological imaging, oral contrast CT, and endo-ultrasonography, which also allows for biopsy and histological confirmation. Several studies reported a high sensitivity of [18F]FDG-PET (95–100%) in detecting the primary tumor also when in situ [26–28]. The tumor’s histopathological features and lesion diameter are closely correlated with these data. False-negative results have been reported in cases of mucinous carcinoma and of small tumor foci in tubulovillous polyps or villous adenoma [26, 27, 29]. Abdel-Nabi et al. reported false-positive PET findings [positive predictive value (PPV) 90%] in patients without colorectal cancer but with IBD or previous diagnostic polipectomy [26]. Although [18F]FDG-PET appears to be more useful in detecting regional lymph node involvement and liver metastases, conflicting study results have been reported. Abdel-Nabi and Kantorova both found higher sensitivity (78–88%) with PET than with contrast-enhanced abdominal/pelvic CT (38–67%) or ultrasonography (25%), with high specificity (96–100%) in detecting liver metastases [26 27]. Furokawa reported that, when compared with ­multidetector helical CT for routine staging, [18F]FDG-PET did not seem superior in terms of sensitivity and accuracy [28]. In this study, [18F]FDG-PET accuracy in detecting lymph node involvement did not show a statistical difference in comparison with CECT accuracy (59% vs. 62%). Other studies confirmed low PET sensitivity (around 30%) primarily due to false-negative findings in cases of micrometastases or the presence of metastatic lymph nodes adjacent to the primary tumor [30]. In a review by Vriens et al. other more recent studies in small groups of patients showed that [18F]FDG-PET can change patient management in 12–27% of cases when added to CT and/or pelvic magnetic resonance imaging (MRI) and ultrasonography, leading in the bulk of cases to cancelation of surgery after unexpected metastatic lesions were detected, or to extension of the surgical plan or the radiotherapy field, or to institution of neoadjuvant treatment after the detection of pathological lymphadenopathy missed at morphological imaging [31–34]. In brief, the weighted mean change in the management of colorectal cancer calculated in the review was about 10.7% (95% confidence interval [CI] 7.6–14.5%) [35]. The discordant findings among the different studies can be explained by the patient selection bias, which showed a major impact of [18F]FDG-PET in patients with a high metastatic potential, while in localized disease [18F]FDG-PET gave less additional information to the standard diagnostic work-up (contrast-enhanced CT and colonoscopy). What can be said at present is that the use of PET in staging primary colorectal cancer can lead to a change in clinical management when compared to standard diagnostic work-up, but its systematic use in this application is not yet recognized. 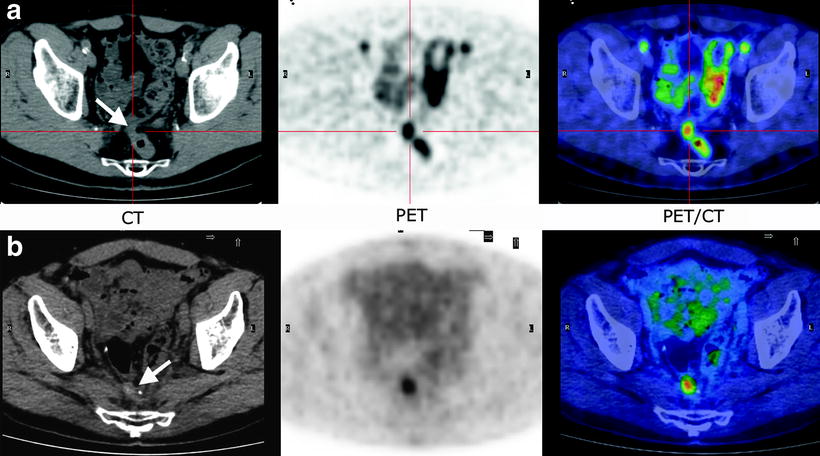 Metabolic characterization of undetermined presacral lesions by [18F]FDG-PET/CT. The nature of the lesions was confirmed by histological evaluation after the PET study. CT (a and b): suspected, undetermined presacral lesions at CT (arrows); PET scan shows (a and b) intense [18F]FDG uptakes at the lesions level indicating disease recurrence; FUSION: Overlap of CT and [18F]FDG-PET images allows to easily localize and to characterize [18F]FDG uptakes

Patient treated for primary colorectal cancer and referred for restaging. PET scan identified unexpected metastases in the liver not seen at CECT
Still unclear is the influence of [18F]FDG-PET on disease-free survival and overall survival in patients with recurrent colorectal cancer, owing to the difficulty with comparing studies of different patient subgroups with different treatment plans; nonetheless, whole body [18F]FDG-PET has a key role in clinical practice and provides additional value to standard diagnostic work-up and a high clinical impact. In this subset of patients, [18F]FDG-PET should be considered as an essential tool for better clinical management. Given its high NPV (around 95%), when a PET scan in this patient subgroup is negative, the presence of detectable disease recurrence could be excluded with [18F]FDG-PET, though close clinical follow-up should still be undertaken. While there is considerable scientific evidence for the usefulness of [18F]FDG-PET, certain limitations to the technique deserve mention.
[18F]FDG-PET can produce false-positive findings at ­evaluation of abdominal recurrence when postsurgical inflammation and inflammatory disease are present (i.e., abscesses, colitis, and rectal fistula). The physiological [18F]FDG uptake in the GI and genitourinary tracts due to the excretion of the tracer itself can mimic and also hide pathological sites.
The risk of false-negative findings is high in the presence of miliary liver metastatic spread, due to the physiological uptake of [18F]FDG in the liver parenchyma and to a low lesion to background ratio, or low [18F]FDG-uptake in diffuse peritoneal effusion.
Besides anatomical sites, lesion diameter is another important factor affecting PET accuracy and may be responsible for false-negative results, especially in lymph node or hepatic lesions <1 cm in diameter, this being near the technique’s lower limit of spatial resolution. Finally, high patient blood glucose levels (>150 mg/dL) can deteriorate imaging quality, and some metastatic lesions, especially those in the liver, can be missed [62]. This is why blood glucose levels should be accurately evaluated, and at least 6 h fasting before scanning is required. A meta-analysis by Huebner et al. evaluated the influence of false-positive and false-negative results on [18F]FDG-PET sensitivity and specificity in patients with recurrent disease [47]. The final data showed that false positives had a greater impact than false negatives. In fact, the sensitivity of whole body [18F]FDG-PET resulted high (97%), with similar rates for the detection of liver (91–96%) and pelvis (94%) involvement. Specificity values in the evaluation of recurrence differed for total body (76%), liver, and pelvis (97–99%) due to the greater likelihood of false-positive results in extrahepatic and extrapelvic regions than in isolated organs. Furthermore, a study by Akhrust et al. [63] on a group of patients who underwent [18F]FDG-PET for presurgical staging demonstrated that sensitivity was lower in those who received neoadjuvant chemotherapy pretreatment due to the risk of the stunning phenomenon that leads to false-negative results when [18F]FDG-PET is performed too early after the end of treatment.