Specific situations that are of specific concern and interest include prolonged deceleration (bradycardia), placental abruption, sinusoidal pattern, the infected fetus, the abnormal fetus and the dying fetus. In recent times, inadvertent recording of the maternal heart rate (MHR) mimicking the fetal heart rate (FHR) that has not been recognized by staff has led to adverse outcomes, and this is also discussed here.

Prolonged FHR deceleration (bradycardia) (FHR <80 beats per min (bpm)) for less than 3 min is considered suspicious, and for greater than 3 min is regarded as abnormal. A deceleration of greater than 3 min could be due to an acute event and may be a warning signal of acute hypoxia due to cord compression or prolapse, abruptio placentae, scar dehiscence, uterine hyperstimulation or another unknown cause. It can occur in healthy fetuses (possibly due to cord compression). Reversible causes for such an episode are epidural top up, vaginal examination and uterine hyperstimulation. Simple measures such as adjusting maternal position, stopping the oxytocin infusion, attending to hydration and giving oxygen by face mask may correct the condition. A patient who presents with continuous abdominal pain, vaginal bleeding, a tender, tense or irritable uterus and prolonged fetal bradycardia is likely to have suffered an abruption and warrants immediate delivery. Those in whom scar dehiscence or rupture is suspected, and those with cord prolapse, may present with prolonged bradycardia and need immediate delivery.

Most cases of prolonged bradycardia with no major pathology will show signs of recovery towards the baseline rate within 6 min.

If the clinical picture does not suggest abruption, scar dehiscence or cord prolapse, and if the fetus is appropriately grown at term with clear amniotic fluid and a reactive FHR pattern prior to the episode of bradycardia, return back to the baseline FHR pattern within 9 min is to be expected. The recovery towards the normal baseline within 6 min with good baseline variability at the time of the bradycardia and during recovery are reassuring signs, and one should wait with confidence that the FHR will revert to the normal baseline with a normal pattern. If there are no signs of recovery towards the baseline rate by 6 min, action should be taken to determine the cause, to determine cervical dilatation and to consider delivery. If the cervix is fully dilated and the head is low, a forceps or ventouse delivery should be carried out, but a caesarean section may be preferred if the cervix is not fully dilated or the head is high. This caesarean section comes under category 1 or grade 1 in terms of the classification for the urgency with which it should be done. Category 1 should have a specific code or term assigned, such as ‘grade 1’, ‘code red’ or ‘immediate’, ‘emergency’ or ‘crash’ caesarean section, in order to mobilize all the staff (obstetricians, anaesthetists, additional midwifery staff, theatre staff, operating department assistants and paediatricians) needed to accomplish delivering the baby within 30 min of the decision being made. Obviously the decision should be made as early as possible but without overreaction. The best policy may be for the midwife and the doctor in that room to push the bed to the theatre while the midwife on duty calls for the anaesthetist, paediatric and theatre staff. Early entry into the theatre offers the opportunity for more people to help with the various tasks of setting up an IV line, sending blood for Hb and ‘group and save’, catheterization, and explaining to the couple the need for caesarean section and reassuring them.

A 45-year-old multiparous woman was well known to the medical staff and midwives. A diagnosis of term labour was made at 22.00 h when the cervix was 5 cm dilated and the initial cardiotocograph (CTG) was normal (Fig. 11.1A). Shortly before midnight a prolonged bradycardia became manifest after an otherwise normal trace (Fig. 11.1B). The midwife correctly annotated ‘FH’ at the end of this strip of trace. Figure 11.1C shows the heart rate improving with good variability; however, the inexperienced obstetric registrar decided to perform a caesarean section and consequently the trace shows ‘discontinued for theatre’. Not surprisingly the Apgar scores were 9 at 1 min and 10 at 5 min. If the trace had not been disconnected it would have reverted to normal; a premature decision led to an unnecessary caesarean section in a multiparous woman in whom labour was probably progressing rapidly. A longer contraction duration or transient cord compression might account for the deceleration. The diagnosis was ‘obstetric registrar’ distress’! 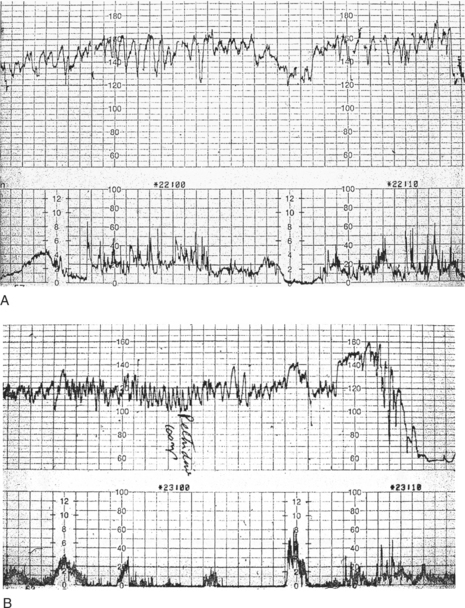 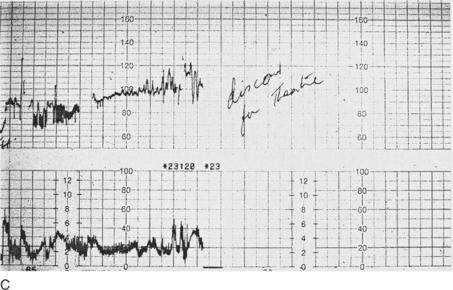 If the FHR does not show signs of recovery by 9 min the incidence of acidosis is increased, and one should take action to deliver the fetus as soon as possible.100 The clinical picture has to be considered while anxiously awaiting the FHR to return to normal. Fetuses who are post term, growth restricted, have no amniotic fluid or have thick meconium-stained fluid at rupture of membranes are at a greater risk of developing hypoxia. Those with an abnormal or suspicious FHR trace prior to the episode of bradycardia are also at a greater risk of hypoxia developing within a short time. In these situations it may be better to take action early if the FHR fails to return to normal. If uterine hyperstimulation due to oxytocics is the cause, oxytocin infusion should be stopped. Inhibition of uterine contractions with a bolus intravenous dose of a betamimetic drug may be of value in some situations. Fetal scalp blood sampling (FBS) at the time of persistent prolonged deceleration, or soon after, may delay urgently needed action and is contraindicated.13 Figure 11.2 shows the trace in a case without obvious risk factors. Fetal scalp blood sampling, which can prolong the deceleration due to pressure on the fetal head, delayed delivery. Caesarean section was eventually performed. The baby had very poor Apgar scores and died on the third day after a period of neonatal convulsions. 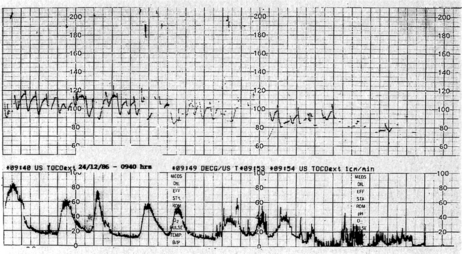 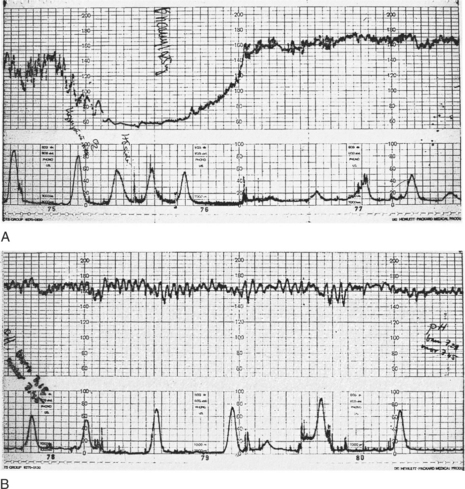 Figure 11.3 (A) Acidosis at time of bradycardia; (B) pH recovers after trace returns to normal

Scalp pH measurement should not be performed for prolonged deceleration.

Scar rupture or dehiscence may not show the classical symptoms and signs of scar pain, tenderness, vaginal bleeding or alteration in maternal pulse or blood pressure. Changes in FHR or uterine activity may be an earlier manifestation of loss of integrity of the scar, and prompt action should avoid fetal or maternal morbidity or mortality. In these cases a prolonged deceleration may be an ominous sign and may indicate scar rupture. Figure 11.4A shows a prolonged deceleration in a case of labour with a previous caesarean section. Delivery was delayed (Fig. 11.4B), resulting in a baby with poor Apgar scores and neonatal asphyxial death on the second day. Whenever an operative delivery is planned the fetal heart should be checked prior to delivery as the baby may be already dead if there has been delay. In one such case prolonged deceleration followed an eclamptic fit (Fig. 11.5). The convulsions were controlled and the baby was delivered in 30 min; a reasonable delay to stabilize the maternal condition. The fetal heart was not verified just before delivery and the baby was a fresh stillbirth.104 In cases of placental abruption it may not be possible to listen to the fetal heart with a stethoscope or an electronic monitor. An ultrasound scan is therefore useful. 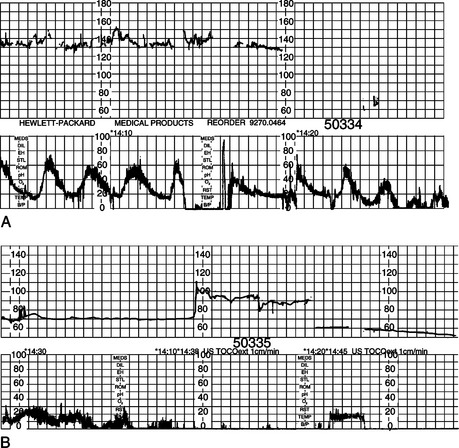 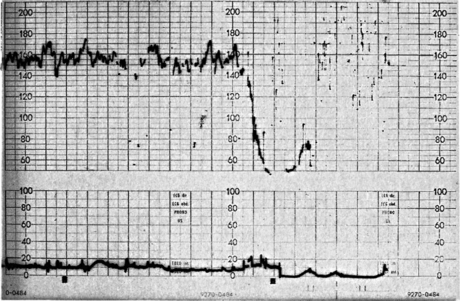 The procedure in the case of prolonged deceleration is shown in Table 11.1. Each hospital should have facilities to perform an immediate caesarean section and deliver the baby within 15–20 min of taking the decision, especially if high-risk labours (such as cases of previous caesarean section) are being looked after. This is referred to as delivery from a ‘hot start’. Delivery by caesarean section from a ‘cold start’ may be permitted with a decision-to-delivery interval of 30 min. Audit and review of this in any unit is important.