Compensating filters in this atlas 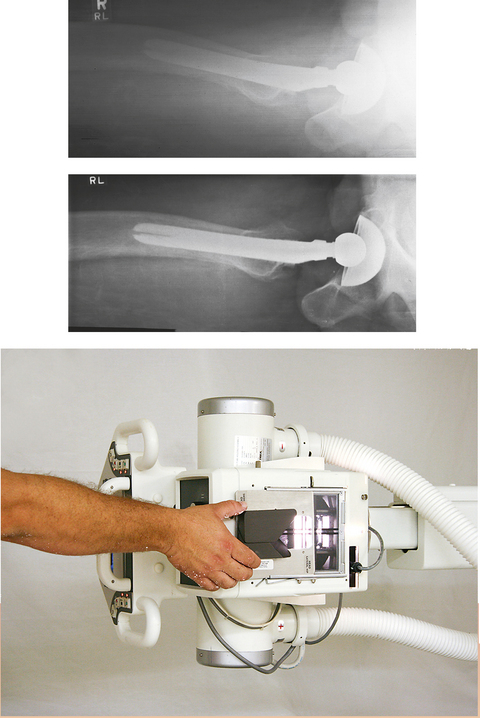 In most cases, radiography is accomplished using a single exposure technique for a given body structure. Some structures contain areas of significantly varied tissue thickness and density that must be shown on one image, however. These structures present special challenges in showing the anatomic structures with an acceptable range of densities. Often, two exposures must be made on these body structures, doubling the radiation exposure to the patient.

Typically, if one exposure is used, a technique is selected to penetrate adequately the densest area of anatomy. In this case, the radiologist highlights the dark anatomic area on the image with a “hot-light.” These images often have to be viewed by other physicians without having such a light available. With digital radiography systems, the image can be adjusted with the computer to lighten the dark area of anatomy; however, the large difference in transmitted x-rays often exceeds the dynamic range of the software. Images that appear low in contrast, contain high noise, or show processing artifacts can result. Clinical experience shows that compensating filters improve digital images.

Examples of x-ray projections that have to show significantly varied tissue density include the anteroposterior (AP) projection of the thoracic spine, the axiolateral projection (Danelius-Miller method) of the hip, and the lateral cervicothoracic region (swimmer’s technique) (Fig. 2-1). Exposure of these structures with a uniformly intense x-ray beam results in the production of an image with areas of underexposed or overexposed anatomy. To compensate for these variations in tissue density, specially designed attenuating devices called compensating filters can be placed between the radiographic tube and the image receptor (IR). The resulting attenuated beam more appropriately exposes the various tissue densities of the anatomy and reveals more anatomic detail. Equally important, the filter reduces the entrance skin exposure and the dose to some of the organs in the body (Fig. 2-2).

Fig. 2-1 A-C, Body structures with significantly varied tissue thickness and density include thoracic spine (AP) (A), hip (lateral) (B), and cervicothoracic region (lateral) (C). Note different thicknesses in these areas. Use of compensating filters allows these structures to be shown with one exposure.

The technique of compensatory filtration was first applied in 1905 by Pfahler, 1 not long after x-rays were first discovered. Pfahler used wet shoe leather as the filter by wrapping it around a patient’s arm. Compensating filters of one type or another have been in use since that time. Some of the most common filters in use today are shown in Fig. 2-3. These filters can be used with screen-film and digital imaging systems to improve the image quality of various anatomic areas. With most digital systems, filters are necessary to obtain a diagnostic image of a body part with extreme differences in density. In addition, radiation exposure to the patient is reduced through elimination of extra exposures needed to show all of the anatomy and through the beam-hardening effect of the attenuating filter. The increasing thickness of the filter over the thinner body part also acts to reduce exposure. 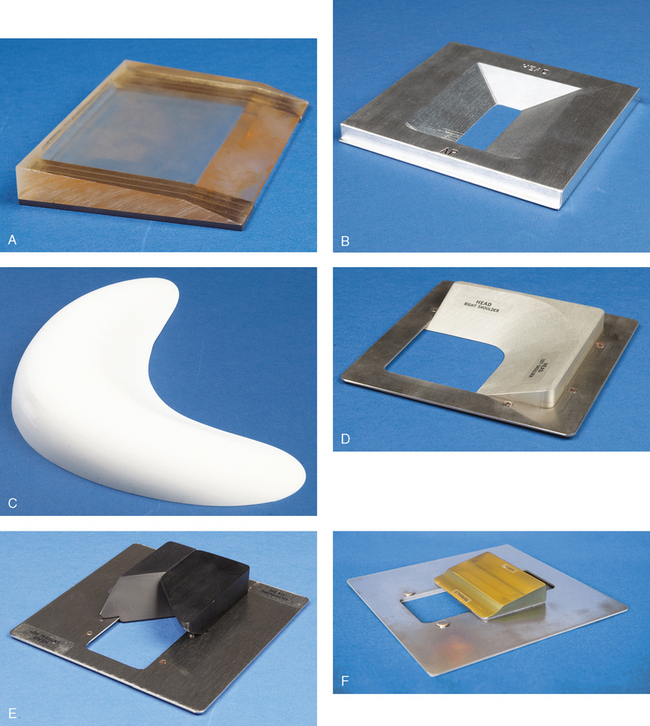 The appropriate use of radiographic compensating filters is an important addition to the radiographer’s skill set. The radiographer determines whether or not to use a filter based on an assessment of the patient and determines the type and exact position of the filter. This determination is made while positioning the patient. Radiographic projections of the lateral hip and the lateral C7-T1 cervicothoracic region in most instances require a filter to show all the anatomy on one image. Projections such as the AP shoulder and AP thoracic spine may not need a filter on hyposthenic patients; however, on hypersthenic patients and patients who are “barrel-chested” or obese, a filter is necessary. Pediatric patients seldom require a filter except when posteroanterior (PA) and lateral projections of the full spine are done in cases of spinal curvatures such as scoliosis. Compensating filters for full-spine radiography not only allow the entire spine to be imaged with one exposure, but they also significantly reduce the radiation exposure to the young patients who require these images.1–3

Compensating filters are manufactured in various shapes and are composed of several materials. The shape or material chosen is based on the particular body part to be imaged. The exact placement of the filter also varies, with most being placed between the x-ray tube and the skin surface, although some are placed under the patient. Filters placed under the patient often produce distinct outlines of the filter, which can be objectionable to the radiologist.