Many clavicular fractures are noted incidentally on chest radiographs obtained after the infant has left the hospital or when callus formation is palpated by the parent or the physician at the first well-baby examination. It is, thus, likely that the incidence of clavicular fractures is higher than that stated in the literature.

Fractures usually involve the mid portion or the junction of the mid and distal third of the bone. In a recent study of 131 presumed birth-related clavicle fractures, none were found to involve the medial or distal ends of the bone (24). SPNBF was rarely seen in fractures less than 7 days old, and most often present by 10 days (Fig. 11.2). The callus typically evolves from a fluffy, indistinct character (soft callus), to a well-defined trabecular matrix (hard callus) (see Chapter 6). Therefore, if a clavicular fracture shows no callus on good-quality radiographs by 11 days of age in an otherwise normal infant, a birth injury is highly unlikely. Furthermore, if the fracture involves the proximal or distal ends of the bone, and is associated with upper rib or acromial fractures, birth injury is also very unlikely. A rare instance of bilateral birth-related clavicular fractures in a newborn with congenital heart disease is shown in Fig. 11.3.

Figure 11.2 Obstetric clavicular fracture. AP view of the left clavicle in a two-week-old infant with a palpable clavicular mass shows a healing (intermediate/hard callus) fracture at the junction of the middle and distal third of the bone (arrows). A large amount of callus is present.

SPNBF of the long bones without fracture was described in depth by Snedecor and colleagues in 1935 (2). They reported four infants delivered by breech extraction. All patients had clinical findings including soft tissue swelling, pain, limitation of motion, and discoloration. The SPNBF was seen at nine days of age in one infant. In older infants, the SPNBF was dramatic and extended to the ends of the long bone. Some of these cases probably represented unrecognized physeal injuries (see below), as well as isolated subperiosteal hemorrhage (SH). In the modern obstetric era, the occurrence of isolated SPNBF related to delivery is distinctly unusual.

Fractures are the other important long bone injury that occurs during delivery. Historically, most long bone fractures have been sustained with breech and high forceps extractions, and thus cesarean section has resulted in a marked reduction in these obstetric injuries (27, 28). However, long bone fractures continue to be reported with difficult vaginal deliveries, including breech or armling extractions, and even cesarean section (29–38). Most series describe fractures of the femoral and humeral shafts, but CMLs and physeal injuries have also been noted (19, 38). Thompson and others described a newborn with a spiral fracture of the radius, as well as a fracture of the humerus in an armling extraction for shoulder dystocia (21). Very rarely, dislocations result from difficult deliveries (39). 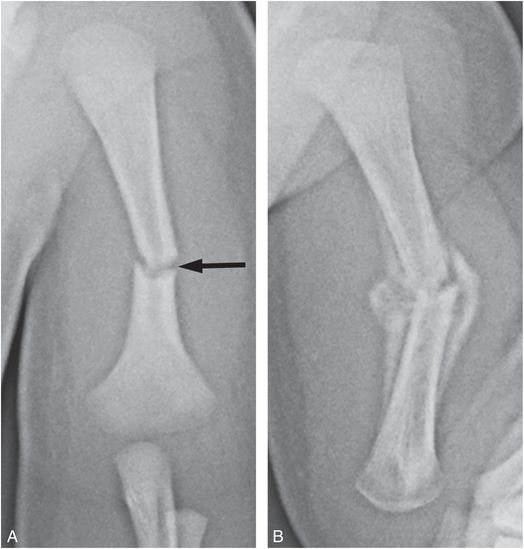 Figure 11.4 Humeral shaft fracture. A six-day-old full-term infant with decreased use of the left arm. The father and obstetrician reportedly heard a “pop” as the shoulder was delivered with some difficulty. No abnormality was detected in the initial physical examination. A, AP view of the left humerus demonstrates a transverse fracture of the midhumeral shaft (arrow). B, Radiograph at 20 days of age shows generous hard callus spanning the fracture site with increased angular deformity.

An audible crack may be evident at the time of fracture and physical findings are usually present shortly after birth; however, diagnosis may be delayed until diminished movement or swelling of the upper extremity is recognized (Fig. 11.4). With immobilization, SPNBF is usually present by 10 days of age, and the development of hard callus may be noted as early as 2 weeks. Surrounding robust callus/ossifying hematoma may produce a dramatic appearance (Fig. 11.5). Humeral fractures may occasionally be accompanied by ipsilateral and rarely contralateral clavicular fractures (see Fig. 11.1).

Figure 11.5 Obstetric humeral fracture. AP view of the humerus in a two-week-old infant demonstrates an angulated oblique fracture of the midshaft of the humerus. Callus extends well into the soft tissues (small arrows), indicating extensive hemorrhage. SPNBF is noted along the shaft (large arrow).

Obstetric fractures of the epiphyseal–metaphyseal complex of the humerus are important injuries, not only because they continue to be recognized in the current obstetric era, but also because their appearances are indistinguishable from those due to child abuse. As with abusive injuries, a continuum appears to exist between fractures restricted principally to the spongiosa of the metaphyses (CMLs) and those extending to involve substantial portions of the physis (Salter–Harris [SH] injuries). In 1949, Snedecor and Wilson expanded on their earlier observations, describing 11 cases of long bone injuries after breech extraction (3). A wide spectrum of fractures was presented ranging from relatively localized metaphyseal injuries similar to the corner fracture and bucket handle patterns subsequently described by Caffey, to physeal injuries of the SH type II variety (41, 42). One of their cases involved the proximal humerus; the remainder involved the lower extremities. Subsequent articles have further elucidated the imaging features and have added the distal humerus to the regions occasionally affected (32, 33, 35, 43–46).

As with injuries in young abused infants (see Chapter 4), birth-related proximal humeral epiphyseal separations will be either a SH type I or II injury (35, 38). Although usually secondary to difficult vaginal deliveries, these injuries do occur with cesarean section (Fig. 11.6). 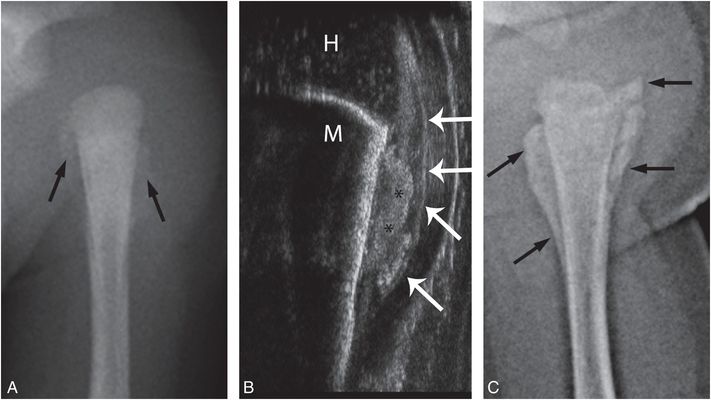 Figure 11.6 SH type I proximal humeral fracture. A full-term 7-lb, 8-oz. infant with decreased arm movement following elective cesarean section. Initial radiograph of the arm was reportedly normal. A, AP radiograph of the left humerus at 10 days of age shows SPNBF around the proximal humeral metaphysis (arrows) without fracture fragment. The humeral epiphysis is not ossified. B, Coronal sonogram shows elevation of the periosteum/perichondrium (arrows) with a subperiosteal hyperechoic focus along the metadiaphysis (*) consistent with hematoma. Note the normal relationship of the humeral head (H) and metaphysis (M). C, External rotation view of the left shoulder at age three weeks shows mature thick metaphyseal SPNBF (arrows) extending to the physis.

Although a shoulder injury will eventually be suspected due to limited movement of the extremity, recognition may be delayed. If there is no ossification in the humeral head and there is no gross displacement, radiographic diagnosis of a SH type I injury is not possible. Follow-up radiographs should permit diagnosis. Sonography elucidates the displacements and the accompanying SPNBF (Figs. 11.6B, 11.7). 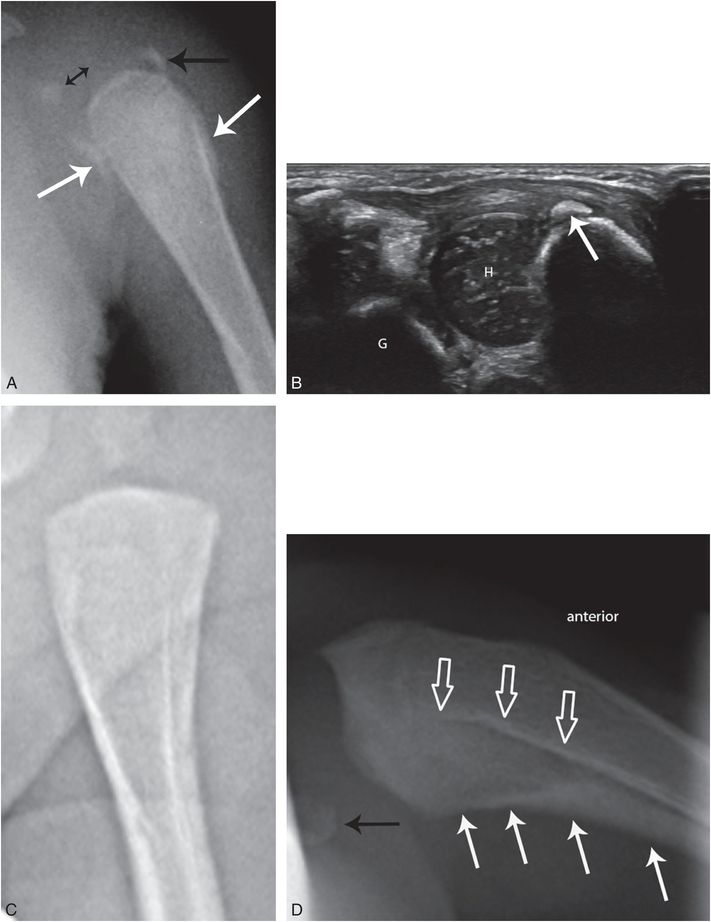 Gross displacement of the humeral metaphysis with respect to the epiphysis may be underestimated on the frontal radiography, but sonography can show impressive epiphyseal separation and angulation with respect to the metaphysis (Fig. 11.7B) (35, 48). Although technically challenging, an axillary projection can nicely display the dramatic deformity (Fig. 11.7D).

Distal humeral physeal injuries related to delivery are well described and sonography has facilitated early diagnosis and characterization (32, 43, 45–47, 49). The usual injuries are SH type I physeal fractures, and thus it is only the abnormal relationship between the distal humeral metaphysis and the forearm that points to the radiographic diagnosis (Fig. 11.8). Since the principal epiphyseal displacement is usually posterior, and lateral views may be suboptimal, an oblique frontal projection with external rotation of the shoulder will show apparent medial displacement of the radius and ulna (Fig. 11.8A). Sonography elegantly characterizes the angular and positional deformity at the distal humeral physis with preservation of radiocapitellar and ulnar-trochlear relationships (Figs. 11.8B,C). As noted, the major forces occurring with humeral epiphyseal separations may also result in clavicle fractures (Fig. 11.9).

Figure 11.8 Distal humeral epiphyseal separation. A 5-day-old infant with left arm swelling, born at 36 weeks by cesarean section for breech delivery, A, AP portable radiograph of the left forearm with the shoulder in external rotation shows apparent medial position of the forearm (arrow) with respect to the distal humeral metaphysis. No gross fracture is evident. B, C, Sagittal sonograms through the radiocapitellar and ulnar-trochlear articulations. The capitellum (C) and trochlea (T) are displaced posteriorly (double arrows) with respect to the humeral metaphysis (M). Their articulations with the cartilaginous radial head (R) and olecranon apophysis (O) are maintained. Note the echogenic joint effusion (single arrows) and stripping of the posterior periosteum (arrowheads).

Figure 11.9 Distal humeral SH injury and clavicular fracture. A three-week-old infant with history of a difficult extraction during vaginal delivery and ecchymosis over the shoulder and elbow. AP view of the right shoulder and humerus demonstrates irregularity of the physeal margin (white arrows) consistent with a SH injury. There is organized SPNBF along the medial aspect of the distal humeral metaphysis (thin black arrows). There is also mature callus about a mid-clavicular fracture (thick black arrow).

Although neonatal humeral physeal injuries may result in dramatic deformity related to a physeal growth disturbance, remarkable recovery of structure and function can occur despite dramatic initial displacements (Fig. 11.10).

These humeral physeal injuries occur with high-energy events, but since diagnosis may be elusive in the immediate postnatal period, neonates may present later with unexplained irritability, diminished extremity motion, and swelling. In such cases, an abusive injury may be suspected. Since the imaging features are identical to those seen with abuse, a careful birth history is important and review of available obstetric records is vital.

The incidence of femoral fractures with delivery has been estimated at 0.13 per 1000 live births, typically occurring in babies greater than 2600 g (11). It is common for diagnosis to be delayed because clinical findings may not be noted in the immediate postnatal period. Importantly, Morris et al. found that five of their seven infants with femoral shaft fractures were delivered by cesarean section, attesting to the major forces that may be applied during such extractions (11). As with humeral fractures, the injury may be audible during delivery (50). When other distracting factors are noted shortly after a cesarean birth, a femoral fracture may be incidentally identified on a customary “babygram” (Fig. 11.11). Femoral shaft fractures in normal infants are usually obliquely oriented and are commonly associated with impressive angular deformity.