Figure 5-21. GHJ effusion distending the posterior recess. [A] Axial 12-5 MHz US image obtained during external rotation of the shoulder clearly depicts fluid distension of the posterior recess (asterisk). [B] The finding is much less conspicuous with shoulder in neutral position. Infra= infraspinatus. Hum= humerus. 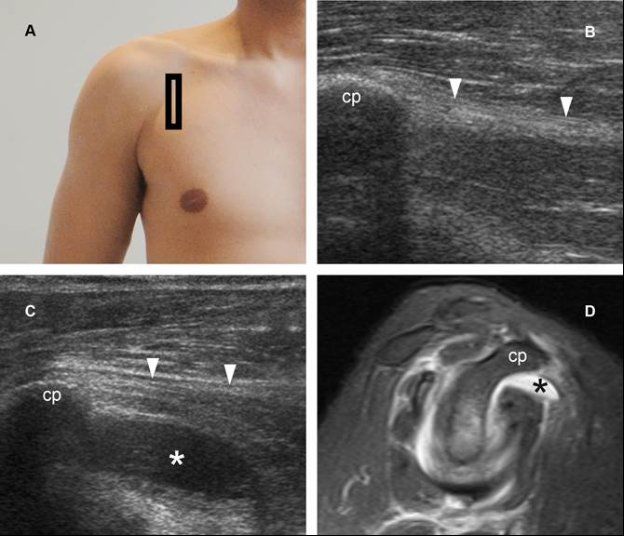 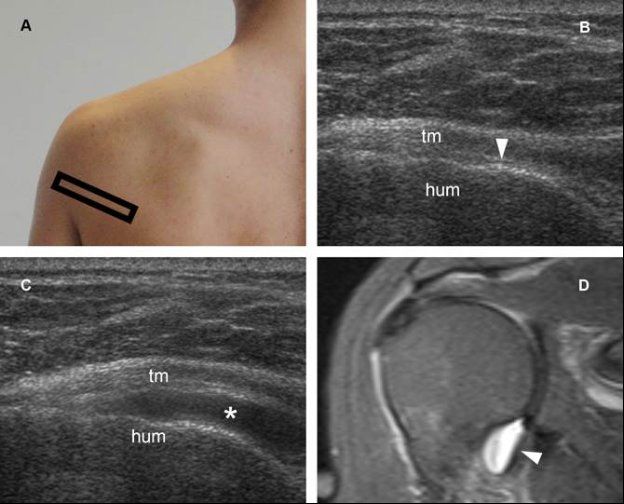 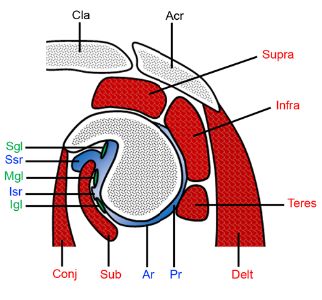 Distinction between joint effusion and synovial proliferation is intuitive when fluid is clear and anechoic, but may be challenging when US depicts hypoechoic or hyperechoic material distending joint recesses (video 5-8).60 Poor compressibility, lack of internal movements during graded compression, and internal flow on Doppler US all suggest synovial proliferation rather than complex fluid. GHJ effusion is mostly associated with rotator cuff tears, while synovial proliferation is usually associated with systemic inflammatory arthropathies (video 5-9). Septic effusion is rare, requires early diagnostic arthrocentesis for optimal outcomes, and is depicted as nonspecific anechoic, hypoechoic, or hyperechoic material distending joint space at US.

Primary GHJ osteoarthritis is extremely rare. Conversely, secondary osteoarthritis is much more prevalent, and usually occurs as the end result of chronic rotator cuff tears. Irish surgeon, Robert Adams is credited as the first to describe the clinical findings of GHJ osteoarthritis secondary to rotator cuff tear in 1857.61 However, it was not until 1977 that Charles Neer coined the term cuff tear arthropathy.62 The diagnosis of cuff tear arthropathy is based on clinical and radiographic findings. US may help suggest the diagnosis when a chronic massive tear of the supraspinatus tendon is demonstrated in conjunction with reduced acromiohumeral distance and rounded greater tuberosity of the humerus (figure 5-25). 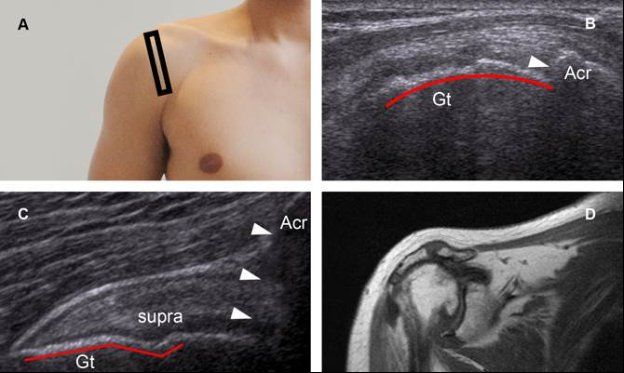 US is not considered a primary diagnostic modality to evaluate glenohumeral cartilage because of shadowing, but a small part of the articular cartilage covering the humeral head can be assessed for abnormalities. US demonstrates normal cartilage as a homogeneously hypo-anechoic structure delimited by thin hyperechoic margin at the interface with the synovial fluid (figure 5-26). 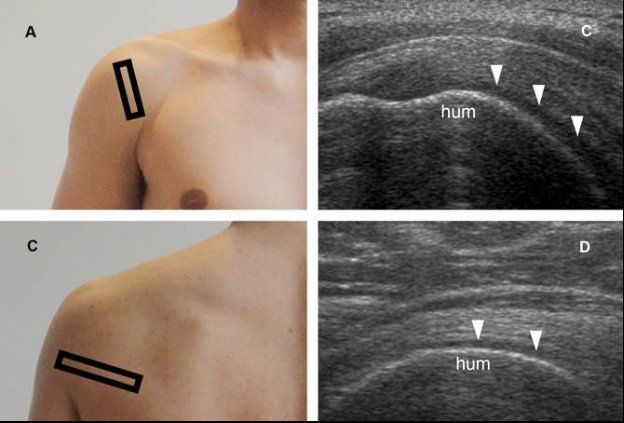 Chondrocalcinosis (see section 1.2.6) may be depicted as echogenic foci with no acoustic shadow within the hyaline cartilage covering the humeral head (figure 5-27).

GHJ instability occurs when static or dynamic stabilizers become incompetent and involve multiple different diagnoses with a broad range of underlying pathology. Many classification schemes have been developed related to degree (dislocation, subluxation, microinstability), direction (anterior, posterior, multidirectional), etiology (chronic microtrauma, acute trauma, congenital abnormality), and duration of symptoms (acute, chronic, recurrent). A dislocation occurs when humeral head dissociates from the glenoid fossa, while a subluxation is characterized by humeral head translation to the edge of the glenoid, beyond physiological limits, and is followed by selfreduction. Microinstability implies multidirectional hypermobility due to excessive capsular laxity. GHJ instability can also be subclassified into voluntary and involuntary, and some patients with voluntary instability have associated psychological pathology.63

The clinical presentation can range from acute frank dislocation to chronic non-specific shoulder pain. Although US is not indicated to specifically address GHJ instability,64 it may occasionally depict abnormal joint motion during provocative manoeuvers (video 5-10). Acute dislocations are largely produced by trauma and discussed in chapter 6 because of its association with proximal humerus fractures. Glenoid and humeral causes of GHJ instability are also associated to fractures and further discussed in chapter 6. Since rotator cuff tendons are a major component of the dynamic stabilizers of the shoulder, depiction of GHJ instability should prompt a careful scrutiny for rotator cuff tears. In the absence of penetrating trauma or infection, intra-articular gas (see section 1.2.7) is a reliable indicator of recent GHJ distraction (video 5-11).

Loose bodies composed of organized connective tissue are the commonest type and results from osteochondral fragments frequently associated with osteochondral lesions, synovial chondromatosis, and trauma. The detached cartilage does not lose its capability to absorb nutrients and oxygen from the synovial fluid and often increases in size, resulting in a smoother surface over time as the bony component of the osteochondral loose body gradually becomes completely surrounded by the chondral component. Radiographs may show the abnormality, but typically underestimate the problem because nonmineralized portions of the fragment are not radiographically apparent. At US, osteochondral loose bodies are depicted as echogenic structures with variable shadowing. Two common locations include the posterior recess (figure 5-28) and the long head of the biceps brachii tendon sheath (see figure 3-17). When entirely cartilaginous, the loose bodies are homogeneously hypo-anechoic and difficult to distinguish from surrounding fluid.

Fibrinous loose bodies are second in prevalence to organized connective tissue, consist of concentrically laminated masses of fibrin, and result from fibrinous degeneration of the infarcted synovial tissue or from bleeding within the joint. They are usually numerous, almost invariably associated with an effusion, and typically associated to degenerative or inflammatory joint disease. Fibrinous loose bodies may resemble rice grains, melon seeds, or adhesive wafers, and are not visible on radiographs. At US, they appear as multiple small hypoechoic structures surrounded by fluid, although in some cases they may be difficult to differentiate from adjacent hypo-echoic pannus due to similar echogenicity.

Foreign loose bodies are the rarest type and may result from a dislodged piece of surgical hardware or a penetrating injury.

Whatever the type, estimating the size of the loose bodies is important for better management planning as arthroscopic removal of larger fragments may be difficult and time consuming.66