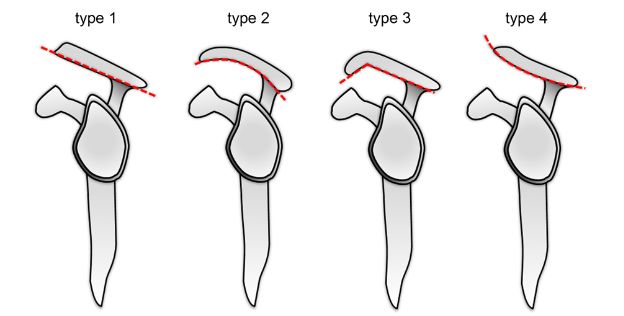 Figure 1-5. Acromion shape on sagittal plane. Four types of acromion shape have been described with type 3 hooked morphology associated with a much higher incidence of cuff tears.

Subcoracoid or anteromedial impingement is caused by mechanical attrition of the subscapularis between the coracoid and lesser tuberosity when the affected shoulder is flexed, adducted, and internally rotated.29 It is a rare condition and result in subscapularis tendon injuries.30

Glenoid, or posterossuperior, or internal impingement is considered a peculiar form of impingement since it does not affect superficial tendon fibers. On the contrary, it is secondary to mechanical compression of the deep articular surface fibers of the supraspinatus or infraspinatus tendons between different parts of the superior aspect of the glenoid fossa and the greater tuberosity of the humerus when the shoulder is externally rotated and abducted to 90 degrees.31 Its incidence is unknown and some authors have emphasized that such contact may take place during ordinary, nonathletic activities.32 Although the general concept of internal impingement has gained acceptance, substantial research is still required to define diagnostic criteria and appropriate management.

Tendons are metabolically active and require vascular supply for turnover. Although anatomical variations have been documented, the arterial supply to the anterior portions of the cuff is mainly provided by the anterior humeral circumflex and the supraescapular arteries, while the posterior humeral circumflex artery supplies the posterior portions.33

Several studies suggest that blood supply is not uniform in the supraspinatus tendon and describe an area of relative hypovascularity more susceptible to damage located 1 to 2 cm proximal to the insertion, the so called critical zone (figure 1-6).37-39 This region of sparse vascular supply may not be anatomical but functional and dependent on arm position (figure 1-7). 37 Arterial supply is also reduced with increasing age40-48, and at the articular side fibers, as opposed to the well-vascularized bursal side fibers.48,49 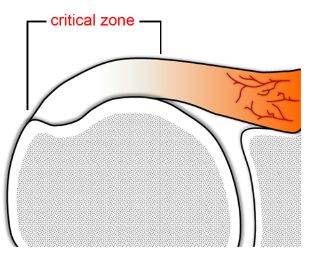 Figure 1-6. Critical zone. Schematic drawing of a coronal view of the shoulder demonstrates the critical zone of reduced vascularity located 1 to 2 cm proximal to the supraspinatus insertion. 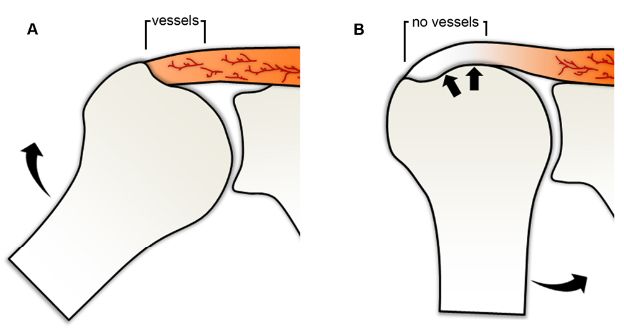 Figure 1-7. Critical zone. Schematic drawing of an anterior view of the shoulder shows the theoretical disposition of vessels within the tendon during [A] abduction and [B] adduction of the shoulder. Note the mechanism of wringing out the vessels by compression during shoulder adduction.

As a point of controversy, there is no consensus on the contribution of reduced vascular supply to rotator cuff pathology. Some authors have failed to show decreased arterial supply,50 while others showed relative hyperperfusion to the critical zone and at the tear edge.51,52 Interestingly, not only hypovascularity but also hypervascularity may be implicated in tendon disorders. Vascular endothelial growth factor (VEGF) is a critical regulator of neoangiogenesis, stimulating proliferation and migration of endothelial cells, though at same time enhancing MMPs and decreasing tissue inhibitor of MMPs, which in turn may cause disintegration of collagen and tendon disease.53-55 Mechanical overload, hypoxia and inflammatory cytokines play a major role for the regulation of VEGF expression in tendon disease.56

Tensile load may be a major stimulus for tendon degeneration.57 A proposed mechanism is via JNK-1 induced by mechanical load to tenocytes, which may cause cell apoptosis. Further evidence comes from in vitro studies demonstrating that tenocytes increase production of both prostaglandin E253,58 and leukotriene B454 when submitted to tensile load, and these mediators may contribute to degenerative tendon disease.55 Additionally, arterial supply is reduced when a tendon is submitted to maximal load,37 allowing reperfusion damage to occur following relaxation.15,59,60 Since tendon load can induce oxidative stress, most biochemical pathways described under the vascular theory may also apply to the mechanical theory. Tendon injury does not require a memorable episode of overload and may occur from repeated loading within the physiological range, because frequent microtrauma does not allow enough time for repair.61 Understimulation may be as damaging as overstimulation and the exact level of load necessary to maintain tendon homeostasis is unknown.62,63

There is growing evidence to support the role of increased levels of neuropeptides and neurotransmitters such as acetylcholine,64-66 catecholamines,67-69 glutamate,70,71 substance P,41,72 and calcitonin-gene related peptide72 in tendon disorders. These substances, either directly or indirectly, are involved in tendon hemostasis.73 Some of the nerve endings parallel the microvasculature of tendons and are believed to regulate vascular tone; other appear to terminate associated with mast cells, raising the possibility of collagen disintegration via neurally mediated mast cell degranulation. The density of mast cells in tendinopathy is 3 times that found in normal tendons,74 and these cells are capable of producing nerve growth factor.75 An additional feature of neural theory is that the expression of neuropeptides is not restricted to neurons as there is also an increase in non-neural neuropeptides with progressive tendon loading (figure 1-8).75 Whether these non-neural neuropeptides are expressed by tenocytes or other cells remains unknown. 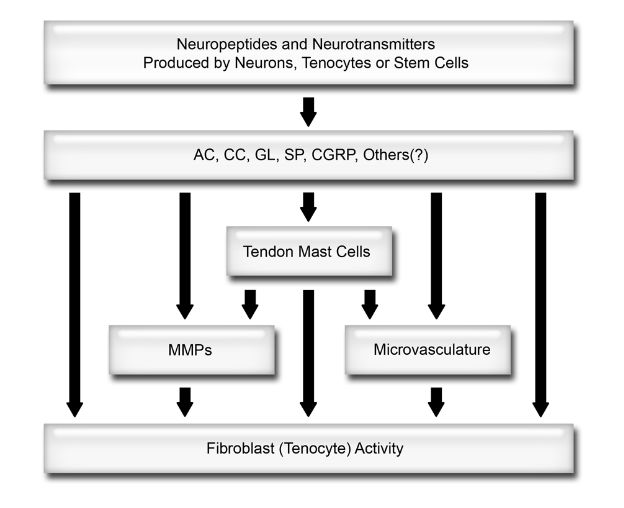 Tendons generate heat when submitted to loading, and temperatures of up to 45°C have been registered in the equine superficial digital flexor tendon during galloping.76 Although short periods of hyperthermia are unlikely to compromise cell viability, repeated and prolonged heat insults may result in tenocyte death and tendon degeneration.77,78

Genetic background may give rise to abnormal collagen, and sequence variation within the type-V collagen and tenascin C genes has been shown to be associated with Achilles tendinopathy.79,80 An increased relative risk of full-thickness tears in siblings of patients with known tears has also been described.81 Genetic factors may play a role not only in the development of tendon tears but also in their progression.82 Clinical presentation may likewise be influenced since specific genetic background may provide distinct sensibility to pain.

Tobacco has been associated with increased risk for rotator cuff tear, 83 increased tear size,84 and poorer outcome following repair.85,86 The relationship of smoking with increased risk for cuff tearing is dose and time-dependent.87 The mechanism involve noxious effects of both nicotine, which cause vasoconstriction and decreased delivery of oxygen to tissues,88 and carbon monoxide, which decrease cellular oxygen tension levels.89 Nicotine also negatively correlates with collagen deposition and repair at surgical wounds.90

Several studies suggest that diet may be another factor to affect tendon homeostasis. Increased levels of total cholesterol, triglycerides, and LDL in addition to decreased HDL have been related to full-thickness tears.91 Hypercholesterolemia may contribute to increased risk of tendon disorders in several ways. First, high levels of total cholesterol, triglycerides, and LDL are toxic to the vascular endothelium and impair micro- and macrocirculation. Second, deposition of cholesterol byproducts has been implicated in the formation of xanthomas, which may change mechanical properties of the tendon and result in an increased risk for tears.92 Third, hypercholesterolemia alter the extracellular matrix by damping the synthesis of noncollagenous proteins and/or blocking incorporation of glucosamine and cytidine thus leading to altered structure and function.93,94 Finally, hypercholesterolemia may be linked to increased body mass index and consequent increased load.

Food intake may also positively affect tendon homeostasis and reduce age-associated damage because weight-reducing strategies based on caloric restriction has been shown to reduce levels of reactive carbonyl derivatives, a marker of oxidative protein damage, in a rat model.95

Numerous systemic disorders have been associated with tendon abnormalities. Hyperglycemia from diabetes mellitus may induce non-enzymatic glycation between the glucose and free amino groups of lysine molecules thus leading to structural and functional impairment of tendons.96-100 More than 30% of patients with insulin dependent diabetes have calcific tendinopathy, usually asymptomatic.101 Calcific tendinopathy is associated not only to diabetes102-104 but also to thyroid and estrogen hormones metabolism disorders.105 Earlier onset of the symptoms and protracted clinical course are observed in patients with associated endocrine pathologies, suggesting that a classification in idiopathic and endocrine-related forms of the calcific tendinopathy may help treatment planning.

Tags: Ultrasound of the Shoulder
Jan 21, 2017 | Posted by admin in ULTRASONOGRAPHY | Comments Off on Pathogenesis
Premium Wordpress Themes by UFO Themes
WordPress theme by UFO themes