Figure 5-29. SClJ. Schematic drawing of an anterior view of the SClJ. An articular fibrocartilaginous disc divides the joint into two separate synovial spaces. The joint is supported by a thick capsule reinforced by the anterior (green) and posterior sternoclavicular ligaments. Additional passive stabilizers include the intra-articular disc ligament, the extra-capsular interclavicular (yellow) and the costoclavicular (gray) ligaments. Man= manubrium. Cla= clavicle.

The SClJ is not usually addressed during routine shoulder US unless there are clinical findings suggestive of pathology. Abnormalities are typically depicted by target evaluation because of point tenderness over the joint. As in the case of ACJ, the SClJ is best assessed on long-axis images using high-frequency linear-array probes (figure 5-30).

Figure 5-30. Normal SClJ. [A] Positioning of the probe. [B] Corresponding long-axis 12-5 MHz US image shows normal sternum (ste), clavicle (cla), and joint capsule (arrowheads). Note the smooth, rounded configuration at the margins of the joint.

The two most common abnormalities of the SClJ are osteoarthritis and dislocation. Slight asymptomatic asymmetry in proximal clavicle volume is a normal cosmetic variant that should not be confused with pathology.71,72 However, in the current era of defensive medicine, such esthetic concern, traditionally diagnosed through careful history and physical examination, is being increasingly referred for US.

Osteoarthritis is a common cause of pain related to the SClJ, but may also occur in asymptomatic individuals. As in the case of ACJ, degeneration of the SClJ is mostly a natural consequence of aging, starts as early as in the third decade, and become omnipresent with advancing age.73 Sonographic findings include joint space narrowing, distended joint capsule, hyperemia, and marginal osteophytes (figure 5-31). SClJ ganglion may be an associated finding (figure 5-32). Although degenerative changes tend to occur earlier, more frequently, and more severely in the clavicular when compared to the sternal surface,73 isolated clavicular abnormalities in the absence of joint space narrowing or sternal osteophytes is not typical for osteoarthritis and should raise the suspicion for alternative diagnosis such as condensing osteitis or osteonecrosis.

Condensing osteitis of the clavicle is an uncommon idiopathic condition predominantly seen in women of late childbearing-age and characterized by pain, sclerosis, and expansion of the inferior part of the medial end of the clavicle. The diagnosis requires high clinical suspicion and correlation with radiography, CT, MRI and/or cintilography. US has no role for diagnosis except to raise clinical suspicious when atypical findings for osteoarthritis are depicted. The pain is usually self-limited and improves with time, but bone expansion does not resolve significantly.74

Osteonecrosis of the medial end of the clavicle is a rare condition first recognized by Friedrich in 1924.75 Until 1987, only 28 cases have been described in English literature.71 The etiology remains obscure with microtrauma, nerve damage, and radiation implicated as possible causative factors.76-78 Most cases are unilateral, present with point tenderness over the medial end of the clavicle, and involve women ranging from 6 to 58 years old.78 US readily depicts resorption of the proximal clavicle as irregular cortical erosions (figure 5-33). Osteonecrosis of the medial end of the clavicle generally results in increased uptake of the radioisotope Tc-99m, whereas osteonecrosis in other anatomical sites often have normal or even cold bone scan results.80 Most patients improve in a period of months with conservative treatment.

The differential diagnosis of SClJ osteoarthritis also includes septic and systemic inflammatory joint disease. Because of some overlap in clinical and sonographic findings, further diagnostic workup may be required in dubious cases. The SClJ is affected in 30% of patients with rheumatoid arthritis, usually as a result of polyarticular disease.81 Isolated synovial proliferation may also result from minor trauma as a self-limited condition (figure 5-34).

SClJ dislocation is an uncommon condition that can result from direct trauma to the clavicle or indirect forces applied to the shoulder (figure 5-35). Posterior dislocations deserve special attention, as they have the potential to be life-threatening because of the risk of damage to vital structures in the mediastinum.82 SClJ subluxation is a different condition that must be differentiated from true dislocation. A dislocation occurs when medial end of the clavicle dissociates from the clavicular notch. A subluxation occurs when medial end of the clavicle translates to the edge of the clavicular notch, beyond physiological limits, and is followed by selfreduction. The diagnosis of both conditions is essentially clinical and can be reached by careful history and physical examination in the vast majority of patients.

Figure 5-35. Mechanisms of SClJ dislocation. Schematic drawings of a superior view of the SClJ demonstrates the mechanisms for [A] anterior and [B,C] posterior dislocation. Straight gray arrow indicates the location and direction of the force generating the finding. Curved red arrow indicates the movement of the clavicle secondary to this force. Most SClJ dislocations are anterior and result from motor vehicle collisions or sports trauma.

Spontaneous nontraumatic SClJ subluxation is usually anterior, asymptomatic, and affects young or middle-aged women. Generalized joint laxity and familial occurrence have been suggested in this group of patients.83,84 It is important to include dynamic evaluation when scanning SClJ for disease because subluxation may be dependent on the arm positioning.

The diagnosis of posterior SClJ dislocation requires high clinical suspicion and correlation with the mechanism of trauma, as soft tissue swelling may cause the false impression of an ordinary anterior dislocation at the physical examination. Routine standard radiographs are difficult to interpret because pathological findings are often obscured by overlying bones, and the serendipity view, as described by Rockwood, is often required to radiographically determine the clavicle position (figure 5-36). CT, however, is the imaging modality of choice, as it better delineates the SClJ and provides important information on the vital structures of the superior mediastinum.85 In experienced hands, US can also demonstrate SClJ dislocations (figure 5-37). Contralateral comparison is not obligatory for diagnosis, but can be useful for educational purposes and in equivocal findings. In trauma setting, the differential diagnosis of a palpable lump over the medial clavicle in patients younger than 25 years old should include fracture through the physeal plate.85 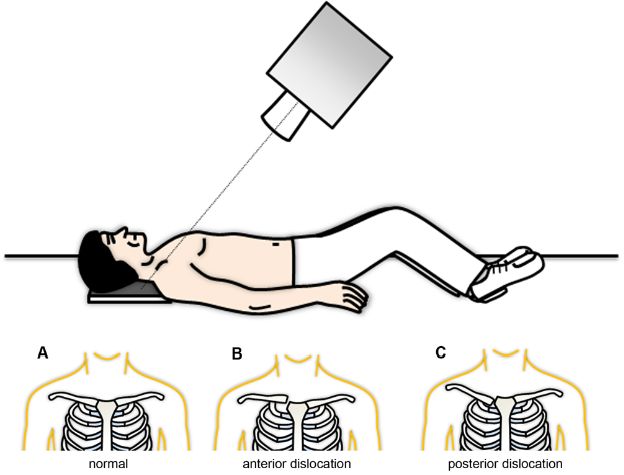 Figure 5-37. Anterior SClJ dislocation. [A] Positioning of the probe. [B] Corresponding 12-5 MHz US image depicts abnormal widening of the SClJ (β), hypoechoic distension of the capsule (arrowheads), and anterior dislocation of the clavicle relative to the sternum (α). Ste= sternum. Cla= clavicle.

Management for acute SClJ dislocation consists of attempted early closed reduction, reassurance, and conservative support. Persistent anterior prominence is a common sequela that has no functional significance. In acute posterior SClJ dislocation, open reduction is usually indicated if closed reduction is unsuccessful. Subluxation requires no specific treatment; if mild pain is present, it is usually self-limited and spontaneously subsides within a few months. Physeal plate clavicle fractures are generally left alone to eventually heal and remodel without intervention if not significantly displaced.86