The role of characterization of plaque as part of the duplex carotid examination is becoming more important as the significance and relationship of “vulnerable” plaque or unstable plaque relative to stroke become better understood. While the degree of stenosis, as defined by increased systolic and diastolic internal carotid artery (ICA) velocities and abnormal ICA/ common carotid artery (CCA) ratios, is still of great importance, other parameters, particularly the character of carotid plaque, are beginning to be considered more significant when choosing the type and method of carotid intervention.1–3

Stroke, as a result of atherosclerotic disease, is the third leading cause of death in the United States. Approximately 20% to 30% of strokes are thought to be the result of ischemia from severe flow-limiting stenosis due to atherosclerotic disease involving the extracranial carotid arteries.4 It is also estimated that 80% of strokes are thromboembolic in origin, with carotid plaque as the embolic source.3

Embolism, not flow-limiting stenosis, is the most common cause of transient ischemic attacks (TIAs). Fewer than half of patients with documented TIAs have hemodynamically significant stenoses. It is important to identify, therefore, atherosclerotic lesions that may contain hemorrhage or ulceration that can serve as a nidus for emboli that cause both TIAs and stroke and in particular, low-grade atherosclerotic lesions containing hemorrhage that might otherwise be ignored.5 Polak and colleagues6 have shown that plaque, particularly hypoechoic (heterogeneous) plaque, is an independent risk factor for developing a stroke. Of patients with hemispheric symptoms, 50% to 70% demonstrate hemorrhagic or ulcerated plaque. Significantly, plaque analysis of carotid endarterectomy specimens has implicated intraplaque hemorrhage as an important factor in the development of neurologic symptoms.7–14

Plaque characterization, performed appropriately, can be useful in determining which patients are at greatest risk for embolic stroke as a result of identifying “vulnerable” or unstable plaque.

Atherosclerotic plaque is initially revealed sonographically by an increase in the combined thickness of the intima and media layers and subsequently by echogenic material that encroaches on the arterial lumen.15–23

Homma and colleagues22 found that the normal intima-media thickness in the CCA—as measured in areas void of plaque—increases linearly with age, from a mean of 0.48 mm at age 40 years to 1.02 mm at age 100 years, following the formula (0.009 × age in years) + 0.116 mm. In addition to age-related change, intima-media thickness also increases in response to early plaque formation; thus, the intima-media measurement can be used in clinical settings as a marker for cardiovascular risk as well as in research.17,19–21,23–27

Thickening of the intima-media complex implies occult plaque formation, but plaque may, of course, be seen directly with ultrasound when it achieves sufficient size to protrude into the carotid artery lumen. Small carotid artery plaques are very commonly present in individuals older than 50 years,20–22,25,27 and the prevalence of plaque increases with age to a high of 80% for men between 80 and 100 years old. (The prevalence is somewhat lower for women.) Because of their prevalence, the significance of small carotid plaques is uncertain. Large and potentially dangerous plaques are not common, with a reported incidence in large population-based studies of 2% or less for men and women 50 years and older.20

The interobserver variation for plaque detection ranges from fair to good among reported studies.24–2728 The causes of such variation include the technologists’ skill level, ultrasound image quality, failure to examine the same vascular segment, lack of a uniform definition of findings indicating the presence of plaque, lack of careful technique and uniform accepted protocols for evaluating plaque, lack of combining both the sagittal and transverse images in assessing plaque characteristics, and inappropriately attempting to characterize plaque when using color and power imaging modes. With improvements in instrumentation and methods, interobserver variation may be expected to improve with time, but technical diligence and quality assurance methods are required to ensure accurate plaque detection and assessment.

Plaque is evaluated most accurately with gray scale, without the use of color or Doppler imaging. The patient should be studied carefully to determine plaque location, extent, thickness, severity, and texture, as well as to assess luminal narrowing.29 Plaque should always be studied, scanned, and evaluated in both the transverse and sagittal projections (Figure 8-1).14,30 Both views are necessary because plaque is irregular and may not be completely included in the sagittal view. A properly obtained transverse view ensures that the full plaque is being studied and is therefore the most important view in gray-scale plaque assessment. In describing plaque extent, the observer should report the location and in which vessels the plaque is present (CCA and/or ICA) and the approximate length. Severity refers to the thickness of plaque and the degree of luminal narrowing. This is more difficult to define sonographically because plaque varies in thickness from one location to another. The best means for assessing carotid plaque thickness is from transverse (short-axis) images, which most accurately show the maximum thickness of the plaque and the resultant degree of luminal narrowing. Assessment of luminal narrowing or stenosis should always be performed in conjunction with pulsed Doppler velocity criteria. Plaque severity can be grossly overestimated or underestimated when using longitudinal images alone.

FIGURE 8-1 Line diagrams showing the value of obtaining both transverse and sagittal images when characterizing plaque. In the sagittal plane, images can be obtained that would falsely simulate homogeneous plaque (A; line C) or heterogeneous plaque (B, line D). Correlation in both planes is necessary to be certain that the plaque is characterized correctly.

When reporting plaque severity, it is suggested to use generic terms, such as minimal, moderate, and severe. In evaluating texture, careful assessment must be made to estimate the degree of sonolucency within the plaque with gray-scale imaging. Most importantly, great care and effort must be taken to evaluate the plaque in the transverse as well as the sagittal projection. We have found it most useful to initially assess the plaque to determine the severity, so that we can correlate with the Doppler assessment that follows. Then, we employ the use of color, power, and Doppler spectral analysis to grade the degree of stenosis.

Characterization of Plaque: Homogeneous or Heterogeneous

Two major methods are used to characterize plaque: the homogeneous-heterogeneous terminology9,14,29–34 (Bluth classification) and the International Classification System.7,35 The classification systems use different terminology to describe plaque morphology. The International Classification System describes the plaque as either uniformly or predominately sonolucent (hypoechoic) or echogenic (hyperechoic). The Bluth classification utilizes heterogeneous as greater than 50% sonolucent (hypoechoic) and homogeneous to describe plaque that is greater than 50% echogenic (hyperechoic). The systems correlate to one another: a Bluth heterogeneous plaque corresponds to types 1 and 2 of the international system and a Bluth homogeneous plaque corresponds to types 3 and 4. Type 5 of the international system refers to plaque that cannot be classified because of calcifications or poor visualization (Table 8-1). 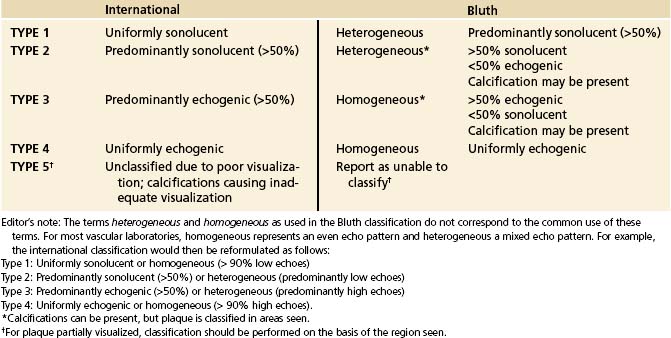 An important focus of these classification schemes is determining the degree of sonolucency within the visualized plaque. With international type 1 plaque, the appearance is uniformly and completely (90% or more) sonolucent. With type 2, the plaque is greater than 50% sonolucent but contains echogenic areas (Figure 8-2). The surface may be either smooth or irregular. International type 3 plaque has less than 50% sonolucency; in other words, primarily echogenic. Type 4 plaque is uniformly and completely echogenic. A Bluth homogeneous plaque is inclusive of all plaque that is less than 50% sonolucent and includes plaque that is uniformly echogenic but also contains plaque with some small sonolucent areas (Figure 8-3). The surface of the plaque is always smooth. Calcifications can be seen in either of the plaque types and are not part of the classification scheme in determining heterogeneous or homogeneous plaque. Type 5 in the international system defines calcifications in the plaque that obscure proper assessment. 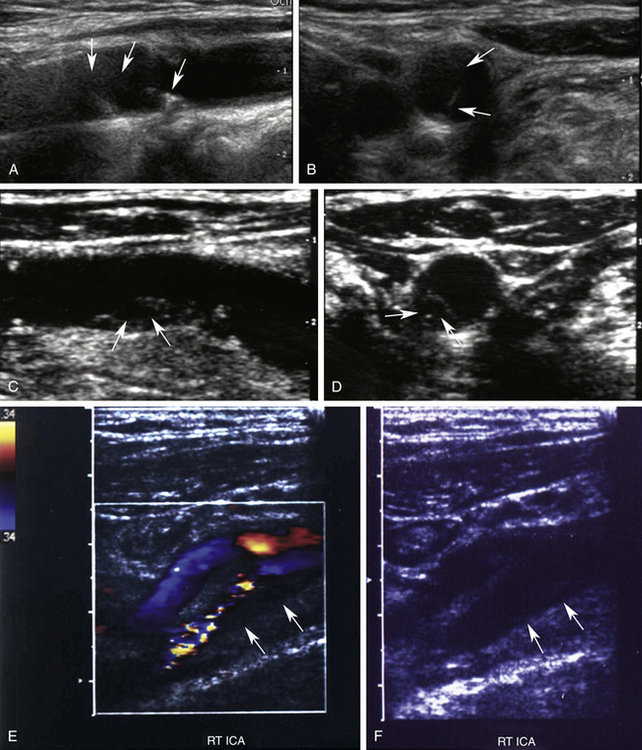 FIGURE 8-2 Heterogeneous plaque. Sagittal (A) and transverse (B) images of the internal carotid artery (ICA), showing almost completely sonolucent plaque (arrows), consistent with heterogeneous plaque (type 1). Note smooth plaque surface. Sagittal (C) and transverse (D) images of the ICA showing focal sonolucent areas (arrows) within the plaque greater than 50% of volume, corresponding to heterogeneous plaque (type 2). Note the irregular surface of the plaque. Sagittal (E) image of the ICA, showing heterogeneous sonolucent plaque (arrows) most evident on color flow duplex imaging by the small displaced residual lumen. The plaque is completely sonolucent (type 1) and indicative of acute hemorrhage. On the gray-scale image alone (F), plaque may be easily overlooked because of the degree of sonolucency. However, the color flow Doppler images showing the displaced residual lumen enable the correct diagnosis. 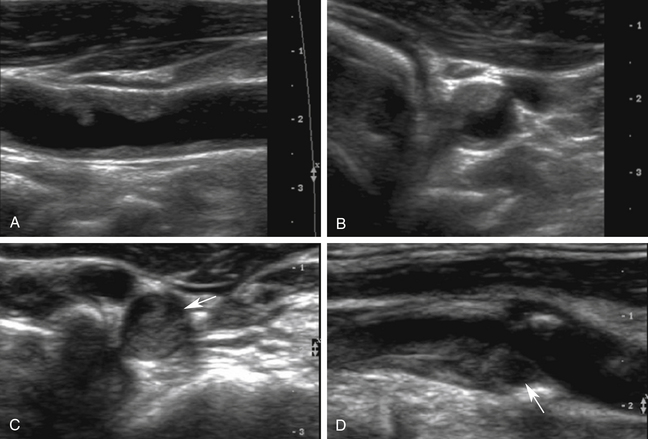 Plaque types 1 and 2, are believed to be associated with intraplaque hemorrhage and/or ulceration and are considered unstable, “vulnerable,” and subject to abrupt increases in plaque size following hemorrhage or embolization.30,31,33,36,37 Types 1 and 2 plaque are typically found in symptomatic patients with stenoses that are greater than 70% of diameter (see Figure 8-2). However, this type of plaque can also be seen in patients with a low degree of stenosis. Types 3 and 4 plaque are generally composed of fibrous tissue and/or calcification. These types of plaque are generally more benign, stable plaques that are common in asymptomatic individuals (see Figure 8-3). Echogenic (homogeneous) plaques are much more commonly identified than sonolucent (heterogeneous) plaques, occurring in 80% to 85% of patients examined.

Sonography has been shown in multiple studies to accurately determine the presence or absence of intraplaque hemorrhage (sensitivity, 90% to 94%; specificity, 75% to 88%).* Therefore, if examiners carefully follow the appropriate methodology and classification system, they can be confident in advising patients and referring physicians about the stability or potential “vulnerability” of the plaque identified. In centers where accuracy has been proven, plaque characterization is now being considered as a key component in determining therapeutic plans and interventions.

The exact pathophysiologic explanation and mechanism for the development and progression of carotid plaque are not completely understood. Some contend that atherosclerosis and plaque buildup are responses to injury that are mediated (or directed) by the endothelial cells that line the arteries.28,40–43