A newborn male presents with flattening of the nasal bridge, mild respiratory distress, and unusually short, broad distal phalanges of the hands and feet. 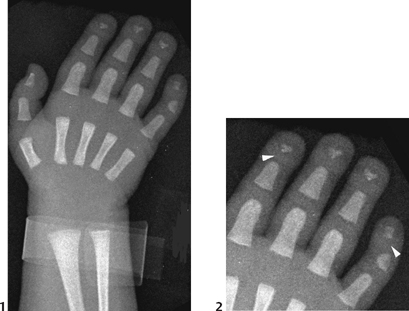 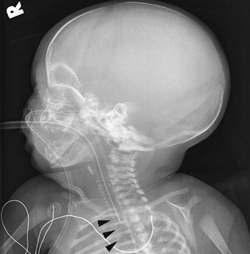 The AP radiograph of the hand shows abnormal morphology of the second through fourth distal phalanges, with distal broadening, proximal narrowing, and shortening of the tufts (Fig. 117A1), with puncta at the distal phalangeal epiphyses (Fig. 117A2, arrowheads). Dramatic calcification of the tracheal cartilaginous rings is seen on the oblique neck and upper chest radiograph (Fig. 117B, arrowheads). 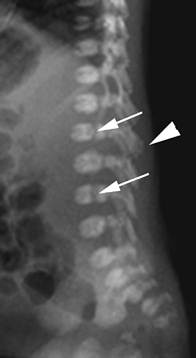 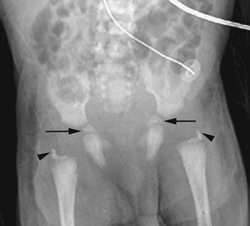 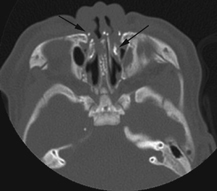 The most significant entities in the differential diagnosis for stippled epiphyses in the newborn are:

The pathogenesis of epiphyseal and extraskeletal cartilaginous calcific stippling has been best studied in a rat model of warfarin embryopathy. Rats administered warfarin produce offspring with premature punctate calcification of the nasal septum and snout, with resultant shortening and narrowing of the nasal passages. They also demonstrate abnormal calcific bridges within the physes of long bones and vertebrae. Within the nasal septum and epiphyses, chondrocytes are decreased in number and are abnormally clustered, demonstrating a disorganized pattern with premature punctate calcification within their surrounding matrix. These observations were confirmed by Barr and Burdi (1976) in their study of a human fetus with warfarin embryopathy.

Similar findings have been reported in histologic analysis of human patients with CDPR. These patients demonstrate clumps of disorganized epiphyseal chondrocytes separated by abnormal fibromuscular tissue containing punctate calcifications. Gaulier and colleagues (1987) reported similar findings in a patient with classic Conradi-Hünermann syndrome (CDP-XD); this patient also showed intramural calcification within epiphyseal vascular channels. Two reports of auricular biopsies in patients with Keutel syndrome (Keutel, 1972) describe multifocal, abnormal, progressive cartilaginous ossification. However, there has been no evidence to suggest that focal cartilaginous hemorrhage causes epiphyseal stippling in any of these disorders.

Matrix GLA protein (MGP) is produced by cartilage and is found in all noncalcified cartilaginous tissues. When properly carboxylated, its function is to inhibit hydroxyapatite formation within cartilage. Inactive, decarboxylated MGP is found in the nasal and epiphyseal cartilage of warfarin-treated rats; perhaps poor or absent MGP carboxylation represents the end result of numerous divergent metabolic pathways that produce the phenotype of chondrodysplasia punctata.