A female infant presents with palpable abdominal masses. Oligohydramnios had been noted in utero. 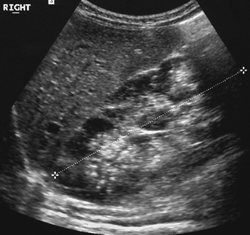 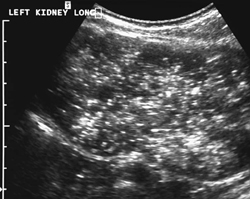 Longitudinal ultrasound images of the right (Fig. 78A) and left kidney (Fig. 78B), the latter from a prone position, show two enlarged hyperechoic kidneys with no corticomedullary differentiation. A relatively hypoechoic rim to the right kidney and prominent hyperechoic foci within the left kidney are noted. Both kidneys measured 9 cm in bipolar lengths, significantly above the 90th percentile for age.

ARPKD has been termed infantile polycystic kidney disease. It is also known as hepatorenal cystic disease due to the association of renal cysts arising from the tubules and hepatic cysts from the bile ducts. The incidence is 1 in 20,000. Renal involvement is bilateral with normal collecting systems. Hepatic fibrosis with portal hypertension is the predominant clinical problem in patients presenting later in childhood.

The ARPKD locus has been mapped to the short arm of chromosome 6. All phenotypic variants appear to result from mutations in a single gene.