A 3-day-old newborn girl has abdominal ultrasonography for investigation of hematuria, which had been preceded by septicemia. 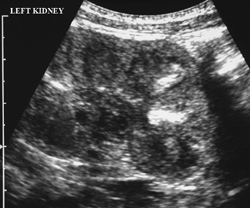 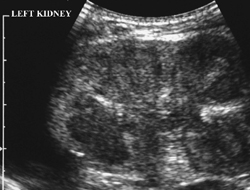 The left kidney is echogenic on these longitudinal ultrasound images with poor corticomedullary differentiation (Figs. 86A and 86B). Within some of the medullary pyramids, linear areas of increased echogenicity are present, probably representing abnormal interlobar veins. Overall, the left kidney is enlarged. Venous signals from the left kidney were difficult to achieve on Doppler examination. The right kidney is normal.