A 12-year-old female presents with a 2-month history of a dull ache in the left knee. 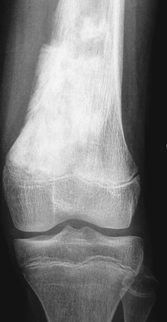 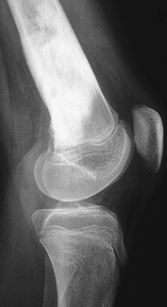 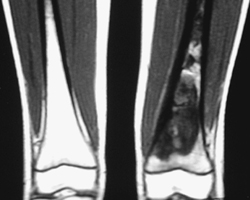 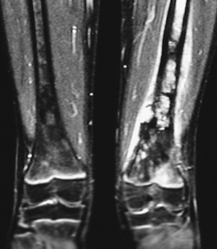 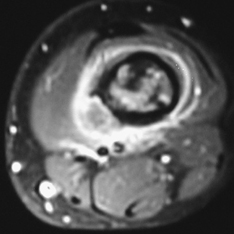 Frontal (Fig. 97A) and lateral (Fig. 97B) plain radiographs of the left knee demonstrate a destructive and poorly marginated lesion within the distal femoral metaphysis (Figs. 97A and 97B). The lesion shows extensive areas of sclerosis. Interrupted periosteal new bone is present proximally with demonstration of a Codman’s triangle. MRI depicts abnormal inhomogeneous low signal intensity within the left metaphyseal and diaphyseal marrow on T1-weighted imaging and inhomogeneous signal increase on T2-weighted imaging (Figs. 97C, 97D, and 97E). There is cortical disruption with loss ofsegments of cortical bone. Following gadolinium administration, there was an inhomogeneous enhancement throughout the region and within a circumferential soft tissue mass. Areas of very low signal intensity remain unchanged between sequences.

OS accounts for ~60% of the primary malignant bone tumors found in children and adolescents, generally occurring in the appendicular skeleton (80%) and arising in the metaphyseal region (90%). The peak incidence is in the second decade, with boys affected twice as often as girls. Overall incidence of OS is 2 to 3 per million.

Etiologically, OS can be divided into primary (predominating in the metaphyses) and secondary (arising in underlying disease; Paget’s, fibrous dysplasia, and multiple enchondromas). Radiation is a well-documented causal agent in OS development usually seen 7 to 15 years after radiation treatment. Loss of function of the p53 and Rb tumor suppressor genes is believed to play a role in tumorgenesis. The incidence of OS is increased among patients with retinoblastoma, likely due to germline mutations of the Rb gene, and ~3% of OS patients have a mutation of the p53 gene.

The typical patient presents with a few months’ history of dull aching pain within an extremity. An increase in pain severity can reflect cortical penetration by tumor or pathologic fracture. Approximately 50% of OS are found about the knee, most commonly in distal femoral metaphysis with the second most common site being the proximal humerus. Eighty percent of patients have no clinically detected metastatic disease at presentation. Pallor, fever, and weight loss suggest dissemination and are rare at presentation. 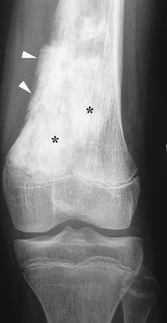