• The spinal accessory nerve arises from the cervical spinal cord (levels C-1–5) from a column of ventral horn cells that together are called the accessory nucleus (Fig. 11.1). The spinal accessory rootlets exit the cervical cord and unite to form a single spinal root that ascends posterior to the dentate ligament, enters the cranium via the foramen magnum, and then exits the cranium through the pars vascularis of the jugular foramen. The accessory nerve then descends obliquely in the carotid space between the internal carotid artery (ICA) and the internal jugular vein (IJV), across the anterior surface of the atlantal transverse process posterior to the stylohyoid and digastric muscles, to enter the deep aspect of the sternocleidomastoid muscle, which it penetrates and supplies. Emerging lateral to the sternocleidomastoid muscle in close proximity to the great auricular nerve (sensory branch of cervical plexus from C-2/C-3), it crosses the posterior cervical triangle (the most common site of iatrogenic injury) on the surface of the levator scapulae muscle to end in and supply the trapezius muscle (Fig. 11.2). The posterior cervical triangle is formed by the anterosuperior border of the trapezius muscle, the posterior border of the sternocleidomastoid muscle, and the middle third of the clavicle.

• The so-called cranial root of the accessory nerve has been described as a group of fibers that arise from the caudal portion of the nucleus ambiguus (the more cranial portions of which also supply branchial motor innervation to cranial nerves [CNs] IX and X), and emerge from the medulla as several rootlets in the postolivary sulcus (Fig. 11.3). Along with the vagus nerve proper, the cranial root runs laterally in the cerebellomedullary cistern and passes through the pars vascularis of the jugular foramen (Fig. 11.4). At the level of the superior vagal (jugular) ganglion, fibers from the cranial root blend into the vagus nerve and are distributed with the pharyngeal and superior laryngeal branches of CN X to supply the pharynx and larynx. Therefore, it is best to consider the cranial root of the accessory nerve as a part of the vagus nerve and functionally completely separate from the spinal accessory nerve. 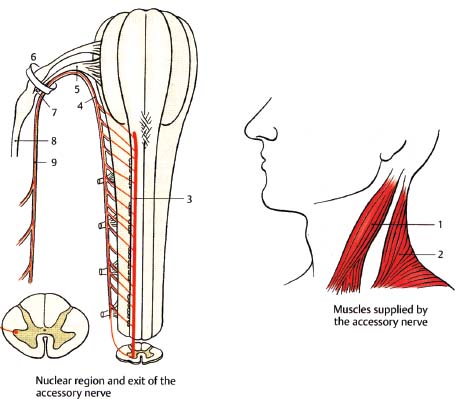 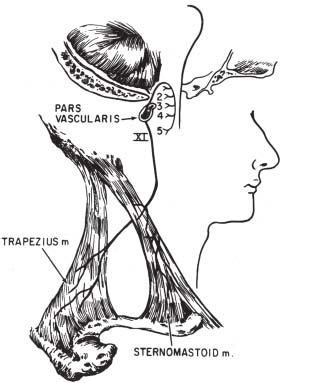 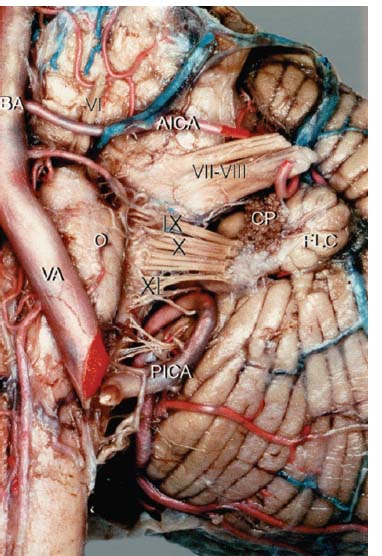 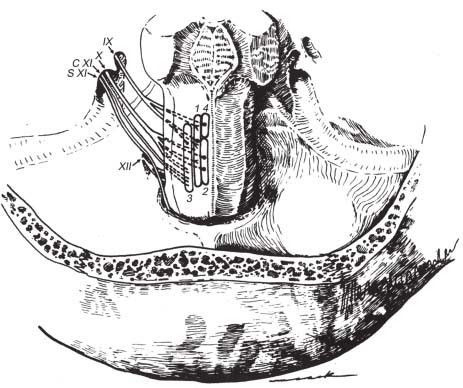 • Motor evaluation. Injury to the spinal accessory nerve results in paresis and/or atrophy of the sternocleidomastoid and trapezius muscles.

Trapezius paresis. Manifests as shoulder drop, difficulty raising abducted arm above horizontal. Test by observing with inspection and palpation while having the patient shrug the shoulders against resistance. Bilateral trapezius paresis results in weak neck extension. Because of partial innervation of the trapezius from the cervical plexus, lower trapezius function may be spared in pure accessory palsies.

• Isolated CN XI palsy may occur at the level of the neck with the following: