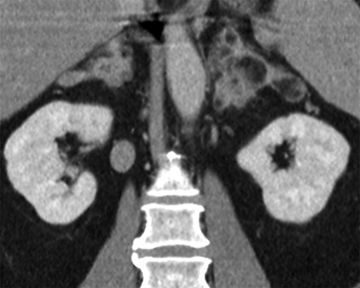 2    Attenuation measurements are the cornerstone of adrenal nodule characterization with CT. Which of the following adjustments will have the greatest effect on measured CT attenuation 1 minute after the administration of intravenous iopamidol 300 in a scan obtained and reconstructed with the following parameters: 120 kVp, 200 fixed mA, 5-mm collimation, and filtered back projection?

3    A 50-year-old male with history of clear cell renal cell carcinoma status post–left nephrectomy presents for characterization of a right adrenal nodule detected on follow-up imaging. Images represent dual-echo gradient-recalled echo T1-weighted imaging with the following echo times at 1.5 Tesla: 2.2 msec (image on LEFT) and 4.4 msec (image on RIGHT). Signal intensity measurements within the adrenal mass are as follows: 144 (image on LEFT) and 175 (image on RIGHT) (18% signal loss). If there are no comparison studies, what is the best next step? 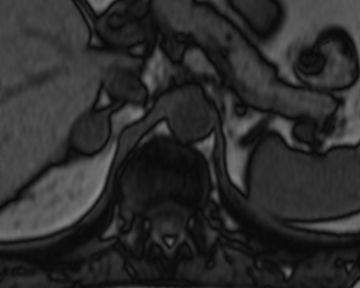 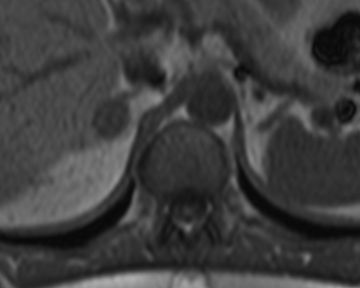 4    A 63-year-old female with a history of gastric cancer presents for characterization of a 3.3-cm adrenal mass. There are no comparison images. Regions of interest drawn in the center of the mass on triphasic adrenal protocol CT are as follows: (a) unenhanced: 16 Hounsfield units; (b) 1-minute delay: 55 Hounsfield units; and (c) 15-minute delay: 28 Hounsfield units. What is the calculated absolute percent washout? 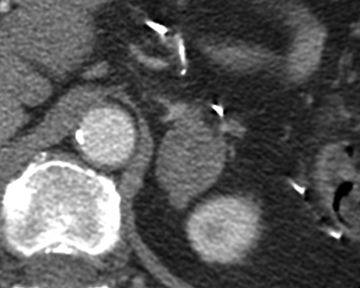 5    A 54-year-old female with node-positive invasive lobular breast cancer has a 2.1-cm homogeneous right adrenal mass. Adrenal protocol CT is performed utilizing 1-minute and 15-minute delays. Relative washout is calculated to be 50%. Which of the following is the most likely diagnosis?

6    A 60-year-old male with hypertension and right lower quadrant pain undergoes a CT of the abdomen and pelvis to rule out appendicitis. An incidental 1.5-cm homogeneous right adrenal mass is identified. He has no other relevant medical history. What is the estimated risk that this adrenal nodule is malignant? 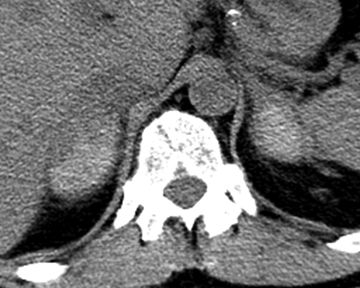 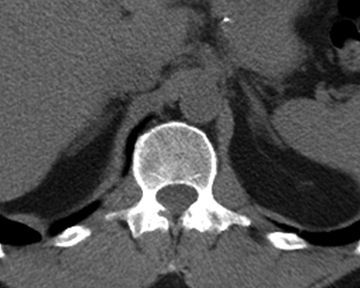 8    A 40-year-old female with postprandial pain and no other past medical history undergoes a right upper quadrant ultrasound. The gallbladder and biliary tree are normal, but an incidental 2.0-cm mass is identified in the right suprarenal fossa. An abdominal MRI follows confirming that the mass arises from the right adrenal gland. India ink artifact is observed within the mass encircling a 1.2-cm internal nodule. What is the most likely diagnosis?

10    A 25-year-old male with a hereditary paraganglioma–pheochromocytoma syndrome undergoes an I123-MIBG study. What is the best diagnosis? 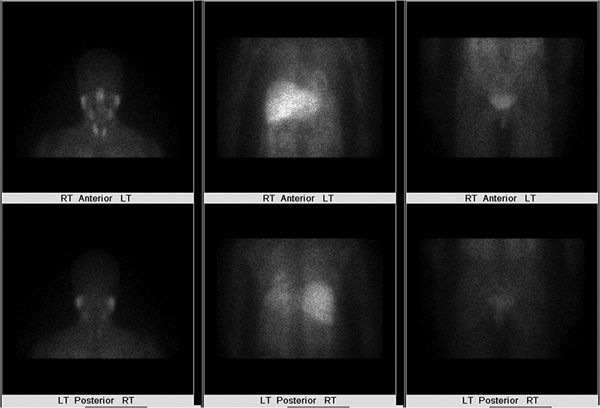 11    T1-weighted dual-echo gradient-recalled echo imaging is used for the detection of intracellular lipid and macroscopic fat. With this sequence, when fat and water protons are out of phase, fat protons are shifted a certain distance along the frequency-encoding axis depending on the receiver bandwidth and field strength. What is the approximate calculated fat/water chemical shift at 1.5 Tesla? Use the following formula:

12    A 56-year-old male with no history of malignancy and suspected primary hyperaldosteronism undergoes an adrenal protocol CT demonstrating a 1.5-cm left adrenal nodule with 70% absolute washout. The right adrenal gland is normal. What is the best next step? 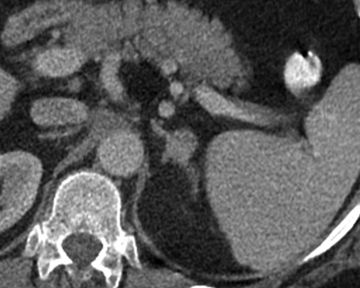 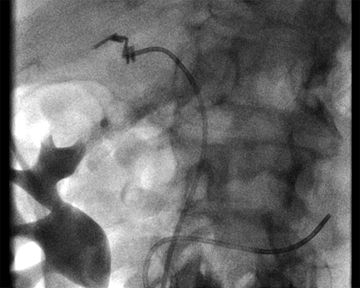 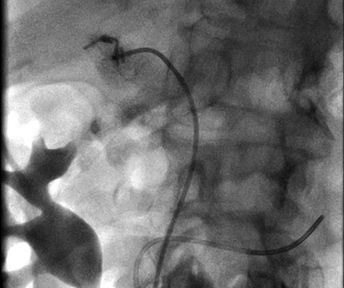 14    A 55-year-old male with non–small cell lung cancer and a 1.5-cm homogeneous right adrenal nodule presents for triphasic adrenal protocol CT. Which of the following image–time combinations has been shown to be most effective for adrenal nodule characterization?

15    A 62-year-old female with invasive ductal carcinoma of the breast and an indeterminate 1.5-cm left adrenal nodule undergoes a staging PET study. Which of the following adrenal nodule characteristics has the highest negative predictive value for metastasis?

16    A 38-year-old female with early-onset diabetes mellitus presents with a dark rash covering her neck and armpits. CT imaging is performed and demonstrates a 4.9-cm left adrenal mass. An image representative of the entire mass is shown below. The patient has no history of malignancy. What is the best next step?

17    One of the fundamental sequences of adrenal protocol MR is T1-weighted dual-echo gradient-recalled echo imaging for the detection of intracellular lipid and macroscopic fat. Which of the following correctly describes a difference between gradient echo imaging and spin echo imaging?

A.  Gradient echo imaging usually has a longer TR.

B.  Gradient echo imaging usually has a larger flip angle.

18    A 70-year-old female with lung cancer and an indeterminate 2.2-cm left adrenal mass presents for percutaneous biopsy. Which of the following positional maneuvers will most effectively reduce the risk of pneumothorax during the biopsy while minimizing risk to other structures?

A.  Decubitus, ipsilateral side down

B.  Decubitus, contralateral side down

19    A 32-year-old male (body mass index: 22 kg/m2) with intermittent diaphoresis, palpitations, and early-onset hypertension (190/110) presents for adrenal protocol CT. What is the serious adverse event risk of administering intravenous low-osmolality iodinated contrast material to a patient with pheochromocytoma who is not receiving alpha- and beta-blockade?

A.  80% chance of a serious adverse event

B.  30% chance of a serious adverse event

20    A 62-year-old male with clinical-stage T1cN0Mx Gleason 5 + 4 = 9 prostate cancer and no signs of adrenal hyperactivity presents for MR characterization of a 2.4-cm right adrenal nodule. Images represent dual-echo gradient-recalled echo T1-weighted imaging with the following echo times at 1.5 Tesla: 2.2 msec (image on left) and 4.4 msec (image on right). What is the best next step? 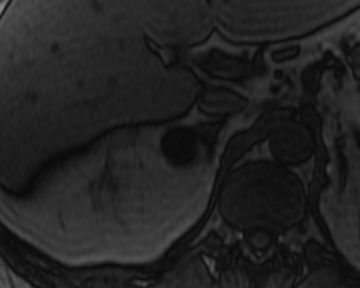 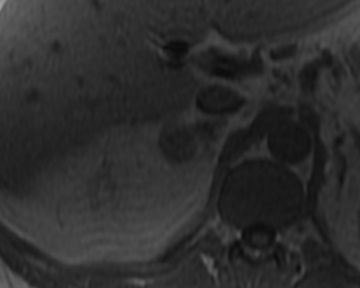 22    A 60-year-old female with right lower quadrant abdominal pain undergoes a CT of the abdomen and pelvis demonstrating perforated appendicitis and an incidental finding in the left adrenal gland. The following image is representative of the entire gland. Which of the following is most strongly associated with this abnormality?

23    A 58-year-old male with mild hypertension (140/90) managed with one medication and no history of malignancy undergoes an abdominal MRI that shows a 3.2-cm enhancing mass in the right adrenal gland. No intracellular lipid or macroscopic fat is identified. The left adrenal gland is normal, and the patient is asymptomatic. What is the best next step? 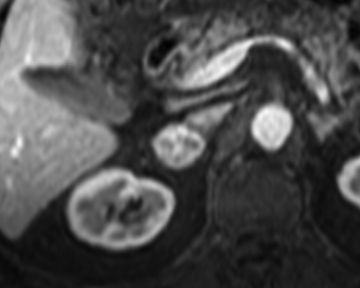 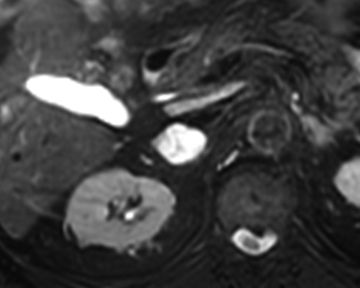 B.  Alpha- and beta-adrenergic blockade

24    A 45-year-old male with a right adrenal myelolipoma undergoes MR imaging. The following T2-weighted images were acquired without (left) and with (right) a conventional inversion recovery technique. Along what vector do the protons align in conventional inversion recovery imaging immediately following the preparation radiofrequency pulse (applied before the excitation pulse)? 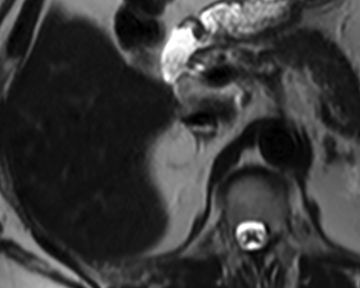 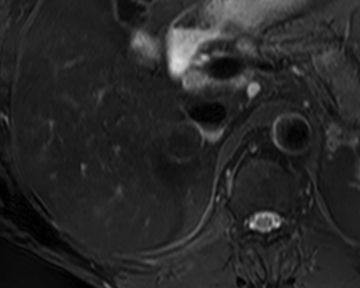 A.  0 degrees (with main magnetic field)

25    A 51-year-old male with no comparison imaging and a recently diagnosed obstructing sigmoid colon cancer presents for staging CT of the chest, abdomen, and pelvis. Imaging demonstrates the known colon mass, enlarged regional lymph nodes, and a 2.2-cm left suprarenal abnormality. What is the best next step? 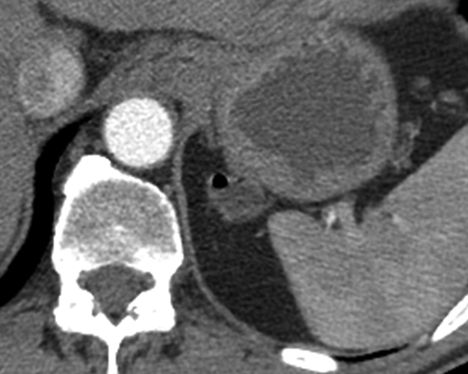 26    A 28-year-old male with suspected pheochromocytoma is scheduled to undergo an I131-MIBG scan to confirm the diagnosis and evaluate for distant disease. Which organ is at greatest risk of radiation-induced carcinogenesis if no precautionary measures are taken?

27    A 4-year-old girl with recurrent abdominal pain and unexplained fevers presents with a right suprarenal mass. What is the most likely diagnosis? 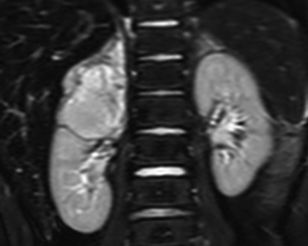 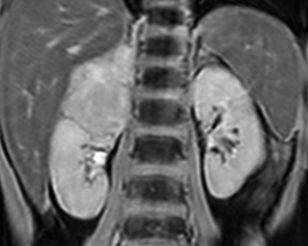 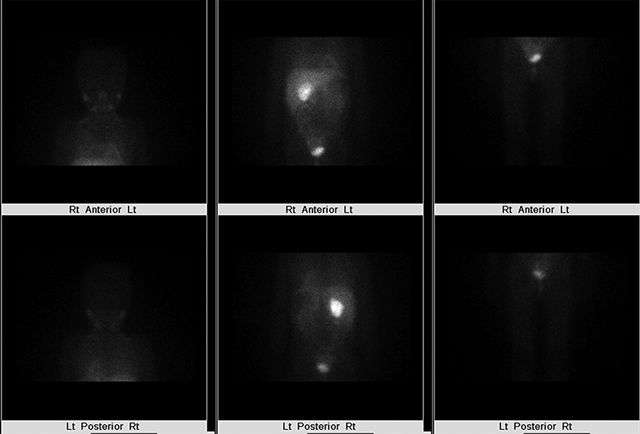 28    Where is the organ of Zuckerkandl?

A.  Near the carotid bifurcation

B.  Near the aortic bifurcation

C.  Within the middle ear

D.  Along the urinary bladder wall

29    Pheochromocytoma is associated with several tumor-forming genetic syndromes. Which of the following is an example of that?

30    A 75-year-old male with altered mental status undergoes an abdominopelvic CT examination that demonstrates an abnormal left adrenal gland. The right adrenal gland is normal. Which of the following best explains this imaging finding? 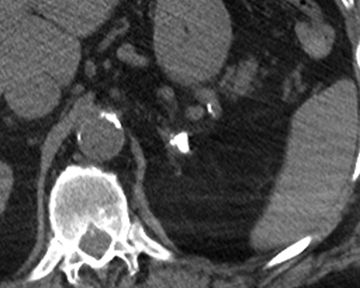 1    Answer D. Large, bulky, bilateral macroscopic fat-containing adrenal masses is indicative of adrenal myelolipomas in the setting of congenital adrenal hyperplasia (CAH). These patients require medical management for their endocrine abnormalities. The most common cause of CAH is 21-hydroxylase deficiency, which results in salt wasting, female virilization, and hyperandrogenism. Most patients with 21-hydroxylase deficiency are detected during newborn screening. Adrenal protocol CT is not indicated for adrenal masses that contain macroscopic fat because it will add no additional information. PET and/or operative referral are not indicated because the masses are not malignant.