E.  The pictured drug is contraindicated for the treatment of anaphylactic shock.

2    What is the principal effect of gadolinium-based contrast media on T1?

3    A 42-year-old female complains of increasing injection site pain 2 hours following the attempted administration of 125 mL of nonionic low-osmolality iodinated contrast material through a peripheral intravenous catheter in the antecubital fossa. The injection was halted after 100 mL was injected. Which factor most strongly indicates that a surgical consultation may be necessary? 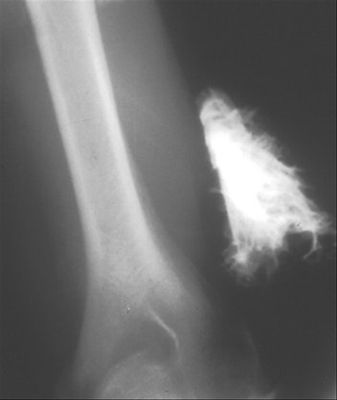 A.  The patient’s symptoms (increasing pain)

4    A 68-year-old male with prostate cancer and an estimated glomerular filtration rate (eGFR) of 31 mL/min/1.73 m2 presents for magnetic resonance imaging (MRI) of the pelvis. The patient is concerned about nephrogenic systemic fibrosis (NSF). Among the following contrast media, which has been associated with the least number of unconfounded cases of NSF?

5    What is the most important factor used to discriminate vasovagal reaction from anaphylactic shock?

6    A 55-year-old male with hypertension complains of light-headedness and nausea 1 minute following the intravenous administration of 120 mL of nonionic low-osmolality iodinated contrast material. While the patient’s vital signs (shown below) are being measured, he loses consciousness. Despite laying the patient supine, raising his legs, and administering an intravenous fluid bolus, he remains unconscious with a palpable pulse at an unchanged rate. What is the best next step? 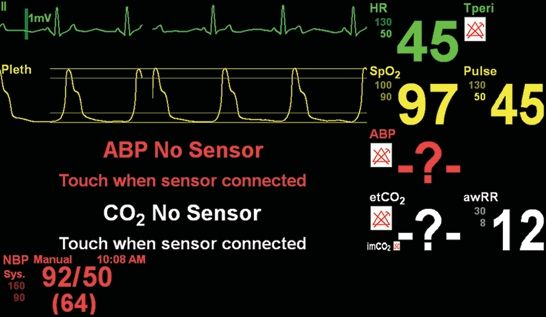 7    A 62-year-old male with severe hypertension, peripheral vascular disease, and stage IIIb chronic kidney disease (eGFR is 35 mL/min/1.73 m2) presents for a CT angiogram of the renal arteries. What is the most effective way to improve or maintain vascular attenuation while simultaneously reducing the iodinated contrast material dose?

A.  Proceed with the test. No special precautions are needed.

B.  Reschedule the test, and tell the patient to hold his metformin 24 hours prior.

C.  Proceed with the test, and tell the patient to hold his metformin afterward.

D.  Reschedule the test and discuss holding the amiodarone with the patient’s cardiologist.

E.  Proceed with the test, and tell the patient to hold his amiodarone afterward.

9    A 51-year-old female imaged with contrast-enhanced CT for evaluation of right lower quadrant pain develops an estimated 125 mL extravasation into her right forearm. What is the approximate likelihood that she will develop a compartment syndrome?

11    Which imaging finding is most suggestive of malignancy within a 5-mm short-axis perirectal lymph node before and after intravenous ultrasmall superparamagnetic iron oxide particle (USPIO) administration on T2*-weighted imaging?

B.  Homogeneously hyperintense to muscle after USPIO administration

14    Which of the following contrast media is considered to be iso-osmolar?

15    A 38-year-old female with stage III cervical cancer and a prior allergic-like reaction to iodinated contrast material (reaction: bronchospasm) presents for a contrast-enhanced CT of the chest, abdomen, and pelvis. She has not been premedicated with corticosteroids. What is the shortest length of time of oral corticosteroid premedication that has been shown to be efficacious in the prevention of a future contrast reaction?

16    A 24-year-old female in her third trimester of pregnancy presents to an urgent care clinic with right lower quadrant pain. Pelvic ultrasound is negative, and an abdominal/pelvic MRI is not possible. A contrast-enhanced CT of the abdomen and pelvis is performed without oral contrast material following the intravenous administration of 100 mL of nonionic low-osmolality iodinated contrast material. What is the predicted effect of this contrast material bolus on neonatal thyroid function?

A.  90% chance of neonatal hypothyroidism

B.  50% chance of neonatal hypothyroidism

17    Some patients with chronic kidney disease are at risk of developing nephrogenic systemic fibrosis following the intravascular administration of gadolinium-based contrast media. What estimated glomerular filtration rate range is cited by the U.S. Food and Drug Administration as contraindicated for the highest-risk agents?

18    A 51-year-old female was imaged with contrast-enhanced CT for evaluation of right lower quadrant pain. One hundred and twenty-five milliliters of nonionic low-osmolality iodinated contrast material was administered intravenously. An incidental abnormality was detected in the right kidney. What is the best next step? 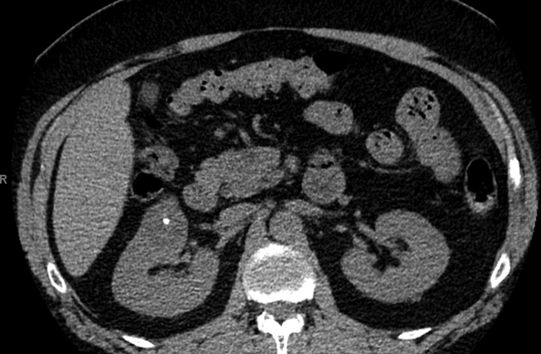 A.  Perform a physical examination.

19    A 32-year-old lactating female with normal renal function who is 4 weeks postpartum presents with pleuritic chest pain. A contrast-enhanced CT pulmonary angiogram is performed with 100 mL of nonionic low-osmolality iodinated contrast material. The patient would like to know what to do regarding breast-feeding her infant after the test. What is the most appropriate advice?

A.  The risk to the infant is small but has been confirmed in small series. The mother should be advised to pump and discard her milk for 3 days.

B.  The risk to the infant is small but has been confirmed in small series. The mother should be advised to pump and discard her milk for 1 day.

C.  The risk to the infant is likely negligible or nonexistent, but the mother may choose to pump and discard her milk for 3 days if she chooses.

D.  The risk to the infant is likely negligible or nonexistent, but the mother may choose to pump and discard her milk for 1 day if she chooses.

20    A 22-year-old male was involved in a serious motor vehicle collision. A contrast-enhanced portal venous phase CT of the abdomen and pelvis performed 6 hours ago at an outside hospital confirmed hepatic, splenic, and renal lacerations. The clinical service would like to evaluate for ureteric injury and asks if another contrast material bolus is required. What is the approximate half-life of most intravenously administered nonionic low-osmolality iodinated contrast media in patients with normal renal function?

21    An 82-year-old female with hypertension, peripheral vascular disease, a 2 pack-per-day smoking habit, and bilateral calf claudication presents for a CT angiogram with runoff to the lower extremities. Preprocedural estimated glomerular filtration rate is 28 mL/min/1.73 m2. Six months ago, it was 27 mL/min/1.73 m2. Which of the following measures has most consistently been shown to mitigate the risk of contrast-induced nephrotoxicity?

A.  600 mg N-acetylcysteine PO every 12 hours twice before and twice after the scan

C.  1,200 mg N-acetylcysteine PO every 12 hours twice before and twice after the scan

22    A 66-year-old male with a left subclavian pacemaker is being evaluated for possible spinal cord compression. A STAT myelogram CT is requested. Due to the urgency of the request, the myelogram will be performed in the gastrointestinal radiology suite. What is the most important thing to ensure with respect to the administered contrast material before proceeding with the test?

A.  Only nonionic iodinated contrast media should be used.

B.  Only iodinated contrast media with an osmolality of approximately 300 mOsm/kg should be used.

C.  Only iodinated contrast media warmed to human body temperature should be used.

D.  Only iodinated contrast media with meglumine salts should be used.

23    A 33-year-old female with a recent diagnosis of Graves disease and normal renal function presents for an I-131 therapy session 1 week after a contrast-enhanced CT of the chest was performed. Eighty milliliters of nonionic low-osmolality iodinated contrast material was administered. For how long should the practitioner wait before administering the I-131 treatment dose to be certain that the nonradioactive iodine from the contrast material bolus has first cleared from the patient’s thyroid gland?

A.  No additional waiting is necessary (total waiting time: 1 week).

24    A 50-year-old male with multiple food and drug allergies and a history of hypertension exhibits diffuse erythema and altered mental status following the intra-arterial administration of approximately 50 mL of iso-osmolality iodinated contrast material. Vital signs were obtained (shown below) while the patient was receiving supplemental oxygen (4 L by nasal cannula) and following a 1 L 0.9% NaCl intravenous fluid bolus. 1:1,000 epinephrine is available. What is the ideal site for injection? 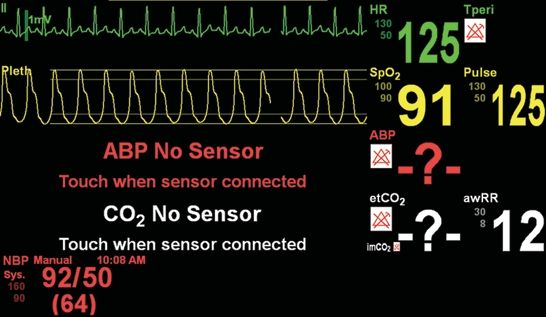 E.  Epinephrine is not indicated.

25    A 60-year-old male with left lower quadrant pain and two prior allergic-like reactions to nonionic low-osmolality iodinated contrast material (both prior reactions: hives) presents for a contrast-enhanced CT of the abdomen and pelvis. He has received a standard oral corticosteroid regimen and states that all doses were taken as scheduled. The patient reports that following his last contrast-enhanced CT, he experienced hives despite receiving the same regimen. What is the likelihood that this patient will experience a severe contrast reaction following this contrast-enhanced study?

26    A 39-year-old female with Raynaud syndrome and systemic lupus erythematosus presents with 2 months of progressive digital claudication in her right hand. Digital subtraction angiography with provocative testing is planned. Which of the following contrast media would be predicted to cause the least amount of discomfort during this procedure?

27    What contrast material is depicted by the following chemical structure? 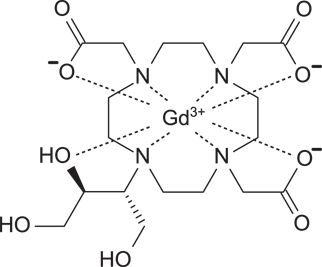 28    A 30-year-old male with multiple endocrine neoplasia (MEN) type 2b and early-onset hypertension presents for an adrenal protocol CT of the abdomen. The patient had a prophylactic thyroidectomy many years ago and has no allergies or other medical conditions. Based on this information, what is the risk of administering 125 mL of nonionic low-osmolality iodinated contrast material to this patient?

A.  No increased risk above the general population

29    A 28-year-old female with seasonal allergies and asthma complains of throat tightness and hoarseness following the intravenous administration of 125 mL of iodinated contrast material. She is producing an audible high-pitched noise during inspiration. Which of the following is the optimal dose of 1:1,000 epinephrine?

E.  Epinephrine is not indicated.

30    A 75-year-old male with peripheral vascular disease and hypertension presents with acute anemia and hematochezia. His estimated glomerular filtration rate is 25 mL/min/1.73 m2. A tagged red blood cell scan was conducted (shown below). If angiography is performed, which of the following contrast media contributes the least nephrotoxic risk? 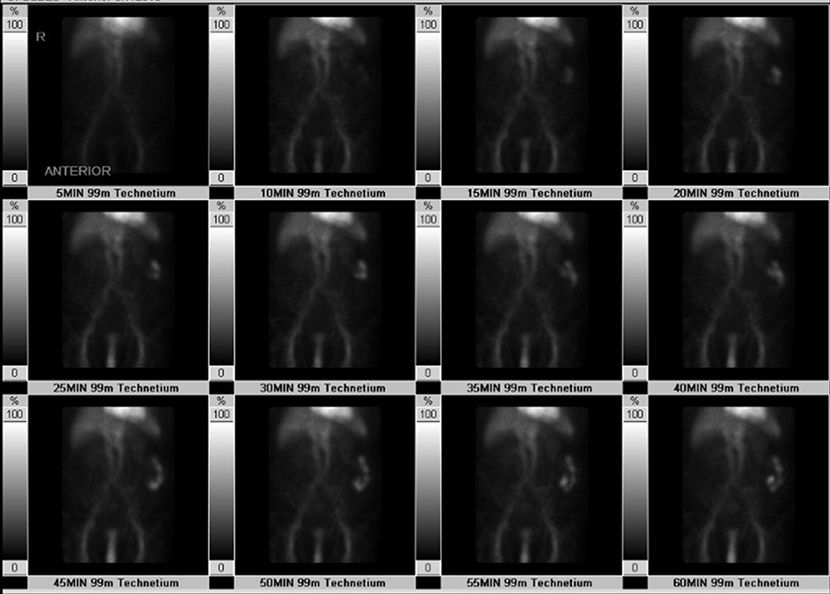