Cancer cell death is achieved in cryotherapy via several pathways. In the coldest areas of the iceball, nearest the probe, ultralow temperatures create direct cell destruction via intra- and extracellular ice crystal formation which disrupts the cell membrane, dehydrates the cell, and leaves a hyperosmotic remnant. This results in tissue necrosis. Secondly, neighboring cells are exposed to thermal injury which induces inflammation and programmed cell death via apoptosis. Lastly, the cryotherapy effect also disrupts surrounding blood vessels, therefore restricting blood flow to the treated tissues. To achieve cell death, a tissue temperature of −40 °C must be reached, although this is reduced to −20 °C if two freeze-thaw cycles are used. By rapidly cycling between freezing and thawing, which the newer argon probes allow, cells are unable to adapt, and this enhances the effect. It is generally regarded that two freeze-thaw cycles are necessary to achieve effective treatment [12].

Patient preparation for cryotherapy includes preoperative evaluation of medical comorbidities with anesthesia clearance. Patient preparation includes nothing by mouth after midnight the night before surgery, with perioperative antibiotics given within 1 h prior to surgery with either a cephalosporin or quinolone.
Surgery is performed under a general or spinal anesthetic in the exaggerated lithotomy position, with initial placement of a suprapubic tube for postoperative bladder decompression. A urethral catheter is then introduced via the urethra and into the bladder, and a brachytherapy template is attached to the table with a transrectal ultrasound allowing for real-time guidance and monitoring of the iceball during the procedure. A rectal and/or Denonvilliers fascia temperature probe is then deployed transperineally to allow real-time temperature monitoring during the procedure. At this point, prostate measurements are taken, and a treatment plan is devised. Cryoprobes are then deployed according to the plan with appropriate length settings. Care should be taken in keeping cryoprobes at least 8 mm from the urethra. Cryoprobe placement can be made for whole-gland treatment, hemiablation, and focal treatment. Cystoscopy to identify any misplaced probes is performed, and while the scope is in the bladder, a guidewire is placed. The scope is removed and a urethral warmer placed over the wire and secured in place to the drapes.
With the probes in place, rapid freezing is begun; with a target temperature of −40 °C. Rapid freezing increases the toxicity within the iceball while limiting the damage beyond it. Adjustments are made to the cooling of the probes to make a uniform iceball, and the blacked-out area on the transrectal ultrasound corresponds to its location (Fig. 13.2). On whole-gland treatment, a margin of 2–4 mm is obtained on the gland with the iceball abutting but not reaching the rectal wall with temperature measurements of the rectum confirming that it is not being frozen. Once the target temperature has been reached and a uniform iceball has reached beyond the margins, active thawing is started to stop the progression of the iceball. After an initial active thaw, passive thawing can be used with a goal of reaching >0 °C, at which time the prostate should become visible again on ultrasound, and a second freeze-thaw cycle is begun. With the completion of the second thaw, the probes are then removed, the urethral warmer and temperature probe is removed, and the suprapubic tube or Foley catheter is placed to gravity drainage. The patient is then awaken from the procedure and taken to the postanesthesia recovery suite, with a discharge home in 1–2 h after the procedure. 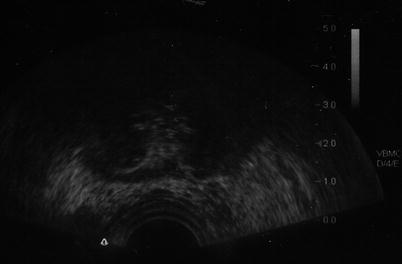 Blacked-out area on ultrasound corresponds to location of the iceball
Follow-up after the procedure includes suprapubic tube or Foley catheter removal at 1 week. Postoperative follow-up involves history and physical examination with PSA levels being drawn every 3 months for a year, every 6 months for the next 2 years, and annually thereafter. Some controversy exists as to how to monitor for prostate cancer recurrence after treatment. While some authors advocate for routine posttreatment biopsy at 12–18 months, many authors use the ASTRO 1997 criteria (three consecutive PSA rises) or the newer ASTRO Phoenix criteria (PSA nadir + 2 ng/ml) [13, 14].
Using this endpoint is somewhat controversial due to these criteria being validated only in patients treated with radiation and not cryotherapy. Levy and colleagues, using the Cryo On-Line Database (COLD) Registry, found that a nadir PSA was associated with recurrence outcomes. Eighty-five percent of patients achieved a nadir <0.6 ng/ml, 7 % had a nadir from 0.6 to 1.0 ng/ml, 6 % had a nadir of 1.1 to 2.5 ng/ml, and 2 % >2.5 ng/ml. The patients with a nadir <0.6 ng/ml had 5-year disease-free survival of 86, 67, and 51 % for low-, intermediate-, and high-risk disease, respectively. Patients with nadir of 0.6 ng/ml or higher had a 70 % disease-free rate at 2 years across risk groupings, leading the authors to conclude that patients with a nadir of 0.6 ng/ml or higher require closer follow-up and likely need repeat biopsy [15].
These authors subsequently showed that PSA <0.4 ng/ml was even more likely to assure 5-year biochemical disease-free survival so is the goal of contemporary whole-gland primary cryoablation [16].

As with any form of prostate cancer treatment, a number of complications can occur after prostate cryotherapy. The most common complication following prostate cryotherapy is erectile dysfunction. In whole-gland treatment, anywhere from 40 to 90 % of patients undergoing treatment report erectile dysfunction [14, 17, 18].
High rates of ED are anticipated with this approach given the proximity of the cavernous nerve to the prostate and the need to get a 2–4 mm iceball margin to achieve cancer control. Partial ablation techniques including subtotal ablation (where the contralateral nerve is spared), hemiablation, and focal ablation have much better potency rates of 71–85 %, but these are limited to low-risk patients with proven unilateral disease [19–23].
In general, whole-gland treatment should not be performed in men interested in preserving potency, and partial ablation should be limited to potent patients who meet stringent criteria for low-risk, unifocal disease. These cases should continue to be considered investigational [24].
Urinary complications are comparable to other radical treatment techniques such as surgery or radiotherapy. Urinary retention tends to be transient and associated with postoperative prostatic edema. Urinary incontinence is also comparable to other radical treatments with a less than 10 % incontinence rate observed. Data calculated from the COLD Registry shows a roughly 5 % pad use rate in whole-gland treatments [14], while partial ablation has even lower rates [23].
Urethral sloughing does occur in up to 15 % of patients with salvage treatment but is rare with primary treatment, but supportive therapy with brief urinary drainage with a suprapubic tube or Foley catheter is often sufficient to manage this complication. Rarely, a transurethral resection of the prostate is necessary, and subsequent urethral fistula is even more uncommon due to the effectiveness of current urethral warming devices [9, 14].
Pain occurs in upward of 50 % of treated patients, but this is usually transient [8, 9, 14, 25]. More severe pain syndromes include osteitis pubis, which occurs in about 3 % of patients, and penile pain in about 3 % of patients. These tend to be transient in nature and resolve with nonsteroidal anti-inflammatory medications [11, 26].
The most dreaded complication of prostate cryotherapy remains rectourethral fistula formation, and it is relatively uncommon with current cryotherapy devices. Jones and colleagues published the results of 1198 patients undergoing primary cryotherapy in the COLD Registry, and the rate of rectourethral fistula complication was 0.4 % [14].
Use of real-time temperature probes and real-time ultrasound monitoring has reduced this to a relatively rare phenomenon. This complication typically presents with watery diarrhea and fecaluria, and initial management is with Foley catheter drainage and a low-residue diet. In the rare cases that this fails to allow complete healing, definitive repair should be delayed for a minimum of 3–6 months allowing for healing from the initial procedure. In patients who have undergone prior radiation, repair is typically not possible, and permanent fecal and/or urinary diversion is usually necessary. Table 13.1 is a comparison of postprocedure continence, potency, and rectourethral fistula in an updated query of the COLD registry (Jones, unpublished data).

Comparison of continence, potency, and rectourethral fistula from the COLD database (through 4099 cases)


Jones, unpublished data
Robinson and colleagues published their quality-of-life results comparing patients randomized to treatment with prostate cryotherapy to another radical treatment, external beam radiation therapy. Two hundred and forty-four patients were randomized to one of those two treatments, with follow-up to 3 years posttreatment. Patients in both groups had overall high levels of quality of life, with cryotherapy patients having a slightly higher rate of acute urinary dysfunction, which resolved over time. At 3 months, both treatments had significantly reduced sexual quality of life, with the cryotherapy arm being statistically inferior in mean sexual function score at 3 years, with 13 % of cryotherapy patients reporting that sexual function was a moderate to severe problem [27].

There are several tricks to making one’s initial experience with prostate cryotherapy more straightforward. First of all, patient selection is important. Large glands (>60 g on transrectal ultrasound) should be avoided except in the most experienced hands. Larger glands require more cryoprobes to completely treat the gland and are harder to monitor on ultrasound. Areas that may harbor viable prostate cancer cells include the zones of tissue between probes and at the periphery of cryoprobe treatment zones, which are more likely to be found in larger glands [28].
Only gold members can continue reading. Log In or Register to continue