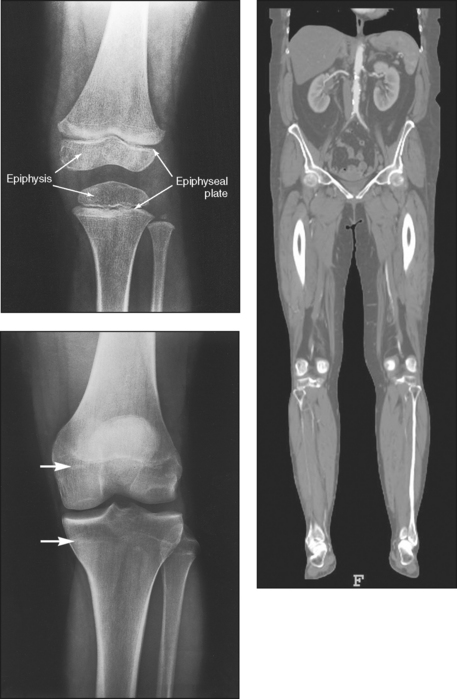 Radiographers also must have a general understanding of all body systems and their functions. Particular attention must be given to gaining a thorough understanding of the skeletal system and the surface landmarks used to locate different body parts. The radiographer must be able to visualize mentally the internal structures that are to be radiographed. By using external landmarks, the radiographer should properly position body parts to obtain the best diagnostic radiographs possible.

The full dimension of the human body as viewed in the anatomic position (see Chapter 1) can be effectively subdivided through the use of imaginary body planes. These planes slice through the body at designated levels from all directions. The following four fundamental body planes referred to regularly in radiography are illustrated in Fig. 3-1, A: 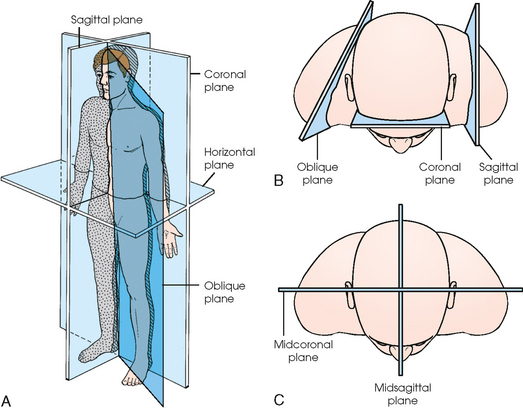 Fig. 3-1 Planes of the body. A, A patient in anatomic position with four planes identified. B, Top-down perspective of patient’s body showing sagittal plane through left shoulder, coronal plane through anterior head, and oblique plane through right shoulder. C, Midsagittal plane dividing body equally into right and left halves and midcoronal plane dividing body equally into anterior and posterior halves. Sagittal, coronal, and horizontal planes are always at right angles to one another.

A horizontal plane passes crosswise through the body or a body part at right angles to the longitudinal axis. It is positioned at a right angle to the sagittal and coronal planes. This plane divides the body into superior and inferior portions. Often it is referred to as a transverse, axial, or cross-sectional plane (see Fig. 3-1, A).

An oblique plane can pass through a body part at any angle among the three previously described planes (see Fig. 3-1, A and B). Planes are used in radiographic positioning to center a body part to the image receptor (IR) or central ray and to ensure that the body part is properly oriented and aligned with the IR. The midsagittal plane may be centered and perpendicular to the IR with the long axis of the IR parallel to the same plane. Planes can also be used to guide projections of the central ray. The central ray for an anteroposterior (AP) projection passes through the body part parallel to the sagittal plane and perpendicular to the coronal plane. Quality imaging requires attention to all relationships among body planes, the IR, and the central ray.

Body planes are used in computed tomography (CT), magnetic resonance imaging (MRI), and ultrasound (US) to identify the orientation of anatomic cuts or slices shown in the procedure (Fig. 3-2). Imaging in several planes is often used to show large sections of anatomy (Fig. 3-3). 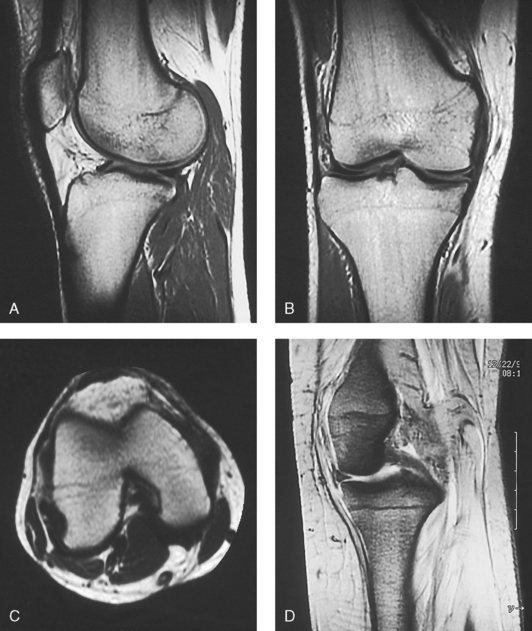 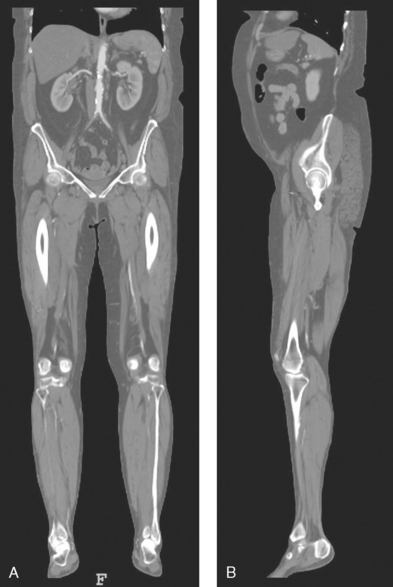 Two special planes are used in radiographic positioning. These planes are localized to a specific area of the body only.

The interiliac plane transects the pelvis at the top of the iliac crests at the level of the fourth lumbar spinous process (Fig. 3-4, A). It is used in positioning the lumbar spine, sacrum, and coccyx. 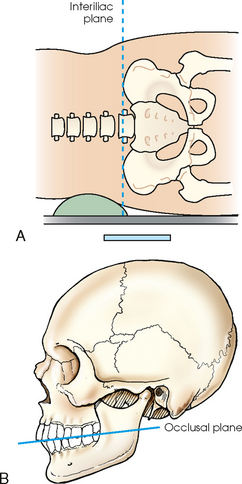 The occlusal plane is formed by the biting surfaces of the upper and lower teeth with the jaws closed (Fig. 3-4, B). It is used in positioning of the odontoid process and some head projections. 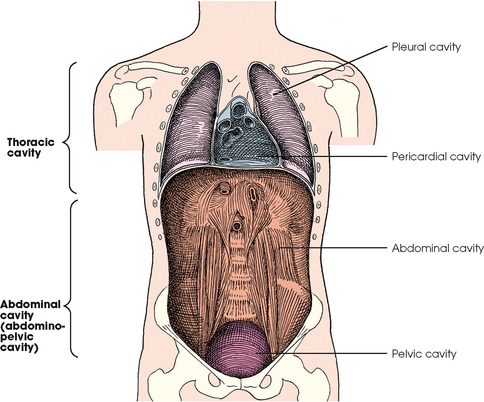 • Pelvic portion—rectum, urinary bladder, and parts of the reproductive system

DIVISIONS OF THE ABDOMEN

The abdomen is the portion of the trunk that is bordered superiorly by the diaphragm and inferiorly by the superior pelvic aperture (pelvic inlet). The location of organs or an anatomic area can be described by dividing the abdomen according to one of two methods: four quadrants or nine regions.

The abdomen is often divided into four clinical divisions called quadrants (Fig. 3-6). The midsagittal plane and a horizontal plane intersect at the umbilicus and create the boundaries. The quadrants are named as follows: 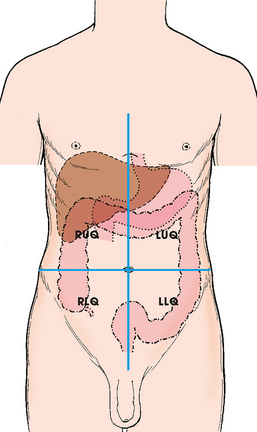 Dividing the abdomen into four quadrants is useful for describing the location of the various abdominal organs. For example, the spleen can be described as being located in the left upper quadrant.

Some anatomists divide the abdomen into nine regions by using four planes (Fig. 3-7). These anatomic divisions are not used as often as quadrants in clinical practice. The nine regions of the body, divided into three groups, are named as follows: 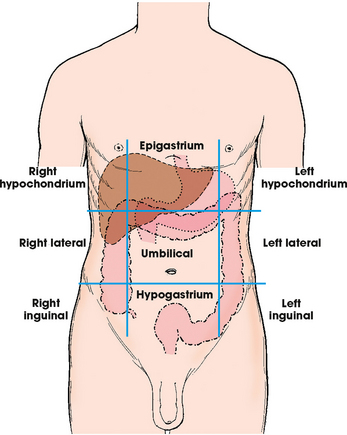 Many commonly used landmarks are listed in Table 3-1 and diagrammed in Fig. 3-8. These landmarks are accepted averages for most patients and should be used only as guidelines. Variations in anatomic build or pathologic conditions may warrant positioning compensation on an individual basis. The ability to compensate is gained through experience.

External landmarks related to body structures at the same level 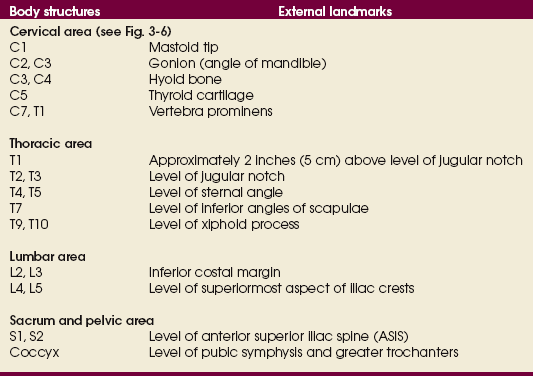 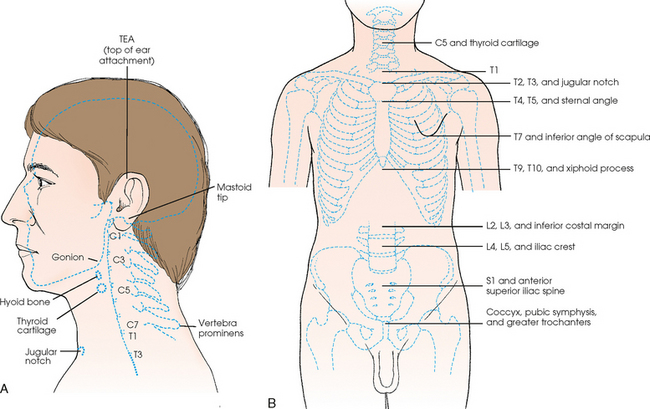 Common variations in the shape of the human body are termed the body habitus. 1 determined the primary classifications of body habitus based on his study of 1000 patients. The specific type of body habitus is important in radiography because it determines the size, shape, and position of the organs of the thoracic and abdominal cavities.

Body habitus directly affects the location of the following:

An organ such as the gallbladder may vary in position by 8 inches, depending on the body habitus. The stomach may be positioned horizontally, high, and in the center of the abdomen for one type of habitus and positioned vertically, low, and to the side of the midline in another type. Fig. 3-9 shows an example of the placement, shape, and size of the lungs, heart, and diaphragm in patients with four different body habitus types.

Body habitus and the placement of the thoracic and abdominal organs are also important in the determination of technical and exposure factors for the appropriate radiographic density and contrast and the radiation doses. Contrast medium in the gallbladder may affect the automatic exposure control detector. For one type of habitus, the gallbladder may lie directly over the detector (which is undesirable); for another, it may not even be near the detector. The standard placement and size of the IR may have to be changed because of body habitus. The selection of kilovolt (peak) and milliampere-second exposure factors may also be affected by the type of habitus because of wide variations in physical tissue density. These technical considerations are described in greater detail in radiography physics and imaging texts.

Heart: Nearly vertical and at midline

Lungs: Long, apices above clavicles, may be broader above base

Stomach: Low and medial, in the pelvis when standing

Colon: Low, folds on itself

Gallbladder: Low and nearer the midline

Organs and characteristics for this habitus are intermediate between sthenic and asthenic body habitus types; this habitus is the most difficult to classify 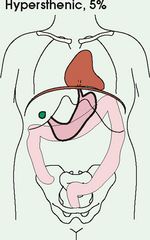 Lungs: Short, apices at or near clavicles

Stomach: High, transverse, and in the middle

Colon: Around periphery of abdomen

More than 85% of the population has either a sthenic or hyposthenic body habitus. The sthenic type is considered the dominant type of habitus. The relative shape of patients with a sthenic or hyposthenic body habitus and the position of their organs are referred to in clinical practice as ordinary or average. All standard radiographic positioning and exposure techniques are based on these two groups. Radiographers must become thoroughly familiar with the characteristics and organ placements of these two body types.

Radiographers must also become familiar with the two extreme habitus types: asthenic and hypersthenic. In these two small groups (15% of the population), the placement and size of the organs significantly affect positioning and the selection of exposure factors. Consequently, radiography of these patients can be challenging. Experience and professional judgment enable the radiographer to determine the correct body habitus and to judge the specific location of the organs.

Body habitus is not an indication of disease or other abnormality, and it is not determined by the body fat or physical condition of the patient. Habitus is simply a classification of the four general shapes of the trunk of the human body. When positioning patients, the radiographer should be conscious that habitus is not associated with height or weight. Four patients of equal height could have four different trunk shapes (Fig. 3-10). 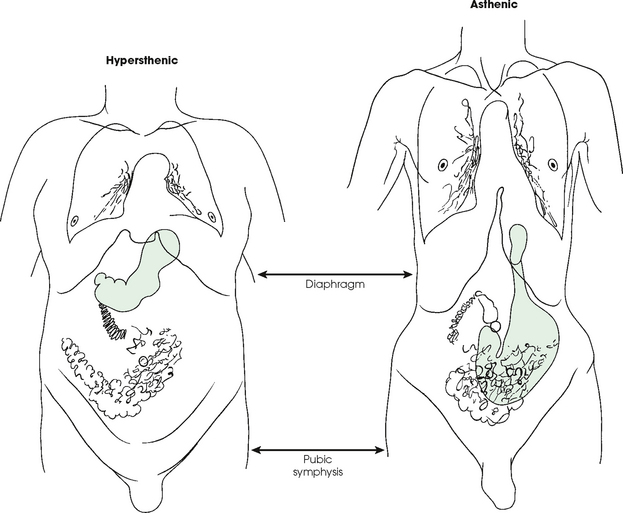 The adult human skeleton is composed of 206 primary bones. Ligaments unite the bones of the skeleton. Bones provide the following:

• A frame to support the body

• Storage for calcium, phosphorus, and other salts

The 206 bones of the body are divided into two main groups:

The axial skeleton supports and protects the head and trunk with 80 bones (Table 3-2). The appendicular skeleton allows the body to move in various positions and from place to place with its 126 bones (Table 3-3). Fig. 3-11 identifies these two skeletal areas. 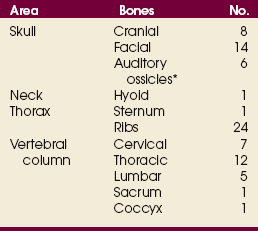 *Auditory ossicles are small bones in the ears. They are not considered ofofficial bones of the axial skeleton but are placed here for convenience. 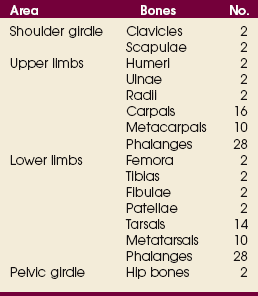 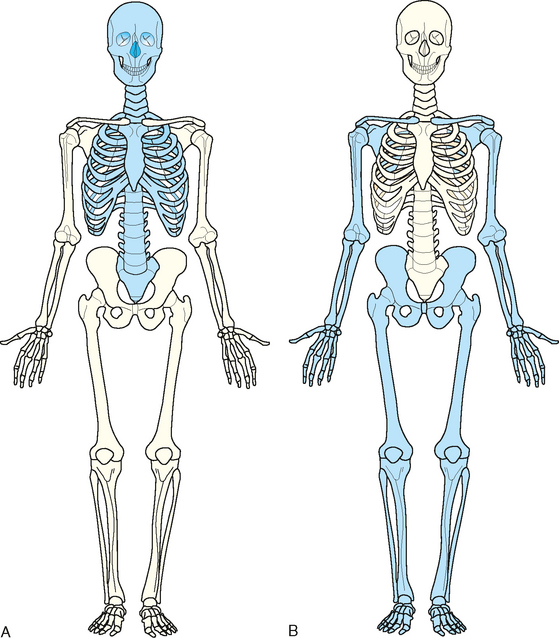 The general features of most bones are shown in Fig. 3-12. All bones are composed of a strong, dense outer layer called the compact bone and an inner portion of less dense spongy bone. The hard outer compact bone protects the bone and gives it strength for supporting the body. The softer spongy bone contains a spiculated network of interconnecting spaces called the trabeculae (Fig. 3-13). The trabeculae are filled with red and yellow marrow. Red marrow produces red and white blood cells, and yellow marrow stores adipose (fat) cells. Long bones have a central cavity called the medullary cavity, which contains trabeculae filled with yellow marrow. In long bones, the red marrow is concentrated at the ends of the bone and not in the medullary cavity. 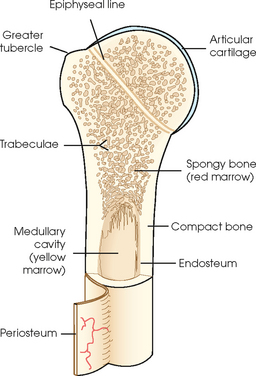 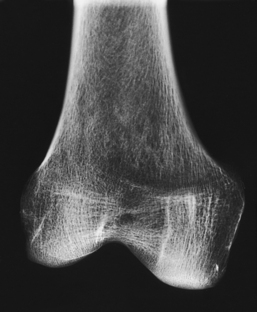 Bones are live organs and must receive a blood supply for nourishment or they die. Bones also contain a supply of nerves. Blood vessels and nerves enter and exit the bone at the same point, through openings called the foramina. Near the center of all long bones is an opening in the periosteum called the nutrient foramen. The nutrient artery of the bone passes into this opening and supplies the cancellous bone and marrow. The epiphyseal artery separately enters the ends of long bones to supply the area, and periosteal arteries enter at numerous points to supply the compact bone. Veins exiting the bones carry blood cells to the body (Fig. 3-14). 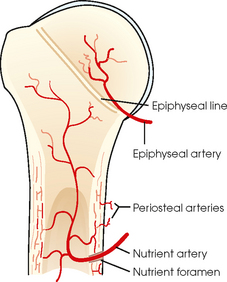 Ossification is the term given to the development and formation of bones. Bones begin to develop in the 2nd month of embryonic life. Ossification occurs separately by two distinct processes: intermembranous ossification and endochondral ossification.

Bones that develop from fibrous membranes in the embryo produce the flat bones—bones of the skull, clavicles, mandible, and sternum. Before birth, these bones are not joined. As flat bones grow after birth, they join and form sutures. Other bones in this category merge and create the various joints of the skeleton.

Primary ossification begins before birth and forms the entire bulk of the short and irregular bones. This process forms the long central shaft in long bones. During development only, the long shaft of the bone is called the diaphysis (Fig. 3-15, A). 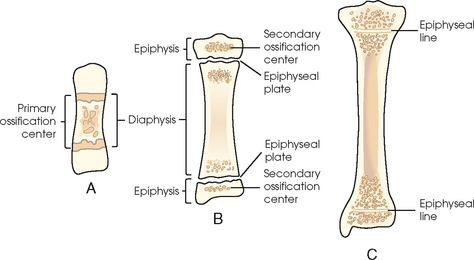 Secondary ossification occurs after birth when a separate bone begins to develop at both ends of each long bone. Each end is called the epiphysis (Fig. 3-15, B). At first, the diaphysis and epiphysis are distinctly separate. As growth occurs, a plate of cartilage called the epiphyseal plate develops between the two areas (Fig. 3-15, C). This plate is seen on long bone radiographs of all pediatric patients (Fig. 3-16, A). The epiphyseal plate is important radiographically because it is a common site of fractures in pediatric patients. Near age 21 years, full ossification occurs, and the two areas become completely joined; only a moderately visible epiphyseal line appears on the bone (Fig. 3-16, B).

Fig. 3-16 A, Radiograph of a 6-year-old child. Epiphysis and epiphyseal plate shown on knee radiograph (arrows). B, Radiograph of same area in a 21-year-old adult. Full ossification has occurred, and only subtle epiphyseal lines are seen (arrows). C, PA radiograph of hand of a 2½-year-old child. Note early stages of ossification in epiphyses at proximal ends of phalanges and first metacarpal, distal ends of other metacarpals, and radius. (C, From Standring S: Gray’s anatomy, ed 40, New York, 2009, Churchill Livingstone.) Churchill Livingstone