• The olfactory epithelium has multiple cellular components, including the following:

• Olfactory cells send bundles of unmyelinated axons (olfactory nerves proper) across the cribriform plate of the ethmoid bone to synapse on the second-order neurons in the olfactory bulb (Fig. 1.2).

• The olfactory tract includes the axons of mitral and tufted cells and travels posteriorly in the olfactory sulcus between the gyrus rectus medially and the orbitofrontal gyrus laterally. It splits into lateral, medial, and intermediate olfactory striae at the anterior perforated substance. 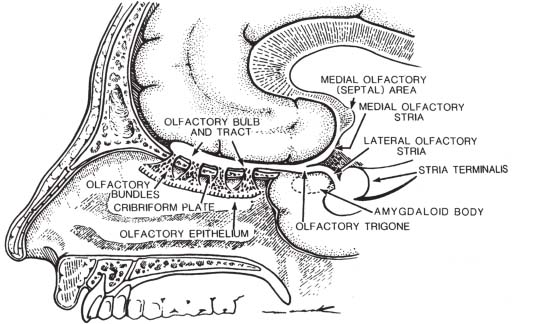 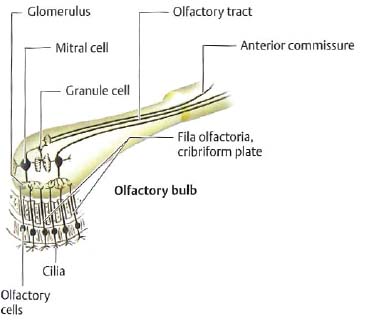 • The olfactory trigone (Fig. 1.3) is the triangle formed by the lateral and medial striae.

• Lateral olfactory stria projects to the

• Fibers then travel from the piriform cortex (primary olfactory cortex) to the following:

Entorhinal cortex (Fig. 1.3) (secondary olfactory cortex) to the hippocampus, insula, and frontal lobe by way of the uncinate fasciculus.

Amygdala, lateral preoptic hypothalamus, and the nucleus of the diagonal band.

• Efferent fibers from the olfactory areas travel in

• The medial forebrain bundle (MFB) from all three olfactory areas to the hypothalamus and brainstem reticular formation.

The stria medullaris thalami from the olfactory areas to the habenular nucleus (epithalamus).

• The stria terminalis from the amygdala to the anterior hypothalamus and preoptic area. The hypothalamus sends the olfactory information to the reticular formation, superior and inferior salivatory nuclei (for salivation in response to odors), and dorsal motor nucleus of X (to cause acceleration of peristalsis and increased gastric secretion). 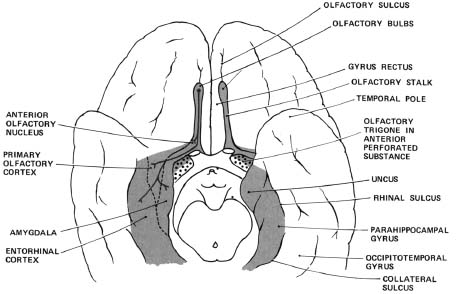 • Loss of smell (anosmia) can be produced by a lesion anywhere along the olfactory pathway, from the olfactory epithelium, olfactory bulb, olfactory tracts, and/or central structures (posterior orbitofrontal, subcallosal, anterior temporal, or insular cortex).