A comprehensive review of the physics used in ultrasonography is beyond the scope of this text. Despite this, some understanding of the basic physics used in ultrasound is needed for optimal creation and interpretation of an ultrasound image. Ultrasound images are created by reflected sound waves returning back to the transducer. The nature of the image is based on the properties of different tissues in the body. There are a number of factors that influence this process.

Frequency of the sound wave is measured in cycles per second or Hertz (Hz).

By definition, sound waves greater than 20,000 Hz are in the ultrasonic range. They are considered ultrasonic because they are outside of the normal human range of hearing, which is 20 to 20,000 Hz. The frequency used in medical ultrasound imaging is generally 2 to 15 megahertz (MHz). The range for most superficial musculoskeletal applications is at the higher end of this, generally 8 to 15 MHz. 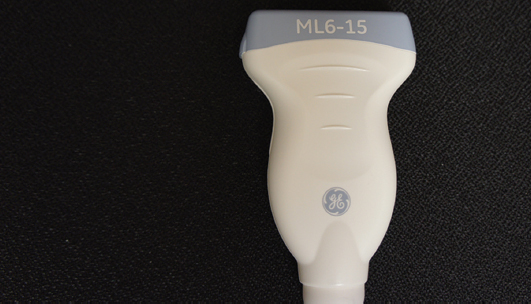 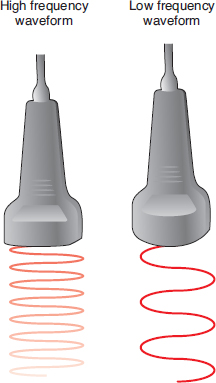 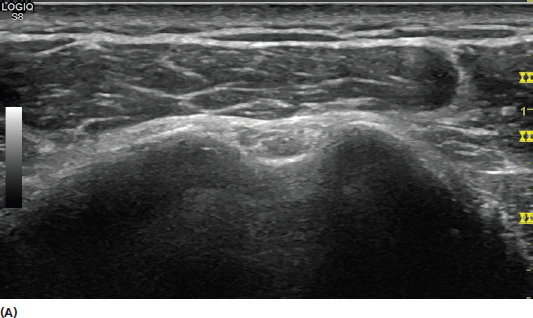 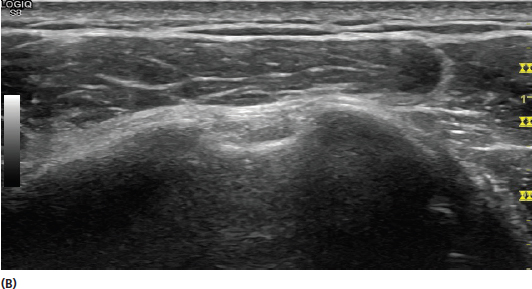 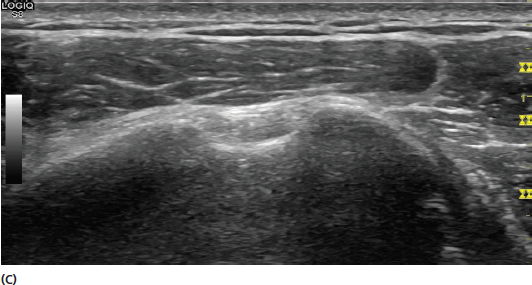 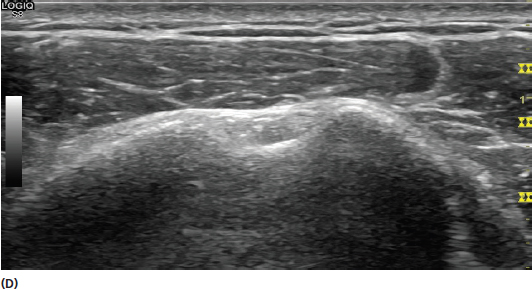 FIGURE 2.3 Sonograms demonstrating the effect of incident sound wave frequency changes on the appearance of the image. The frequencies shown are at (A) 15 MHz, (B) 12 MHz, (C) 9 MHz, and (D) 8 MHz. Although the differences might appear relatively minimal, there is a better resolution of the superficial structures at the higher frequencies and better penetration of the sound waves at the lower frequencies.

Reflection in ultrasound refers to the return of the sound wave energy back to the transducer. This principle is what allows the image to be generated by the ultrasound machine. Generally, more reflection results in a more hyperechoic (brighter) image. Reflection occurs at tissue boundaries where the tissues on either side of the boundaries have differences in acoustic impedance (Figure 2.5). Larger differences in these acoustic impendences, therefore, result in more reflection. The reflection can be considered either specular or diffuse. Specular reflection occurs when the sound waves encounter large smooth surfaces such as bone, which results in the sound waves being reflected back in a relatively uniform direction. The cells of most soft tissue create a more diffuse pattern of reflection to the transducer (Figure 2.6). 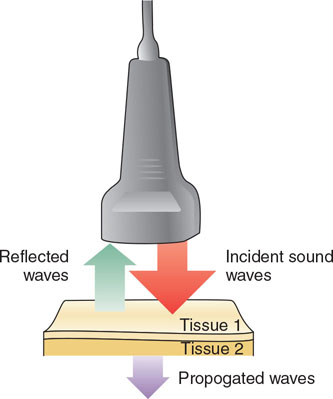 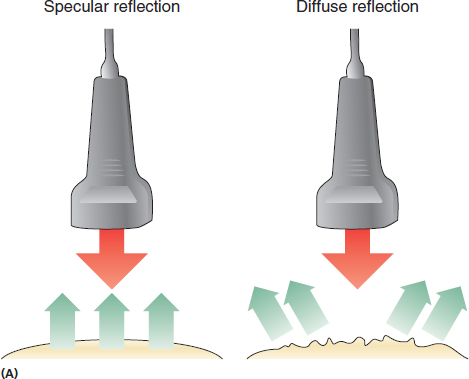 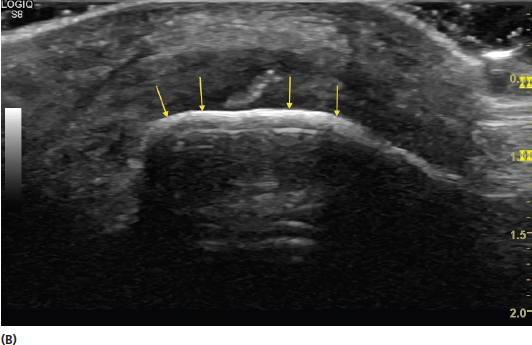 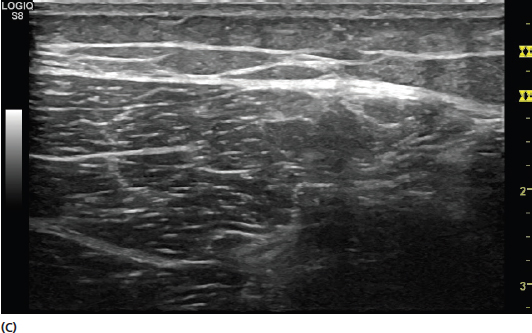 FIGURE 2.6 (A) Illustration of specular versus diffuse reflection. The smooth surface in specular reflection results in more return of the reflected sound waves to the transducer (green arrows) creating a more hyperechoic (brighter) image. The less uniform tissue in diffuse reflection results in less return of the reflected sound waves and a more hypoechoic (darker) image. (B) Sonogram showing the appearance of specular reflection. Note that the large smooth surface of the bone (yellow arrows) leads to a bright signal due to the significant impedance difference between it and the surrounding tissue. (C) Sonogram showing the appearance of more diffuse reflection in muscle tissue. Note that the smaller differences in acoustic impedance reflect various shades of gray rather than the bright signal noted with the interface of bone. 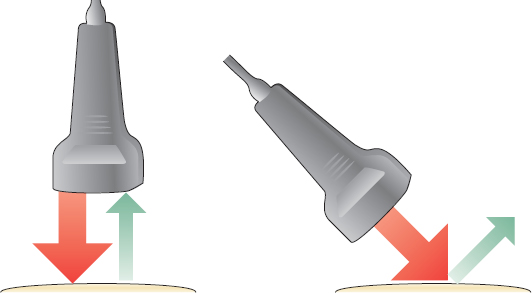 Refraction occurs when the incident sound wave contacts the boundary of tissues at an oblique angle. This causes the reflected sound beam to travel in a direction that is away from the transducer (Figure 2.9). Refraction, therefore, results in a loss of the propagated signal. The conventional settings on the ultrasound instrumentation calculate the returning waves as though they are traveling in a straight line. This leads to a loss of image clarity as the refraction increases.

The direction of the refracted sound waves is predicted by Snell’s law (Sin θi/Vi = Sin θr/Vr). This states that the magnitude of the refraction is directly proportional to the angle of incidence and the difference in velocity of the sound waves within the two tissue types. The relationship of the velocity characteristics of the different tissues also impacts the direction of refraction. If the propagating sound wave is faster in the first tissue because of less tissue impedance, the refraction will be more perpendicular. If the impedance is less in the second tissue with resultant faster sound wave propagation, refraction occurs away from the original direction (Figure 2.9). 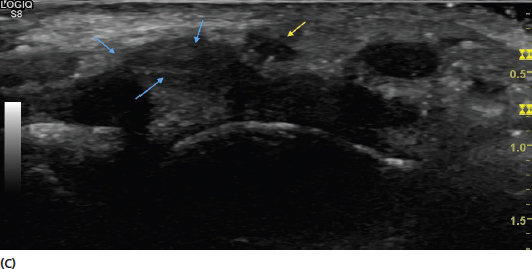 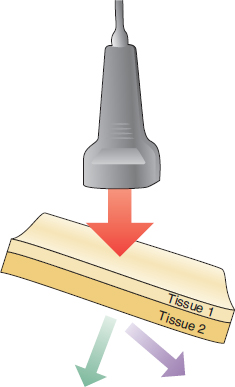 Another source of attenuation of the propagating sound wave is through absorption. This occurs when the sound wave energy is given off as heat. As a result, none of this energy returns to the transducer to contribute to the creation of the signal.

Scatter refers to the propagation of incident sound waves in oblique directions. This occurs when the tissue being observed is not completely heterogeneous or has rough edges (Figure 2.10). The return of these obliquely propagated sound waves is termed backscatter. The random image pattern created by backscatter is termed speckle. 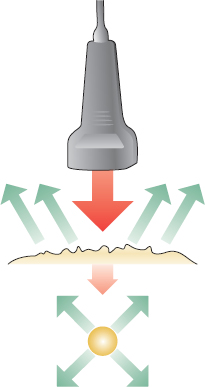 FIGURE 2.10 Illustration demonstrating principles of scatter. Scatter occurs when the incident sound wave (large red arrow) strikes on irregular or nonhomogeneous surface. Portions of the sound waves are scattered randomly, whereas the remainder continues on as a propagating wave (small red arrow). Scatter can also occur when the propagating wave strikes a smaller object such as a red blood cell.

Because of the varying characteristics and properties of tissue, ultrasonic waves can be produced which are not entirely linear. The return of this nonlinear propagation to the transducers produces a pattern distinct from the more linear return echo. These waves are called harmonic frequency waves. These waves are of generally higher frequency than the original sound waves. In some circumstances, the harmonic frequency waves can be evaluated and it can provide an image that has fewer artifacts than the primary propagated wave. This is particularly useful with tissue that has significantly contrasting density.

The speed of sound wave transmission is affected by the properties of the medium in which it is traveling. Sound waves generally travel more slowly in gas mediums, faster in fluids, and fastest in solid material. Ultrasound waves travel through most human tissue at a speed of 1,540 m/s. Ultrasound instruments use this speed for timing the returning echoes to calculate the depth of tissue and constructing images. 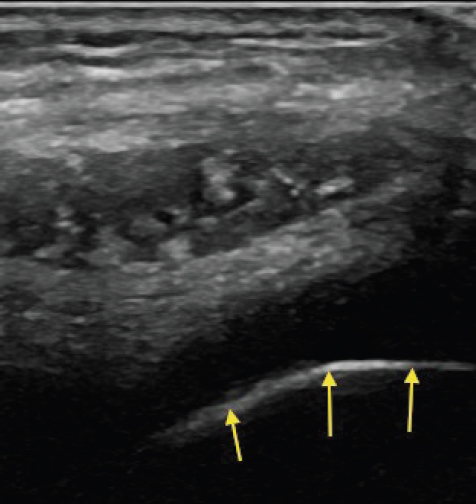 FIGURE 2.11 Sonogram demonstrating the bright signal characteristics from a location with a large difference in tissue impedance. The hyperechoic (bright) signal is seen with relatively low-impedance tissue next to high-impedance bone.

2)     Keep the incident sound waves as close to perpendicular to the tissue under evaluation as possible to allow most of the sound waves to return back to the transducer and therefore, produce best visualization.

3)     Reflection of sound waves back from the tissues with the largest difference in impedance provides the most hyperechoic (brightest) signals. Bone has a very high impedance and appears hyperechoic on ultrasound.