The compression fracture  results when the soft bone of the posterossuperior aspect of humeral head impacts against the harder sharper edge of the anteroinferior glenoid (figure 6-2).8 Anteroinferior glenoid fracture may be an associated finding, usually referred to as bony Bankart lesion, after English orthopaedic surgeon Arthur Sydney Blundell Bankart (figure 6-3).12 US performs better than radiography to identify Hill-Sachs lesions13 and has accuracy rates greater than 90% when compared to arthroscopy and CT arthrography (figure 6-4; video 6-1).14,15 The differential diagnosis of Hill-Sachs lesions includes the naturally occurring bare area of the humerus, which is depicted as a physiological shallow cortical depression located between the articular cartilage and the synovial reflection from the posterior wall of the glenohumeral joint (figure 6-5). Contralateral comparison may be helpful to differentiate the anatomical finding from compression fracture in dubious cases. US can also depict bony Bankart lesions during both static (figure 6-6) and dynamic evaluation (video 6-2). Loss of convexity of the posteroinferior glenoid rim is a feature of congenital glenoid dysplasia or hypoplasia that should not be confused with fracture (figure 6-7).16 US is also useful to assess lesions in dynamic stabilizers, such as the rotator cuff, long head of the biceps brachii and deltoid, which further aggravate instability generated by bone insufficiency secondary to proximal humerus or glenoid fracture. MRI and MR arthrography are advantageous to evaluate recurrent shoulder instability because they allow for detection of deep sited bone and soft tissue pathology (e.g.: labrum) that cannot be reliably assessed at US.

Figure 6-2. Hill-Sachs lesion. Schematic drawing of a superior view of the right shoulder demonstrates the mechanism of a compression fracture in the posterossuperior aspect of the humeral head, the so called Hill-Sachs lesion (arrowhead). Note associated labro-ligamentous injury.

Figure 6-3. Bony Bankart lesion. Schematic drawing of a superior view of the right shoulder demonstrates the mechanism of a bony Bankart lesion. In these lesions, an osseous fragment of variable size is avulsed from the anteroinferior glenoid together with the labro-ligamentous complex.

Figure 6-5. Bare area of the humerus. [A] Positioning of the probe. [B] Corresponding 12-5 MHz US image shows a natural occurring shallow cortical depression located between the articular cartilage and the synovial reflection from the posterior wall of the glenohumeral joint (arrowhead). The bare area enlarges with age. Delt= deltoid. 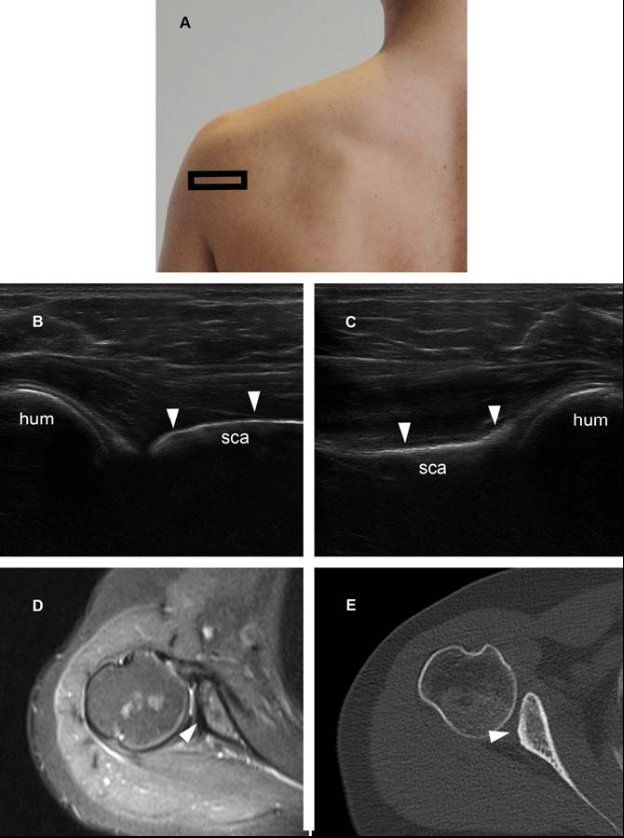 Numerous schemes have been used to classify Hill-Sachs lesions. Rowe classified bone defects as either mild (2.0-cm wide and 0.3-cm deep), moderate (4-cm wide and 0.5-cm deep) and severe (4-cm wide and 1-cm deep).17 Alternatively, Franceschi18 and Calandra11 proposed a classification based upon surface involvement: grade I lesion is strictly cartilaginous, grade II include subchondral bone, and grade Ill are large subchondral defects. Flatow proposed that the relevance of the finding is related to the percentage of the articular cartilage involved: clinically insignificant lesions involve less than 20%, variably significant involve 20-40%, and clinically relevant affect more than 40% of the articular cartilage surface.19 Although larger defects are associated with higher risk for shoulder instability, there is some controversy on how much bone loss is necessary to indicate surgery, and the relative infrequency of symptomatic Hill-Sachs lesions makes it difficult to compare between the different classification systems above. We generally do not measure the area of the lesion because it may provide poorly reproducible data. As an illustrative example, using the popular ellipse formula to calculate volume, a negligible change of only 1 mm in the three orthogonal measurements of the lesion (from 1.5 x 1.5 x 1.5 cm to 1.4 x 1.4 x 1.4 cm) cause a 23% variation in volume estimate (from 1.75 cm3 to 1.42 cm3).

The vast majority of Hill-Sachs lesions are small or medium sized and can be ignored for management purposes. In larger symptomatic lesions associated to labrum or glenoid injuries, the preferred surgical approach usually encompass glenoid-based bone augmentation procedures. Direct treatment of the Hill-Sachs lesion is rarely required.

At US, the reverse Hill-Sachs lesion is depicted as a defect of the anterior aspect of the humeral head (figure 6-10). It is important not to confuse a reverse Hill-Sachs fracture with cortical irregularities related to articular surface partial-thickness tears of the subscapularis tendon. In the former, a deep segment of cortical abnormality is usually detected, whereas in the latter a shallow focal irregularity is the rule. 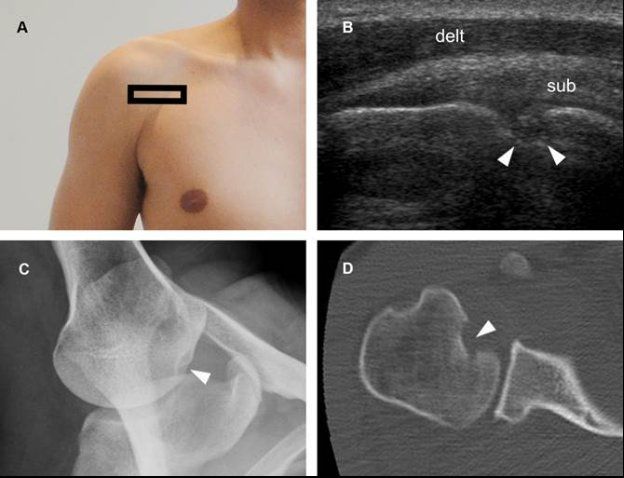 Treatment of reverse Hill-Sachs lesions depends on several variables, including the age and activity level of the patient as well as the size and chronicity of the lesion.25

Most orthopedists consider the size of the lesion relative to the humeral head articular surface to decide the best treatment, and US cannot address this parameter because of shadowing. Therefore, although useful for diagnostic purposes, US has a limited role to define management of medium or large sized symptomatic lesions.

Avulsion fractures are commonly found in older osteoporotic individuals after a fall. The accuracy of physical examination and radiographs to detect such lesions is limited and symptoms may mimic an acute rotator cuff tear.26 Distinction of avulsion fractures from rotator cuff tears is important to optimal treatment and both conditions can reliably be differentiated at US27 or MRI.28 As mentioned earlier, CT is the gold standard to diagnose proximal humerus fractures, but has limitations to detect rotator cuff pathology.

At US, avulsion fractures are depicted as a cortical step-off deformity and may involve the greater or lesser tuberosity. At greater tuberosity, it may affect the insertion of the supraspinatus (figure 6-11) or infraspinatus tendons (figure 6-12); at lesser tuberosity, it usually involves the insertion of the subscapularis tendon (figure 6-13). Since asymptomatic cuff tears are rather frequent in advanced age groups, it is usually not possible to link the fracture and the occasionally associated tear to the same traumatic event (figure 6-14). Whatever the timing of the occasional tendon tear, its importance as a detrimental prognostic factor is debatable because its presence does not appear to be a predictor of shoulder disfunction.29 Avulsion fractures may also be depicted in short-axis images as two distinct parallel hyperechoic lines, the so called double line sign, caused by reflection of the sound waves from the sharp bony edges on either side of the fracture line (figure 6-15).30 This finding should be differentiated from the more common cartilage interface sign, which is not associated with cortical bone deformity (see figure 1-59).

Figure 6-14. Avulsion fracture of the greater tuberosity associated to an intrasubstance partial-thickness tear of the supraspinatus tendon. [A] Positioning of the probe. [B] Corresponding 12-5 MHz US image shows a discrete cleavage plane in tendon substance (asterisk) surrounded by intact fibers and attached to a step-off deformity of the greater tuberosity (arrowheads). Delt= deltoid. Supra= supraspinatus.

A limitation of US is that, despite being sensitive for diagnosis, it is not sufficient to define treatment in surgical candidates. If surgical options are being considered, radiographs, CT, and/or MRI are better suited to assess all different characteristics that are useful to guide treatment, estimate prognosis, and predict complications.31 Avulsion fractures that have less than 45 degrees angulation and less than 1 cm displacement between the major fragments are considered to be minimally displaced for therapeutic purposes.32 Many avulsion  fractures are minimally displaced and can be treated conservatively.33

Fractures of the surgical and anatomical neck of the humerus are typically found in older osteoporotic individuals after a fall. Surgical neck fracture is by definition extracapsular and considered the most common type of proximal humerus fracture. US can depict not only the fracture itself but also the consequent periosteal reaction (figure 6-16). Several studies have shown a higher mortality rate in patients with osteoporosis-related fractures of the hip and vertebrae. A higher mortality rate following a fracture of the surgical neck is also reported, but the cause is currently unknown.34 Traumatic axillary artery pseudoaneurysm and laceration of the long head of the biceps brachii tendon are described as rare complications of displaced fractures.35-38 As in other types of proximal humerus fractures, US is sensitive for diagnosis but limited to define treatment options in surgical candidates. A significant proportion of fractures of the surgical neck is displaced and requires surgical consultation for better management.

Tags: Ultrasound of the Shoulder
Jan 21, 2017 | Posted by admin in ULTRASONOGRAPHY | Comments Off on Spectrum of Findings
Premium Wordpress Themes by UFO Themes
WordPress theme by UFO themes