Sarcoidosis is a systemic noncaseating granulomatous disease of unknown etiology that affects the mediastinum, lungs, and other organs to varying degrees.

In its most severe form, sarcoidosis can manifest as fibrosing mediastinitis with obliteration of the pulmonary arteries (Fig. 11.1) and veins (Fig. 11.2).

Pulmonary hypertension occurs in patients with end-stage lung disease due to sarcoidosis; several mechanisms may contribute, including fibrotic destruction of the capillary bed and resultant chronic hypoxemia, extrinsic compression of the major pulmonary arteries by enlarged lymph nodes, and secondary pulmonary veno-occlusive disease.

Hepatopulmonary syndrome is defined as the triad of hepatic dysfunction, intrapulmonary vascular dilatation, and hypoxemia.

Clinically, it manifests as progressive dyspnea in patients with cirrhosis.

It occurs in 50% of patients with chronic liver disease of any cause. 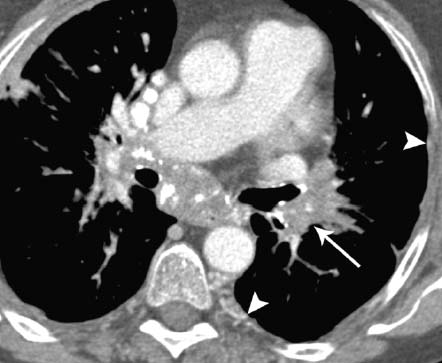 Fig. 11.1 Fibrosing mediastinitis due to sarcoidosis in a 72-year-old man. Axial CT demonstrates extensive mediastinal and hilar lymphadenopathy. There is obliteration of the left lower lobe pulmonary artery by the fibrotic mass (arrow) and intercostal artery collaterals (arrowheads). 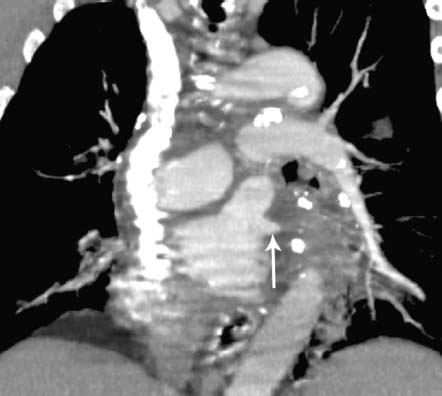 The hypoxemia is due to the presence of numerous tiny intrapulmonary shunts.

Sickle cell disease is a systemic disease that can result in occlusion of the small pulmonary vessels.

In the acute chest syndrome, capillary obstruction by sickle cells is accompanied by in situ thrombosis.

Imaging can demonstrate ground-glass opacification or extensive consolidation due to hemorrhagic edema, which is caused by ischemia, infarction, or infection and is responsible for precipitation of the acute chest syndrome (Fig. 11.4).

CT can show mosaic attenuation, thought to be related to secondary pulmonary lobules with hypoperfusion adjacent to normal or hyperperfused lobules (Fig. 11.4).

Chronic changes are seen in individuals experiencing repeated acute episodes, with parenchymal bands due to fibrosis of infarctions (Fig. 11.4).

Eventually, in patients with persistent occlusion of the microvascular bed, cor pulmonale develops, manifested as dilatation of the pulmonary arteries and right ventricular hypertrophy. 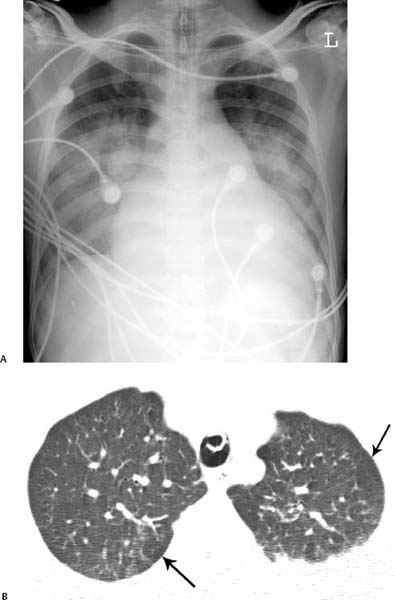 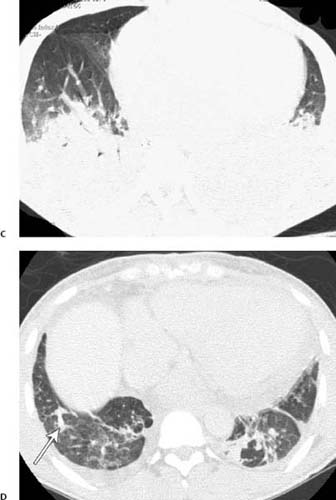 In premature neonates, the high pressures of oxygen delivery can result in necrotizing vasculitis, bronchiolitis, and alveolar septal injury.

CT features in older survivors include extensive areas of decreased lung attenuation, within which the size and number of vessels and bronchi are reduced as a consequence of chronic changes in the lung parenchyma, vessels, and airways (Fig. 11.5). 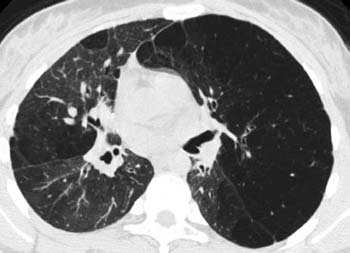 Fig. 11.5 Bronchopulmonary dysplasia in a 13-year-old girl. High-resolution CT demonstrates a mosaic pattern of lung attenuation. The more lucent regions of lung have small vessels, consistent with chronic vessel damage or shunting of blood to the more attenuating and functional regions of lung. There is also shift of the mediastinum from left to right secondary to a large left lung volume resulting from air trapping. The bronchi and bronchioles in the lucent regions of lung are also noted to be small in diameter.

Idiopathic pulmonary hemosiderosis is a rare cause of diffuse alveolar hemorrhage and, by definition, of unknown etiology.