The Biliary Tree and Pancreas

The Biliary Tree and Pancreas

Radiological evaluation and percutaneous transcatheter intervention in the pancreas and biliary tree constitute a substantial subset of gastrointestinal radiology and intervention. The anatomic proximity of the pancreas and biliary tree and the fact that disease in one area often has a profound effect on the other make it logical to consider both in the same chapter.

Percutaneous radiological evaluation and intervention are usually sought in a patient with suspected obstructive jaundice. Before percutaneous procedures are undertaken in the bile duct, as much information as possible should be obtained from the clinical history and physical examination. Noninvasive studies should be obtained to confirm the presence of an obstruction and to evaluate for any related findings that could significantly affect the safety and feasibility of the percutaneous intervention.

If obstructive jaundice is clinically suspected, ultrasound should be one of the initial imaging studies. It is noninvasive, it is excellent for detecting bile duct distentsion (Fig. 32-1), and it can yield information about the state of the liver parenchyma. At times, in addition to the intrahepatic bile ducts, the pancreas and distal bile ducts can be evaluated. Ultrasound also can yield information about the presence of ascites, which is extremely relevant when planning percutaneous interventions, as will be discussed later. 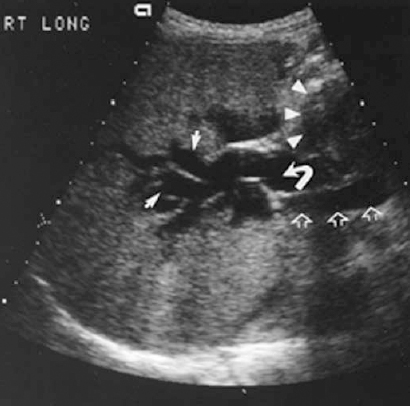 Computerized tomography (CT) is also valuable, especially if it is performed with intravenous contrast (Fig. 32-2). Although slightly less sensitive to intrahepatic bile duct dilation than ultrasound, CT yields additional important information that is often difficult to obtain with ultrasound (e.g., the cause of distal bile duct obstruction, the presence of liver metastases or primary tumors elsewhere in the body that may be metastatic to the liver). CT is also less operator dependent than ultrasound, although it is more expensive and the use of intravenous contrast makes it slightly more invasive. 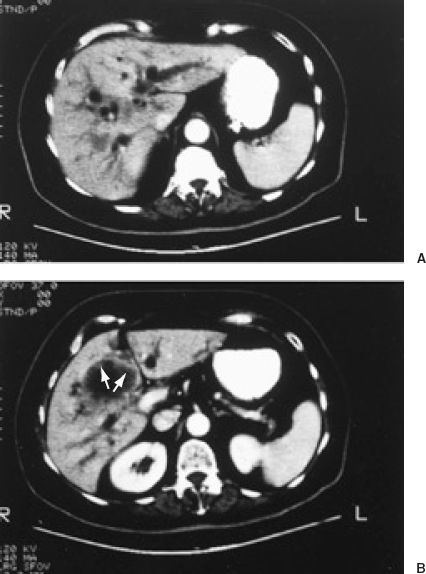 FIGURE 32-2. Computed tomography (CT) with intravenous contrast in a patient with gallbladder carcinoma and biliary obstruction. A: Dilated intrahepatic ducts are seen as circular and tubular hypodense structures. B: Thickened irregular gallbladder wall (arrows)is seen in a more caudal image.

Cholescintigraphy with hepatic 2,6-dimethyliminodeacetic acid (HIDA) and related agents is sometimes useful for assessing biliary tract functional status. A mechanical obstruction usually is associated with the absence of radionuclide activity in the bowel even on delayed images.

Magnetic resonance (MR) imaging and MR cholangiography hold promise for the noninvasive evaluation of the biliary tree. With MR cholangiography, computer manipulation and reconstruction of stacked cross-sectional images can yield three-dimensional maximum intensity projection (MIP) reconstructions, which can be rotated in different directions to provide views of the bile ducts from different angles. Various MR techniques are available for suppressing surrounding tissues and enhancing the cholangiographic quality of the acquired image.1

Contrast cholangiography can be performed either by direct retrograde catheterization of the bile ducts through an endoscope (endoscopic retrograde cholangiography or ERC) (Fig. 32-3) or by percutaneous transhepatic cholangiogram (PTC) using a skinny needle (21 or 22 gauge). The endoscopic approach has the advantage of studying the biliary tract without some of the risks associated with the percutaneous transhepatic needle route. It also affords the possibility of studying the pancreatic duct as well as the common bile duct (endoscopic retrograde cholangiopancreatography, or ERCP). In addition, if desired, definitive therapy for a biliary stricture may be instituted in the form of transendoscopic papillotomy or placement of an internal stent. 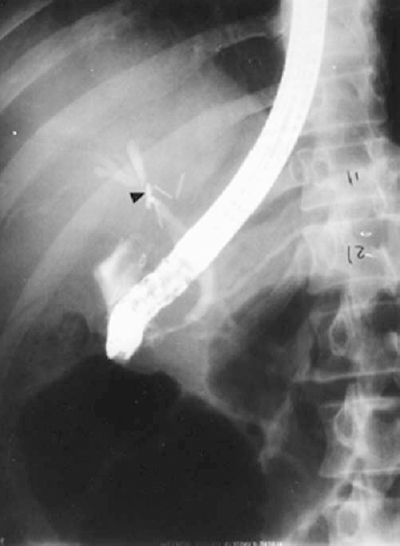 ERCP is technically infeasible in certain situations, such as previous Roux-en-Y hepaticojejunostomies and high proximal biliary strictures refractory to contrast opacification of the peripheral intrahepatic bile ducts. In such situations as well as in centers that do not have skilled endoscopists, contrast cholangiography can be obtained only through the percutaneous transhepatic route. In percutaneous transhepatic cholangiography, a 21- or 22-gauge needle is passed through an anesthetized area on the overlying skin, through the liver parenchyma, to a biliary radicle, allowing direct contrast opacification of the bile duct. 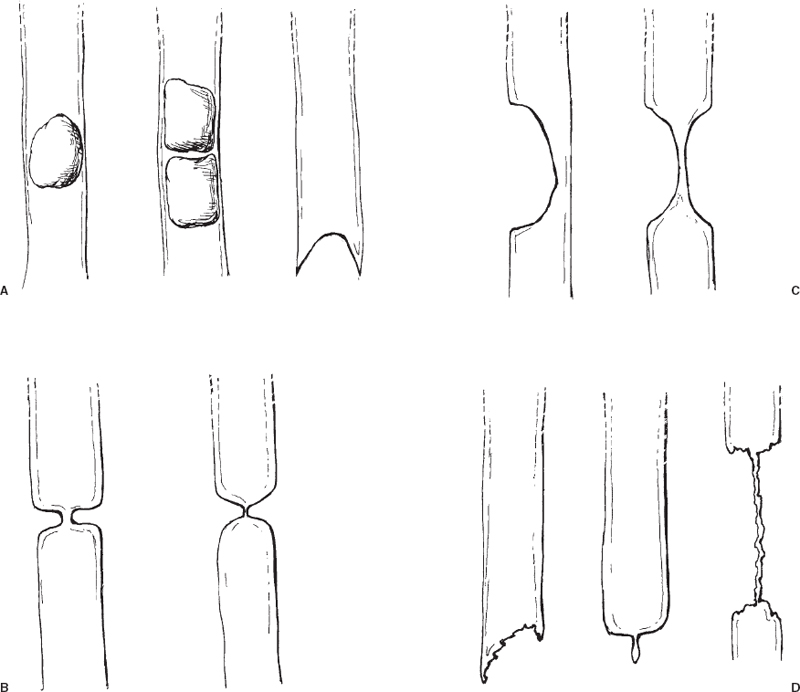 Nonmalignant etiologies of bile duct strictures, or “benign” bile duct strictures, include postoperative strictures, calculi, inflammatory strictures related to chronic cholecystitis (Mirizzi syndrome), chronic pancreatitis, and sclerosing cholangitis. Postoperative strictures can occur at the site of previous duct injury or repair (see Fig. 32-3) or at a site unassociated with the previous duct anastomosis. Strictures that occur after duct transsection and reanastomosis are often due to scar formation at the anastomosis site. Strictures that occur somewhat remote to the original site of ductal manipulation are presumed to be ischemic in etiology, perhaps related to pressure injury or thermal injury.

Purely inflammatory strictures of the common hepatic duct (CHD) or common bile duct (CBD) are usually the result of chronic cholecystitis or chronic pancreatitis. In chronic cholecystitis, inflammation of the gallbladder and cystic duct can cause them to thicken to the extent that they extrinsically compress and obstruct the adjacent CHD or CBD (Mirizzi syndrome) (Fig. 32-5). Chronic pancreatitis also can result in more distal extrinsic narrowing or stricturing of the CBD (Fig. 32-6). 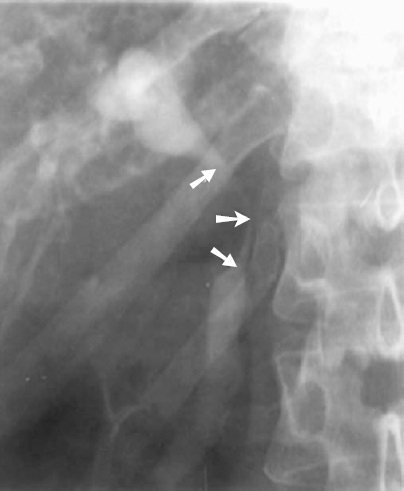 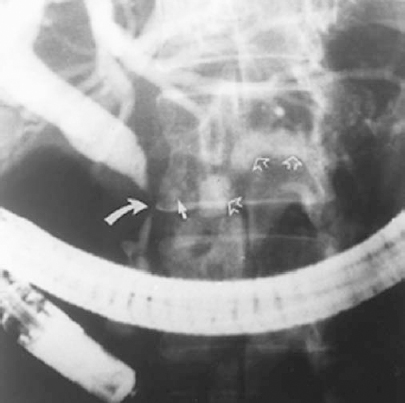 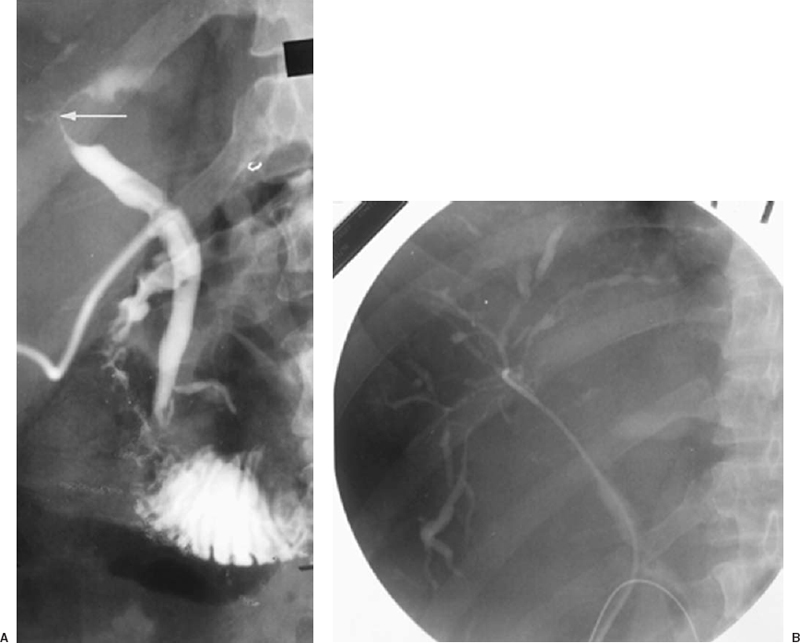 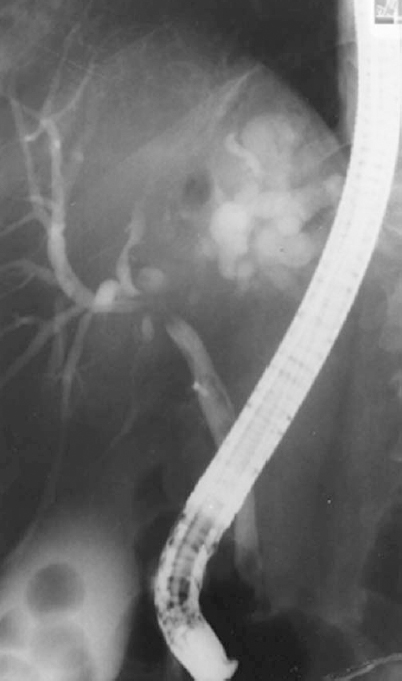 FIGURE 32-8. Endoscopic retrograde cholangiography (ERC) demonstrating a cholangiocarcinoma involving the confluence of the right and left hepatic ducts and proximal common hepatic duct. Left hepatic ducts are totally obstructed. This type of lesion is sometimes referred to as a Klatzkin tumor. 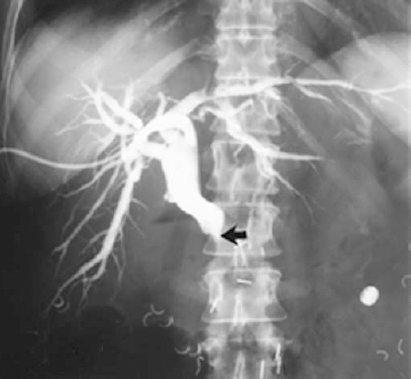 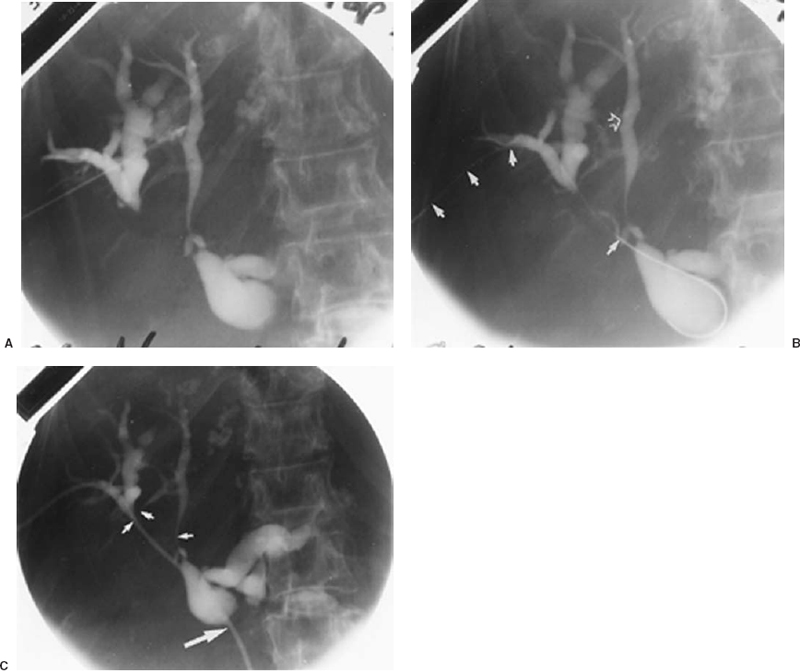 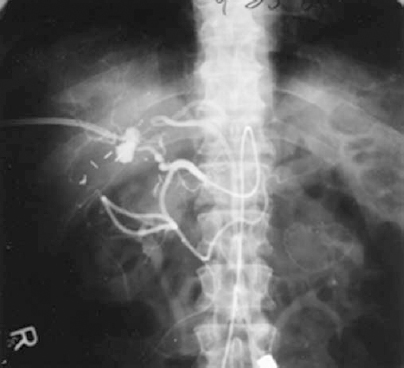 Unfortunately, much overlap may exist between the cholangiographic appearance of benign and malignant strictures. Sclerosing cholangitis can be mimicked by diffuse liver metastases and cholangiocarcinoma. Postoperative or inflammatory strictures or obstructions occasionally are indistinguishable from those of malignant etiology. The clinical and surgical history might be helpful in differentiating malignant from nonmalignant causes. A brush biopsy by endoscope or percutaneous transhepatic tract can be used to help make a diagnosis, as can percutaneous needle biopsy of periductal tissue using a previously placed biliary stent for fluoroscopic guidance to the lesion. Occasionally, the definitive diagnosis is not known until surgery.

The best possible therapeutic option for a patient with obstructive jaundice is a surgical resection of the offending lesion and revision of the bile duct, which has the potential for long-term cure and is feasible in patients with nonmalignant strictures in such anatomic locations that complete resection of the stricture still allows for tension-free anastomoses. In many medical centers, this category is limited to lesions in the extrahepatic duct (CHD or CBD). Occasionally, malignant strictures can be curatively resected and bypassed. Sclerosing cholangitis involving only the extrahepatic duct (unusual) is also amenable to surgical bypass. One study noted an 88% five-year sympton-free outcome in patients who underwent surgical correction of benign postoperative strictures.4 In patients in whom surgery is not a viable option, percutaneous biliary intervention should be considered. Percutaneous biliary interventions include biliary drainage catheter placement, antegrade placement of internal bile duct stents, bile duct stricture balloon dilatation, percutaneous cholecystostomy, and gallstone extraction.

The main indications for percutaneous biliary drainage (PBD) are the relief of jaundice resulting from inoperable obstruction or relief of septic cholangitis. Many patients who present with obstructive jaundice are unfit for surgery because their disease is too advanced (i.e., short life expectancy), they are poor medical risks for the required major surgery that the biliary reconstruction requires, or the offending lesions are in anatomic positions that are not amenable to durable surgical bypass (e.g., the intrahepatic ducts or hepatic duct confluence.) Such patients are committed to transcatheter prosthesis palliation. Such a prosthesis can be placed either by retrograde endoscopic approach or by percutaneous transhepatic access. Patients with obstructive jaundice who are surgical candidates but who have septic cholangitis should undergo external biliary drainage to allow resolution of the cholangitis before surgery. The value of preoperative percutaneous biliary drainage in patients who are not septic is controversial because there is no published evidence to suggest that preoperative reduction of the bilirubin level has any beneficial effect on subsequent surgical morbidity or mortality.5,6 Despite this lack of published proof, many surgeons believe that preoperative drainage is of some benefit and continue to refer patients. Furthermore, many surgeons prefer mapping by PTC before bile duct revision, and if this study discloses biliary obstruction, decompression is mandated.

A suitable skin entry site is chosen in the region of the right mid to anterior axillary line over the right upper quadrant of the abdomen. The exact location is guided by fluoroscopic observation of the liver and diaphragm, taking care to choose an approach with minimum risk of a transpleural tract. Fluoroscopic observation of a metal marker at the planned entry site while the patient takes a deep breath is usually enough to accomplish this step. The tract, by necessity, is almost always intercostal. Entry should be over the lower rib rather than under the upper rib of the intercostal space to minimize risk of trauma to the intercostal artery and irritation of the intercostal nerve that might render the drainage catheter more painful.

Adequate conscious sedation is needed because percutaneous biliary manipulation can be quite painful, especially in patients with fibrotic livers resistant to catheter advancement. Lidocaine anesthesia is given along the tract from the skin to the peritoneum. Then a percutaneous transhepatic cholangiogram is performed by advancing a 21- or 22-gauge needle into the liver. Dilute contrast is infused gently into the needle as it is slowly retracted under fluoroscopic observation until the characteristic pattern of bile duct filling is identified. This is manifested by filling of tubular lumina with contrast that does not wash away (Fig. 32-10A). In attempting to opacify the biliary tree, the needle tip may traverse or lodge in a portal vein, hepatic vein, hepatic artery, or lymphatic. Each of these nonbiliary lumina has a characteristic orientation and appearance that differentiate it from a bile duct, and contrast invariably will wash out of the lumen in all of these nonbiliary structures.

Once a biliary radicle is entered, contrast is injected slowly and gently. Care should be exercised to avoid over-distension of the obstructed biliary tree, which could increase the chance of sepsis. A few milliliters of contrast are injected, followed by aspiration of an equal number of milliliters through the same needle to progressively exchange bile for contrast to visualize as much of the biliary tree as possible. Because iodinated water soluble contrast flows into the most dependent locations, tilting the patient semiupright can be helpful in allowing opacification of the central bile ducts with less overall volume of injected contrast. When sufficient anatomy is apparent, diagnostic images are obtained. The definitive drainage procedure is completed by the originally entered duct, if it is suitable in location and vector or by advancing another needle into a more suitable duct under fluoroscopic guidance (see Fig 32-10B). A rotating C-arm fluoroscopy unit is most helpful for delineating the three-dimensional array of the biliary system in planning definitive access. Coaxial micropuncture access systems are used most often to achieve definitive drainage, either by the initial PTC site or by a different duct (see Fig. 32-10