The Christ Hospital Heart and Vascular Center of Greater Cincinnati, The Lindner Center for Research and Education, Cincinnati, OH, USA
(2) 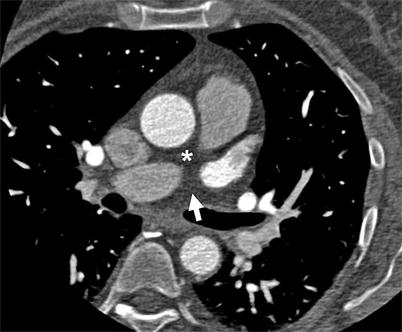 The right atrium (RA) lies to the right and anterior to the left atrium (LA). It contains three basic components: the venous component, the appendage, and the vestibule of the tricuspid valve (Fig. 2.3).

The anatomy of the right atrium contains three sections: the venous (double arrow), appendage (RAA), and the vestibule (asterisk). Ao aorta, CS coronary sinus, IVC inferior vena cava, MPA main pulmonary artery, RAA right atrial appendage, RV right ventricle, SVC superior vena cava, TV tricuspid valve
The triangular-shaped right atrial appendage is separated externally from the superior and inferior vena cava by the terminal groove. Internally, the terminal groove corresponds to the location of the terminal crest which extends inferiorly from the left side of the superior vena cava (SVC) entrance to the right side of the inferior vena cava (IVC) opening where it ramifies into an isthmus between the IVC and tricuspid valve (cavotricuspid isthmus) [1, 2]. The most characteristic feature of the morphology of the right atrial appendage is the pectinate muscles that extend around the entire parietal margin of the atrioventricular junction. The sinus node is located within this chamber, usually lying to the right of the superior cavoatrial junction [3].
The venous portion of the right atrium is positioned in the right side of the right atrium. There is no well-defined border between the appendage and the venous component of the right atrium [4]. Superiorly and inferiorly the venous component connects with the SVC and IVC, respectively. The posterior atrial wall between the orifices of the cavae forms the intercaval area [2]. The opening of the SVC has no valve. The IVC orifice is guarded by the Eustachian valve, which extends anteriorly and to the left from the lateral margin of the IVC to the sinus septum (Eustachian ridge) [2, 5]. The coronary sinus enters the RA close to the right side of the IVC ostium. The Thebesian valve, a small crescent-shaped, sometimes fenestrated flap [2], accompanies the coronary sinus orifice.
The posterior aspect of the RA contains the atrial secundum, which is virtually confined to the fossa ovalis. The superior rim of the fossa ovalis is an extensive infolding between the venous component of the right atrium and the right pulmonary veins, while the posterior inferior rim is directly continuous with the sinus septum that separates the orifices of the IVC and the coronary sinus. The anteroinferior margin is adjacent to the triangle of Koch (see description below) [5–7]. The floor of the fossa ovalis is formed by a fibromuscular flap valve that fuses with the rim of the fossa ovalis, resulting in closure of the fossa. In 25–30 % of individuals, the anatomical fusion is incomplete (usually at the anterosuperior margin), leading to interatrial shunting in some individuals [2].
The vestibular component is positioned in the left side of the right atrium and forms the outlet of the RA. It contains the triangle of Koch, which is an anatomical landmark for the atrioventricular node (AV node). The triangle of Koch is demarcated by (a) the tendon of Torado, a fibrous structure formed by the junction of the Eustachian valve (valve of the IVC) and the Thebesian valve (valve of the coronary sinus); (b) the ostium of the coronary sinus posteriorly; and (c) the septal leaflet of the tricuspid valve [5, 8]. Of note, the septal isthmus is not truly septal but rather the inferior part of the anteromedial RA wall [2].

The cardiac valves are in close proximity to each other. The leaflets of three of the valves are in fibrous continuity, while the pulmonary valve leaflets are exclusively supported by a free-standing muscular infundibulum. The fibrous continuation between the mitral and aortic valve is established by the continuity between the anterior leaflet of the mitral valve (called the aortic leaflet) and the noncoronary and right coronary leaflets of aortic valve (Fig. 2.4). Laterally the fibrous tissue is thickened and forms the right and left fibrous trigones. The right fibrous trigone joins the membranous septum, creating the central fibrous body. Superiorly the aorto-mitral continuity extends into the interleaflet triangles positioned at the level of the noncoronary leaflet of the aortic valve. The central fibrous body brings the aortic and mitral valves into fibrous continuity with the tricuspid valve. The septal leaflet of the tricuspid valve is attached to the right ventricular aspect of the membranous septum which divides the septum atrioventricular and interventricular components. The morphology of the individual cardiac valves is elucidated further in the following sections.

A rendition of the continuity between the mitral and aortic valves. The membranous septum is in continuation with the right fibrous trigone and the interleaflet triangle between the right and noncoronary aortic valve leaflets. The right fibrous trigone and the membranous septum form the central fibrous body of the heart. RCA right coronary artery, LMCA left main coronary artery

The right ventricle (RV) extends from the atrioventricular junction toward the left to the cardiac apex and cephalad to the ventriculoarterial junction. The tricuspid and pulmonary valves demarcate the RV from the right atrium and pulmonary trunk, respectively. The RV has three distinct components: (1) the inlet, (2) the apical, and (3) the outlet (Fig. 2.5) [13].

The left ventricle (LV) extends from the atrioventricular junction to the left and anterior to the heart apex and cephalad to the ventriculoarterial junction. The mitral and aortic valves separate the LV from the LA and aorta, respectively. Similar to the RV, the LV can be subdivided into three components: (1) inlet, (2) apical, and (3) outlet. The distinction between them, especially between the inlet and outlet portions, is less clear than in the RV.
Only gold members can continue reading. Log In or Register to continue