Carbon-ion RT was given daily at 4 days per week (Tuesday to Friday). At every treatment session, the patient was positioned on the treatment couch while wearing the immobilization devices, and the patient’s position was verified with a computer-aided, online positioning system. To minimize internal target positional uncertainty, 100–150 mL of normal saline was infused into the bladder. Patients were also encouraged to use laxatives, if necessary, to prevent constipation throughout the treatment period. The radiation dose was calculated for the target volume and surrounding normal structures and was expressed in GyE, defined as the carbon physical dose (Gy) multiplied by a relative biological effectiveness value of 3.0.
The treatment consisted of prophylactic whole pelvic or extended-field irradiation and local boost. Planning computed tomography (CT) scan is basically performed three times during the course of the treatment, and the clinical target volume (CTV) of local boost is reduced twice in accordance with tumor shrinkage. The clinical target volume of whole pelvic irradiation (CTV-1) includes CTV for primary disease and prophylactic area of lymph nodes, which are all areas of gross and potentially microscopic disease. The clinical target volumes for primary disease and lymph nodes are similar to those for photon irradiation [10–14]. The clinical target volume for primary disease consists of the tumor, uterus, ovaries, parametrium, and at least the upper half of the vagina [10]. The clinical target volume for pelvic lymph nodes consists of the area of common iliac, internal iliac, external iliac, obturator, and presacral lymph nodes and that for extended-field consists of the pelvic lymph node area and para-aortic lymph node area (Fig. 29.2a–c) [14]. 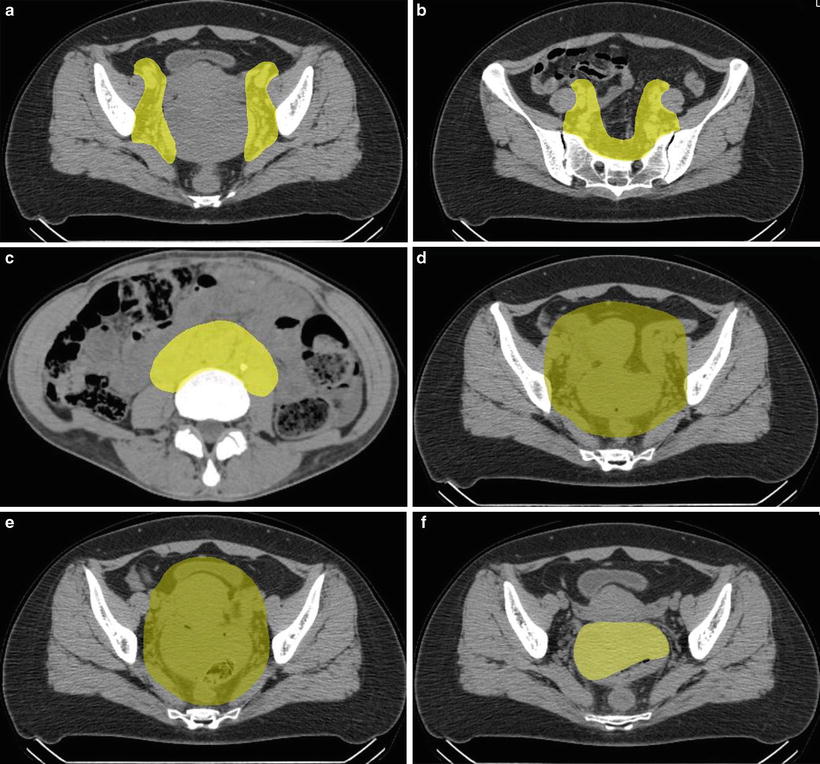 (a, b) Clinical target volume for pelvic lymph nodes. (c) Clinical target volume for para-aortic lymph nodes. (d) Clinical target volume 1. (e) Clinical target volume 2. (f) Clinical target volume 3
The planning target volume (PTV-1) includes CTV-1 plus a 5-mm safety margin for positioning uncertainty and the uterus plus a 1.5-cm safety margin for intra- and inter-movement. CTV-1 is covered by at least 90 % of the prescribed dose (Fig. 29.2d). After completing CTV-1 irradiation, first reduction of CTV includes the gross tumor volume (GTV) and uterine cervix, uterine corpus, parametrium, upper half of the vagina, and ovaries (=CTV-2). A 5-mm margin was added to PTV-2 (Fig. 29.2e). Finally, CTV is shrunk to GTV only (CTV-3), and no margin was added to PTV-3 (Fig. 29.2f). Normal tissue structures, such as the rectum, sigmoid colon, bladder, and the small bowel in the pelvis, were excluded from PTV as much as possible.
In the first two clinical trials of C-ion RT (9403 and 9702) for squamous cell carcinoma of the uterine cervix, 18 % of the patients developed major gastrointestinal (GI) complications [15]. Therefore the treatment technique was revised after 2000. The dose to the GI tracts was limited to <60 GyE according to DVH analysis, and this limitation had higher priority than the prescription to PTV-3 as final boost irradiation [15]. In addition, vaginal packing for spacer between tumor of uterine cervix and rectum has been placed at the time of C-ion RT since 2002 (Fig. 29.3). 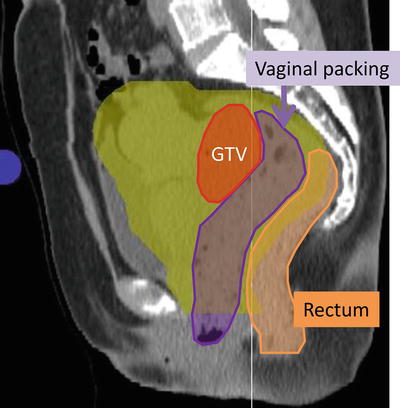 Vaginal packing (purple area) for spacer between tumor of uterine cervix (red) and rectum (orange)
The treatment schedule for locally advanced squamous cell carcinoma of the uterus consisted of irradiation of PTV-1, PTV-2, and PTV-3 in 13, 5, and 2 fractions, respectively. The first three clinical trials (protocols 9403, 9702, and 9902) were dose-escalation trials, and the fourth (protocol 0508) included extended-field irradiation. In protocol 9902, based on DVH analysis of protocols 9403 and 9702, the doses to PTV-1 and PTV-2 were fixed at 39.0 GyE in 13 fractions and 15.0 GyE in 5 fractions (3.0 GyE per fraction), respectively. With regard to local boost, a dose-escalation study was planned with an initial dose of 10 GyE in 2 fractions to PTV-3. The dose to all GI tracts was strictly limited to <60 GyE to prevent major late toxicities. The initial dose was determined based on the results of protocols 9403 and 9702, in which 18 % of patients developed major late GI complications, and dose escalation to 18 GyE in 2 fractions was performed after careful observation of late toxicity according to discussions of the Working Group of the Gynecological Tumor on a semiannual basis. Total dose to the cervical tumor was 64.0–72.0 GyE in 20 fractions. In protocol 0508, CTV-1 is CTV of whole pelvic irradiation with para-aortic lymph node area. The doses to PTV-1, PTV-2, and PTV-3 in 0508 were fixed at 39.0 GyE in 13 fractions, 15.0 GyE in 5 fractions, and 18 GyE in 2 fractions, respectively (Fig. 29.4).

Treatment schedule of protocols 0508 and 9902
In the treatment schedule for locally advanced adenocarcinoma of the uterus (protocol 9704), PTV-1, PTV-2, and PTV-3 were irradiated with 12, 4, and 4 fractions, respectively (Fig. 29.5). This clinical trial was a dose-escalation trial. Based on the results of a previous study (protocol 9403), the dose to PTV-1 was fixed at 36.0 GyE in 12 fractions (3.0 GyE per fraction) in this protocol. With regard to local boost, a dose-escalation study was planned with an initial dose of 26.4 GyE in 8 fractions, then gradually increasing up to 38.4 GyE in 8 fractions by 2.4 or 3.6 GyE increments. Dose escalation was performed after careful observation of acute normal tissue responses according to discussion twice per year of the Working Group of the Gynecological Tumor. Total dose to the cervical tumor was 62.4–74.4 GyE over 20 fractions.

Between December 1997 and January 2011, 62 patients with locally advanced squamous cell carcinoma of the uterine cervix were treated with C-ion RT. Patients with histories of prior chemotherapy or pelvic radiotherapy were excluded from the studies. Patient characteristics are summarized in Table 29.1. Overall treatment time (OTT) ranged from 32 to 48 days, with a median of 36 days. The median follow-up durations for all patients and surviving patients were 29 and 49 months, respectively.

All of the observed acute and late toxicities are listed in Table 29.2. Although 28 patients (45.2 %) developed acute GI toxicity (G1–G2) and 15 patients (24.2 %) had acute GU toxicity (G1–G2), all patients completed the scheduled therapy. No patient developed grade 3 or higher acute toxicity. As for late toxicities, 20 patients developed GI complications (G1–G4). Among them, 18 patients had mild or intermediate bleeding of the rectum or sigmoid colon. Only one patient had rectal complication of G4, which was surgically salvaged, and the other had severe rectal bleeding. These cases were treated before revision of the treatment technique. Fifteen patients had grade 1 or 2 late GU toxicities, and no patient developed grade 3 or higher toxicity.