Fig. 1
Biocontinuum of adverse and late effects for the female reproductive system (with permission from Rubin and Casarett 1968)
The uterus and vagina are not required for daily living but are needed intermittently for reproduction and sexual activity. As a result, there is a conception that the gynecologic organs are tolerant of radiation. In fact, it is more accurate to state that loss of uterine or vaginal function is an accepted consequence of radiation therapy. In fact, the limiting adverse effect for the treatment of gynecologic cancer is generally not an effect on the target organ, as for many cancers, but instead it has effects due to effects on the adjacent critical organs, the bowel and the bladder. Most women accept the loss of childbearing potential resulting from pelvic irradiation—either because they have completed childbearing, or because effective treatment of malignancy requires it. The impact of irradiation of gynecologic organs on sexual functioning can be difficult to quantitate and is often multifactorial. Recent development of validated questionnaires has led to a better assessment of these adverse effects.
The most common adverse effects of pelvic irradiation for gynecologic cancer are gastrointestinal and genitourinary. Most women (approximately 70–80 %) experience diarrhea and dysuria during radiation treatment; these adverse effects are generally grade 1 or 2 and can be managed readily with medications (Vaz et al. 2008). Acute gynecologic adverse effects of pelvic irradiation are less common than gastrointestinal and genitourinary effects (except in the case of vulvar irradiation, which as previously mentioned produces desquamation of the vulva in the first few weeks of radiation treatment). However, pelvic irradiation can produce long-term gynecologic adverse effects that can significantly reduce patients’ quality of life. Recent studies have shed light on the long-term impact of radiation therapy on the function of the gynecologic tract. These studies have more clearly defined the impact of radiation-related adverse effects on the quality of women’s lives with regard to changes in body image and sexual functioning (Vaz et al. 2008; Bruner et al. 1993; Jensen et al. 2003; Frumovitz et al. 2005; Park et al. 2007).
The side effects of radiation therapy for gynecologic malignancies can be difficult to separate from complications of the cancer itself or complications of other modalities of cancer treatment, such as surgery and chemotherapy. For example, vaginal dryness can be caused by both ovarian failure and vaginal irradiation. A superimposed yeast infection can be mistaken for skin reaction following vulvar irradiation. And sexual dysfunction in patients treated with a radical hysterectomy and radiation therapy is likely to be multifactorial.
Much of the information available on toxicity to the gynecologic organs comes from the treatment of women with cervical cancer, because of the need to treat to high doses for definitive treatment. Furthermore, because of the high rate of success of radiation therapy for cervical cancer and the fact that many patients with cervical cancer are young, women who develop toxicity to the gynecologic tract may suffer for years from radiation-related adverse effects. As a result, understanding and minimizing radiation damage to the gynecologic tract is of particular importance.
Figure  1 illustrates the Biocontinuum of adverse and late effects of the ovary.

The ovaries are approximately 3 cm long, 1.5 cm wide, and 1 cm thick and lie lateral to the uterus near the pelvic wall in the ovarian fossa. They lie anterior to the ureter and internal iliac artery. Each ovary is attached to the uterus via the ovarian ligament and is surrounded by the infundibulum of the fallopian tube superiorly and laterally (Fig. 2).

The uterus is a flexible organ that has evolved to expand to accommodate a growing fetus. The uterus lies in the midline of the pelvis, posterior to the bladder, and anterior to the rectum. It is attached to the pelvis by two ligaments; the broad ligaments, which stretch with expansion of the pregnant uterus, and the uterosacral ligaments that attach the posterior cervix to the pelvic sacrum. The cardinal ligaments attach the lateral aspects of the cervix to the ischial spines.

The vagina is a flexible muscular tube extending from the cervix to the vestibule that has evolved to permit passage of the fetus through the vaginal canal and coitus. The vestibule is enclosed by the inner labia, the labia minora. The labia minora meet anteriorly at the clitoris and posteriorly form the fourchette. The most external portion of the vulva, forming the mons pubis, is the labia majora.

3 Histology and the Functional Subunit

The innermost layer of the uterus, the endometrium, is comprised of columnar gland-forming cells. The muscular myometrium is comprised of randomly interlocking smooth muscle fibers. The peritoneum covers the fundus of the uterus, forming an outer serosal coat that extends laterally in the broad ligaments (Fig. 3c).

3.4 The Vagina and Vulva

The vagina and vulva are lined with stratified squamous epithelium, keratinized in the vulva, which overlies connective tissue containing elastic fibers, mucus-forming glands, sweat glands, and sebaceous glands. The glands are required for vaginal lubrication, which is necessary for coitus (Fig. 3f).

The principle functions of the system include: (1) production of female gametes, the ova, by a process of oogenesis; (2) reception of male gametes, the spermatozoa; (3) provision of a suitable environment for fertilization of ova by spermatozoa and for development of the fetus; (4) a mechanism for the expulsion of the developed fetus to the external environment (Zhang 1999).

In humans, the endometrium undergoes hormonally modulated alterations, known as the menstrual cycle, which is usually of 28 days duration. The uterus provides a suitable environment for implantation of the fertilized ovum and development of the embryo and fetus during pregnancy (Zhang 1999).

Vagina is an expansible fibromuscular tube. It is specialized for the reception of the penis during copulation and the passage of the fetus to the external environment (Zhang 1999).

The rapidly proliferating granulosa cells in ovaries are radiosensitive (more so than the oocytes), and within hours of irradiation, the granulosa cells show morphologic changes such as pyknosis, degenerative changes, and early necrosis. The granulosa cells secrete paracrine factors—including estrogen, which is required by the oocytes for maturation. As a result, the risk of infertility is closely tied to the risk of premature menopause in women and children exposed to ovarian irradiation. The granulosa cells are dividing most rapidly during the mid-portion folliculogenesis and are most sensitive to radiation at this time (Grigsby et al. 1995). As a result, the toxicity of ovarian radiation, which includes both menopause due to loss of estrogen secretion and infertility, due to loss of functional oocytes, is due to damage to the radiation sensitive estrogen secreting granulosa cells.(Grigsby et al. 1995). The primordial follicles are arrested in meiosis and are relatively radiation resistant. Of note, it is possible for fertility to be temporarily preserved following radiation therapy owing to the survival of developed oocytes, which are not dependent on granulosa cell proliferation for their survival (Fig. 4a). 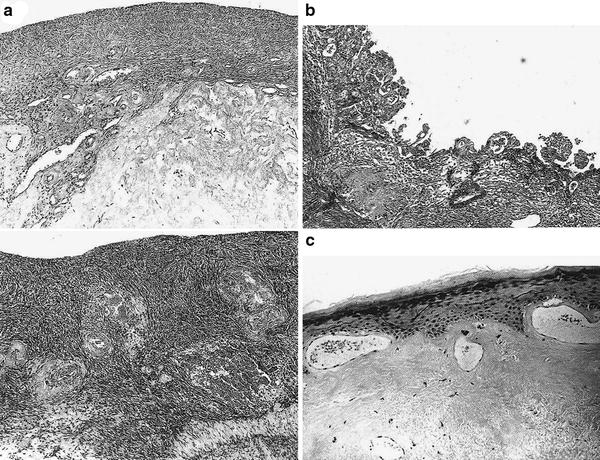 Fig. 4
a Atrophic ovary: cortical atrophy and hyaline fibrosis of the hilum are severe in the irradiated ovary are shown above. Normal Ovary shown below. b Photomicrograph of endometrium 6 weeks postradiation shows pseudopapillary and atypical hyperplasia. The nuclei are occasionally hyperchromatic and enlarged, and microcystic abnormalities are present. The endometrial stroma shows hyaline sclerosis. c This photomicrograph shows a characteristic postradiation injury of the cervix with hyperkeratosis, mild atypical squamous epithelial changes, subepithelial telandiectasias, and amorphous hyaline fibrosis of the submucosa. (Reproduced from Fajardo Pathology of Radiation Injury, Masson Publishing, USA, NY, 1982, with permission.)
Generalized acute changes from irradiation of the ovary include endothelial cell swelling and microvascular thrombi. Years after radiation therapy, the ovaries appear grossly contracted and fibrotic, similar to postmenopausal atrophic ovaries; microscopically, the ovaries lack follicles and have thick-walled hyalinized arterioles and venules with a fibrotic collagenous cortex (Fajardo and Berthrong 1978; Cole 1964; Fajardo 2001) (Fig. 4a).
Some may consider the radiation response of the ovary to be paradoxical in that the radiation dose needed to produce sterility is higher for children (>2000 cGy) than for adults (≤600 cGy) (for many other endpoints children are more sensitive to the effects of radiation than are adults). The adult approaching menopause requires a smaller dose with age because the total number of oogonia is progressively reduced. The ovum germ cells epithelium the oogonia cease after birth and ovaries contain a limited number (0.5 × 10) which progressively reduce with time after the onset of puberty. The number of oogonia decreases monthly with the onset of ovulation and sex activity. In ovogenesis, the proliferating oogonia found in fetal life are very radiosensitive as vegetative and differentiating intermitotic cells. Once oogonia undergo meiosis, these secondary oocytes are relatively radioresistant. With the onset of menopause, involution occurs (Halperin et al. 2010).

Radiation therapy delivered to the uterus can result in loss of the ability to achieve or sustain pregnancy, but the uterus is not generally a dose-limiting structure for the treatment of gynecologic cancer. Microscopically, after irradiation of the uterus, mild cell and stroma atrophy, occasional atypia, and rare nuclear fragmentation may be observed. Regions of the endometrium that are in direct contact with intracavitary sources may develop late changes such as ulceration and fibrinopurulent necrosis. In endometrial gland cells that have received high doses of radiation, histologic changes include pseudopapillary hyperplasia, microcystic degeneration, nuclear atypia, and vacuolar degeneration. Muscle cells within the myometrium may be swollen, granular, and pale; dense collagen scar with atypical fibroblasts and rare glands with atypical nuclei will be found in these areas after healing (Fajardo 2001). In young women who have received uterine irradiation, the uterus will appear similar to a postmenopausal uterus: grossly shrunken, with an atrophic endometrium and cervix. In the long term, the uterus will become shrunken and firm, and the cervix becomes atrophic, especially in older women or women treated to a higher dose. Histologically, the endometrium may exhibit atypical hyperplasia with hyaline sclerosis in endometrial stroma (Figure 4b). The cervix develops atypia in squamous epithelia with hyaline fibrosis of the submucosa after radiation (Figure 4c).

In radiation therapy for primary cervical or vaginal cancers, the vaginal mucosa is frequently treated to high doses. Early changes after irradiation include endothelial cell injury in the lamina propria and adventitia with edema and smooth muscle necrosis. Longer term changes include extensive fibrosis with loss of muscle and elastic tissue in high-dose areas. Stenosis and vaginal shortening may occur. Fistulas to the urethra, rectum, and bladder develop rarely (Abitbol and Davenport 1974; Perez et al. 1988).

When the vulva is irradiated, erythema, and edema occur during radiation therapy and in the weeks that follow. Dry desquamation may develop owing to loss of the cells in the germinal basal layer of the epidermis. Moist desquamation then develops as a result of progressive edema and an inflammatory cell response. Death of basal epithelial cells and damage to endothelial cells with microvascular occlusions may lead to ischemia and necrosis. Long-term changes after irradiation include loss of vulvar hair; loss of pigmentation; indurated fibrosis and edema; and atrophy of glands, resulting in dryness.