A newborn presents with respiratory distress and fluid return from the nose and mouth following the first few attempts at swallowing. The abdomen is noted to appear small. Attempts at placing a nasogastric tube failed, and the patient is sent for chest and abdominal radiographs. What should be done for this neonate? 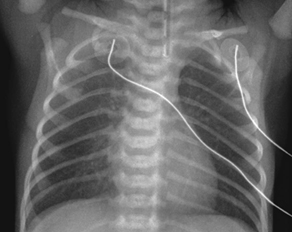 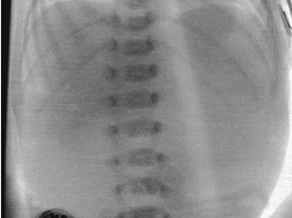 Neonates with esophageal atresia may require a gastrostomy tube prior to definitive repair. Traditionally, the tube has been inserted via an open surgical approach. Recently, less invasive techniques for gastrostomy tube insertion, including the percutaneous image-guided gastrostomy, has been used in the pediatric population. The main advantage of this technique is the avoidance of a laparotomy.

In patients with esophageal atresia without TEF, percutaneous gastrostomy tube insertion is problematic. The stomach is small and gasless, and it cannot be inflated as is usually done with a nasogastric tube. Access to the abdomen under radiologic guidance is therefore risky. A novel transhepatic approach is used to instill air into the stomach, which can then permit percutaneous gastrostomy tube insertion under fluoroscopic guidance.