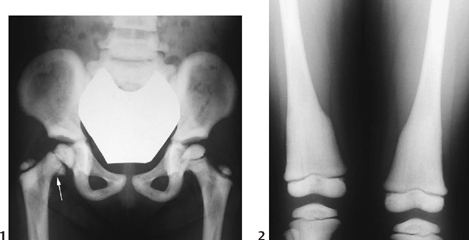 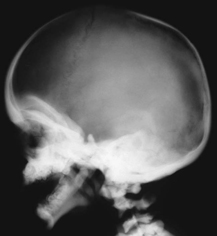 The frontal radiograph of the pelvis and femurs demonstrates a fracture of the proximal right femoral metaphysis (Fig. 116A1, arrow). There is underlying diffuse increased bone density and “Erlenmeyer flask” deformity of the distal femoral metaphyses (Fig. 116A2). The lateral x-ray of the skull shows diffuse thickening and increased density which is most marked at the skull base (Fig. 116B).

Osteopetrosis is a genetic disorder, which is characterized by generalized increased density of the bones. Osteopetrosis is commonly classified into three types by age of presentation. The infantile malignant autosomal recessive form presents as severe anemia with failure to thrive, and it is fatal within the first few years of life in the absence of effective treatment, that is, bone marrow transplant. The intermediate autosomal recessive form is milder, and it appears in the first decade of life. Clinical findings include short stature, anemia, and hepatomegaly. The adult benign autosomal dominant form is usually asymptomatic with full life expectancy and may have orthopedic complications such as fractures and osteomyelitis.

Osteopetrosis is a sclerosing bone dysplasia due to failure of bone resorption as a consequence of dysfunctional osteoclasts. The osteoclasts do not respond normally to parathyroid hormone, and resorption of endochondral cartilage is markedly diminished, whereas bone formation occurs at a normal rate.