A child presents following a motor vehicle accident (MVA). She was a backseat passenger. 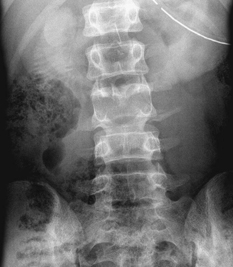 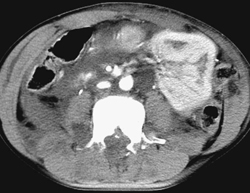 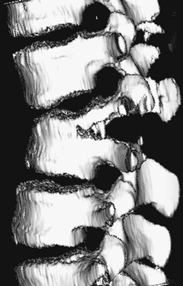 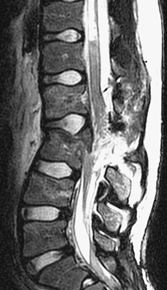 The AP lumbar spine film (Fig. 16A) demonstrates an “empty vertebral body” due to the lack of a spinous process projecting over the vertebral body, and the diastatic fracture traversing both pedicles. The CT findings (Fig. 16B) show fluid in the abdomen, thickened bowel wall, and abnormal mesentery. There is blurring of the paraspinal muscle-fat planes by contusion and edema and “absent” (because dislocated) vertebral neural arch. CT surface rendering of the spine (Fig. 16C) shows anterior angulation of the spine centered on L3, and horizontal splitting of the vertebral body and bilateral diastasis of the pedicles. MRI sagittal T2-weighted image (Fig. 16D) demonstrates malformation of the cord with a low conus projecting at the L4-L5 level, laceration of the cord facing the vertebral transverse fracture, and probable laceration of the dura as well. There is rupture of the posterior elements (spinous process, interspinous ligament). There is another severe lesion of the cord (high T2 signal) located above the fracture (T12-L10), likely generated by a traction and avulsion of the cord trapped at the level of the fracture.

The combination of vertebral body wedge compression, facet subluxation and/or disruption, and anterior displacement of the spinal segment above the dislocation were described by G.Q. Chance, a British radiologist, in 1948. The association with lap-belt injury was noted later. Lap belts or 2-point lap restraints, are considered obsolete; however, they are still common for the middle passenger in the back seat. Similar injuries may result from a child wearing a 3-point restraint incorrectly as a 2-point restraint, or an unrestrained passenger being thrown over the front seat.

Lap-belt restraints are associated with a variety of injuries in children, mainly bowel and upper lumbar spine, bur vascular injuries also occur. Two-point restraint seat belts tend to slip cephalad over the intended position across the anterior-superior iliac spines. The injury occurs as a result of flexion-distraction forces with the fulcrum centered in the anterior abdominal wall at the site of seat-belt contact. During deceleration MVAs, the fulcrum of flexion is moved to the anterior abdominal wall, resulting in distraction forces on the spine at the thoracolumbar junction.