A 3-week-old girl presents with a newly noted neck mass. 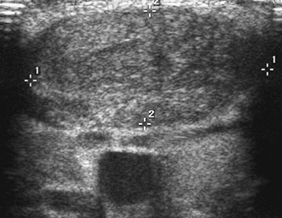 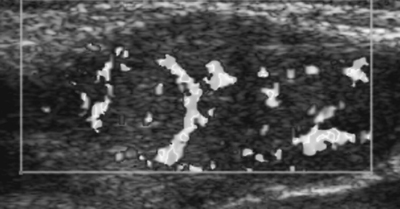 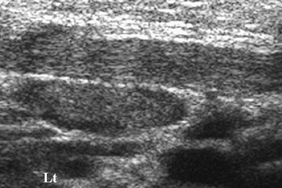 Longitudinal and transverse ultrasonographic images of the neck (Figs. 25A, 25B, 25C, and 25D) show diffuse fusiform enlargement of the right sternocleidomastoid muscle (SCM). There is increased slightly heterogeneous echogenicity of the right SCM, especially within its mid portion, as shown on the transverse image (Fig. 25B). Color Doppler longitudinal section shows increased flow within the right SCM (Fig. 25C). No abnormality is noted on the left (Fig. 25D).

It is important to recognize the clinical and imaging features of fibromatosis colli to avoid unnecessary biopsy or undue concern. Fibromatosis colli, often associated with birth trauma or difficult delivery, is an uncommon benign form of infantile fibromatosis with masslike enlargement of the SCM. It is seen in ~0.4% of newborns and infants, affecting male infants slightly more often than female infants. Fibromatosis colli is more commonly encountered on the right compared with the left and is rarely bilaterally. Most cases show no abnormality at birth. Frequently, the disease manifests in the late neonatal period and usually spontaneously disappears by 8 months of age. It is characterized by a firm, painless soft tissue mass in the mid to lower third of the SCM. Normal SCM has two muscular heads, which insert separately onto the sternum and clavicle. Fibromatosis colli frequently involves the distal aspect of the SCM but can also be encountered anywhere in its length and may involve either the sternal head alone or both heads. Following initial discovery, there may be a slight increase in size of the mass; however, the mass usually resolves over the next several months. Torticollis may present in 10 to 20% of cases and usually develops after the appearance of sternocleidomastoid mass.

Although the exact cause is unclear, in some cases fibromatosis colli is likely related to birth trauma associated with a difficult or forceps delivery, as this may be noted in up to 50% of cases. The mechanism of injury to the muscle may be localized crushing and ischemia. Intrauterre necrosis of the SCM and also to lead to the development of fibromatosis colli.