A 45-year-old male presented to interventional radiology for chemoem-bolization to treat hepatocellular carcinoma involving the right lobe of the liver. 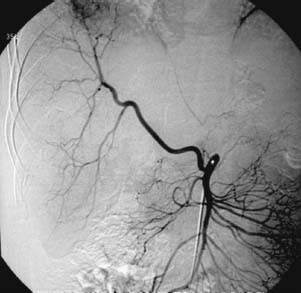 The right common femoral artery was punctured using the Seldinger technique, and a 5-French (F) sheath was inserted. The celiac artery was catheterized using an RC-1 (Boston Scientific, Natick, Massachusetts), and angiography was performed showing absence of flow to the right lobe of the liver. Subsequently, the superior mesenteric artery (SMA) was catheterized, and angiography showed a replaced right hepatic artery originating from the SMA and supplying the tumor (Fig. 30-1).

Using a 3F microcatheter, the subsegmental arteries supplying the hepatocellular carcinoma were superselected. Chemoembolization was performed by first injecting a mixture of doxorubicin and Ethiodol, followed by cisplatin and mitomycin.