A 58-year-old female who had lost 20 pounds over the past year presented with complaints of abdominal pain after eating and “food fear.”

Figure 23-1 Noninvasive evaluation of superior mesenteric stenosis. (A) Doppler ultrasound of SMA reveals an elevated velocity of 233 cm/s. (B) CTA shows high-grade stenoses of both the celiac and SMA.

An abdominal ultrasound was performed. Doppler interrogation of the superior mesenteric artery (SMA) revealed a velocity of 233 cm/s (Fig. 23-1A).

CTA showed high-grade stenoses of both the celiac artery and the SMA (Fig. 23-1B).

The right common femoral artery was catheterized using the Seldinger technique, and a 6-French (F) Balkan sheath was placed. A pigtail catheter was advanced into the abdominal aorta and lateral aortography was performed showing moderate-to-high grade stenoses of both the superior mesenteric and celiac arteries (Fig. 23-2A). 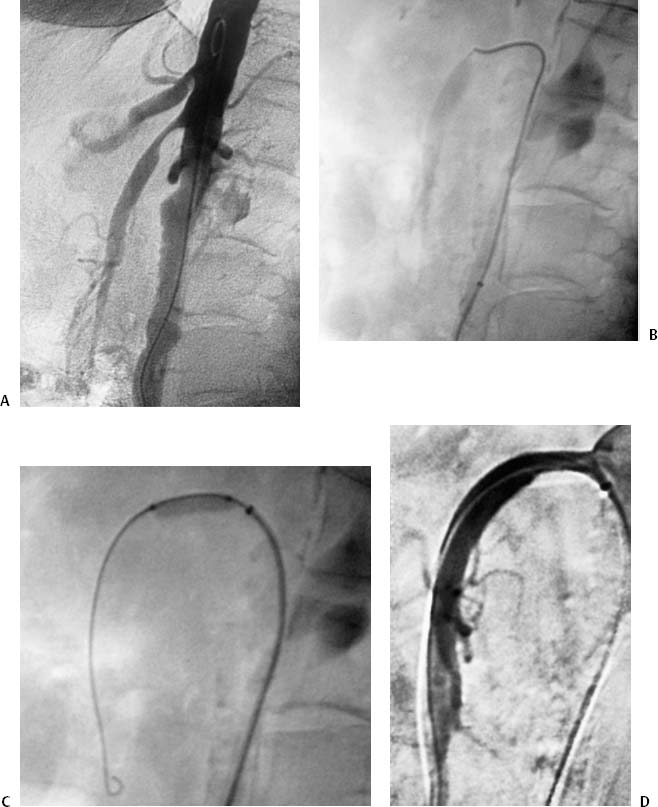 Celiac and SMA stenoses with symptoms of chronic mesenteric ischemia.