A 31-year-old minor league pitcher with a history of intermittent left-arm tenderness and swelling presented to the emergency room with an acute episode of marked pain and swelling after a game. 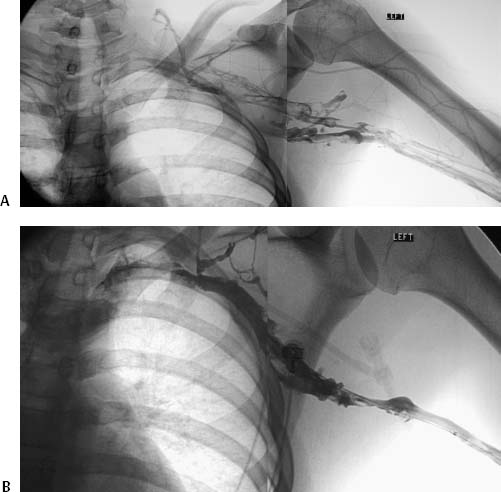 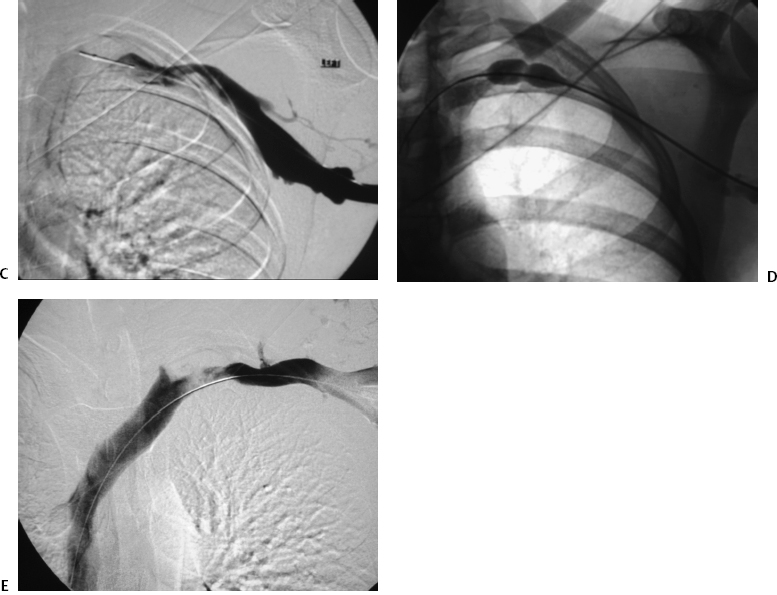 A left-arm venogram (Fig. 16-1A) performed by contrast injection through a left-hand intravenous (IV) line showed thrombosis of the left brachial, axillary, and subclavian veins with minimal development of collateral circulation.

The ipsilateral basilic vein was punctured using direct sonographic guidance, and the occluded axillary and subclavian veins were traversed using a hydrophilic glide wire. A multiside-hole catheter was passed into the clot. Thrombolysis was performed overnight using recombinant tissue plasminogen activator (rTPA), infused at a rate of 0.5 mg/h with heparin infusing through a peripheral IV at 200 U/h. A repeat venogram performed after 4 hours of rTPA infusion (Fig. 16-1B) showed partial thrombolysis, and infusion was continued overnight. The patient reported progressive improvement of arm swelling overnight, and complete thrombolysis was achieved over 27 hours (Fig. 16-1C). At this time, complete occlusion was present at the level of the thoracic inlet with the arm in the neutral position, and angioplasty was performed to a diameter of 12 mm to bridge the gap to surgical intervention. Patency with persistent stenosis was achieved at the thoracic inlet (Fig. 16-1E). One week later, the patient underwent successful first rib resection and release of the anterior scalene muscle. Two years later, he is symptom-free and pitching again.

PSS describes central venous thrombosis, typically involving the axillary and subclavian veins (Fig. 16-1). This syndrome affects young patients (mean age, early to mid thirties), and has a slight male predominance (55%). The underlying cause is venous compression at the level of the thoracic inlet. The finding of venous compression without associated thrombosis has often been called thoracic inlet syndrome (Fig. 16-2