A 10-month-old child presents to the emergency department with intermittent episodes of drawing his legs up to his chest and inconsolable crying. 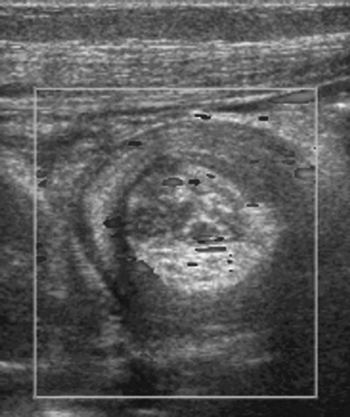 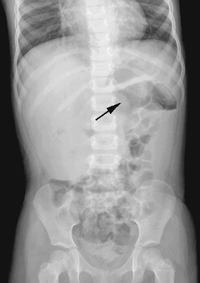 Figure 59B Supine abdominal x-ray shows a large soft tissue mass in the right flank with air in the transverse colon outlining the leading edge of the intussusception, the “crescent sign” (arrow).

Intussusception is the invagination of a segment of bowel (the intussusceptum) into the contiguous segment (the intussuscipiens). The vast majority of symptomatic cases (90%) involve the ileocolic segment, but ileo-ileal, ileo-ileocolic, and colocolic intussusception may also occur. Peak age incidence is between 4 months and 2 years of age, but patients outside of this range are not infrequently encountered. Boys are more frequently affected than girls.

The majority of cases are associated with inflammation and enlargement of the lymphoid tissue of Peyer’s patches following a viral gastroenteritis. In a small number (5%) there is a pathologic lead point, such as a Meckel’s diverticulum, duplication cyst, polyp, or, uncommonly, non-Hodgkin’s lymphoma.

The classic clinical triad is of episodic abdominal pain associated with the passage of blood and mucus per rectum (“red currant jelly”) and a palpable abdominal mass. However, this is present in <50% of children. Vomiting is relatively frequent, as is lethargy, which can be the major presenting feature. Considerable fluid shifts can result in hemodynamic instability. Advanced disease with established bowel ischemia or perforation presents with peritonism and shock.

Figure 59C Fluoroscopy images prior to air insufflation (1) demonstrating the soft tissue mass of the intussusception in the right lower quadrant and (2) following successful reduction with resolution of the mass and flooding of the small bowel with air.