A 65-year-old diabetic female had a nonhealing ulcer on the right foot. She had a long history of peripheral arterial occlusive disease. Her ankle-brachial index was 0.45. She reported relief of pain with dependency. Doppler exam revealed a high-grade focal stenosis of the right superficial femoral artery. She was referred for runoff angiography with possible angioplasty. 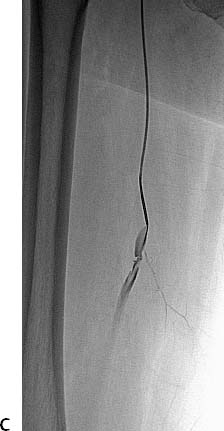 The left common femoral artery was catheterized using the Seldinger technique and a 6-French (F) sheath was inserted. A pigtail catheter was advanced into the abdominal aorta and diagnostic angiography of the pelvis and legs was performed, revealing no significant inflow disease and a high-grade stenosis of the right superficial femoral artery (Figs. 66-1A, B). The right common femoral artery was catheterized over the bifurcation, and selective angiography was performed, showing the lesion to better advantage (Fig. 66-1C). Small-vessel arterial disease was also uncovered in the right calf (not shown).

Five thousand units of heparin were administered intra-arterially. Nitroglycerine in 200 μg aliquots were given intra-arterially throughout the procedure to minimize vasospasm. The 6F sheath was advanced over the bifurcation into the contralateral common iliac artery to provide additional mechanical advantage. A catheter was advanced into the superficial femoral artery, and selective angiography was performed (Fig. 66-2A). The lesion was crossed with a 0.035-inch Bentson guidewire (Coola, Bloomington, Indiana and 5F MPA catheter). Injection via the sheath (not shown) after crossing both lesions revealed that the catheter was nearly occlusive to flow. The Bentson wire was then exchanged for a 260-cm 0.035-inch Rosen guidewire and a 5- × 20-mm cryoplasty balloon catheter (PolarCath; Boston Scientific, Natick, Massachusetts) was advanced to the site of stenosis (Fig. 66-2B). The lesion was cold dilated twice using the device (Fig. 66-2C). The catheter was then removed leaving the guidewire across the lesion. An angiogram performed via the 6F sheath showed marked improvement with minimal residual stenosis (Fig. 66-2D). 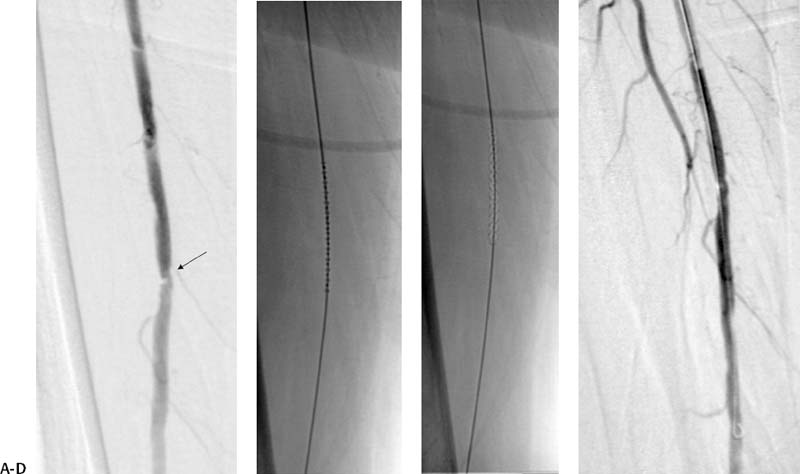