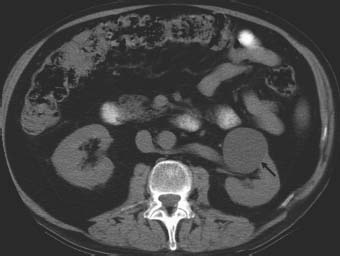 Figure 68-1 Noncontrast-enhanced CT image of the abdomen shows a cyst (arrow) located in the lower pole of the left kidney.

Figure 68-2 (A) T1-weighted and (B) T2-weighted MR images show the cyst (solid arrow) with mass effect on the left renal vein (dashed arrow).

A noncontrast CT performed to evaluate for ureteral stones showed a large cyst in the left kidney (Fig. 68-1). Further work-up included an MRI scan (Fig. 68-2) that showed mass effect by the cyst on the left renal vein and an ultrasound confirming the presence of a simple cyst (Fig. 68-3). 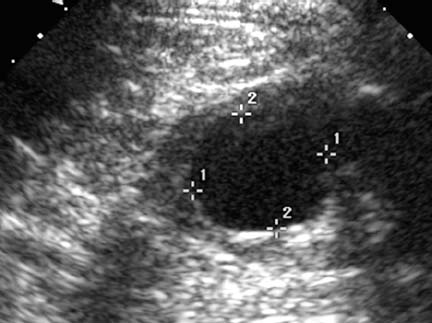 Figure 68-3 Ultrasound image obtained during aspiration and sclerosis again shows the cyst in the lower pole of the kidney.

Using the Seldinger technique under ultrasound guidance, the cyst was percutaneously punctured using a Micropuncture system (Cook. Bloomington, Indiana) and accessed with an 8-French (F) multiside hole catheter. Aspiration yielded 80 cc of serous fluid. We injected 20-40 cc of 95% ethanol solution, and the catheter was capped for 40 minutes while the patient’s vital signs were monitored. During this period, he was instructed to roll from side to side, intermittently. The catheter was uncapped and aspiration was performed until the cyst was completely collapsed by ultrasound imaging. The catheter was removed, the patient reported immediate improvement in symptoms, and after a short observation period, he was discharged home. At the 3-month follow-up, the patient was asymptomatic, and ultrasound showed resolution of the left renal cyst (Fig. 68-4).

Simple cysts in the abdomen can be classified as true cysts or pseudocysts, and congenital or acquired. True cysts are lined with an epithelial layer, whereas pseudocysts are not. Congenital cysts are sporadic or occur as part of a constellation of syndromes such as polycystic kidney disease. Congenital cysts can occur anywhere but commonly occur in the liver, kidneys, pancreas, and ovaries. Acquired cysts and cystic masses result from infection, trauma, noninfectious inflammatory processes, and surgery. Postsurgical cystic masses include hematomas, lymphoceles, seromas, urinomas, and bilomas.

Figure 68-4 (A) Longitudinal and (B) axial ultrasound images at the 3-month follow-up show resolution of the cyst.