A 48-year-old Caucasian female who had undergone total colectomy 10 years previously had over the past several months developed persistent intermittent bleeding from her ileostomy despite medical therapy. Work-up revealed cirrhosis of the liver and portal hypertension due to nonalcoholic steatohepatitis. The patient was referred for transjugular intrahepatic por-tosystemic shunt (TIPS) placement. A preprocedural CT showed portal vein thrombosis (Fig. 70-1). A TIPS was created after portal vein reconstruction using bare Wallstents (Boston Scientific, Natick, Massachusetts) (Fig. 70-2). In addition, a stomal varix was embolized with coils. The patient presented the day after shunt creation with stomal bleeding. 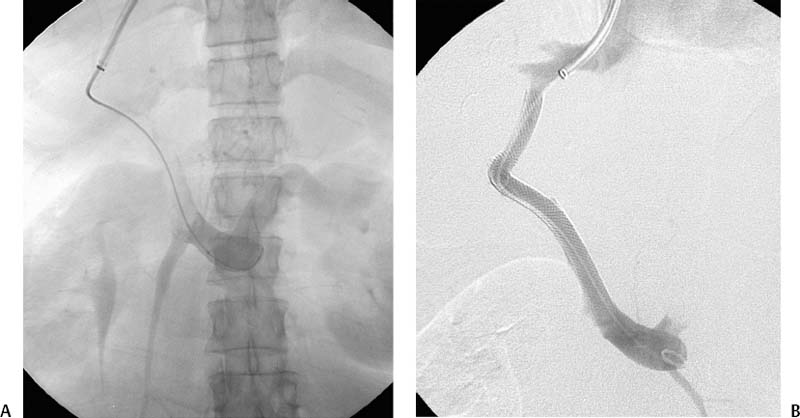 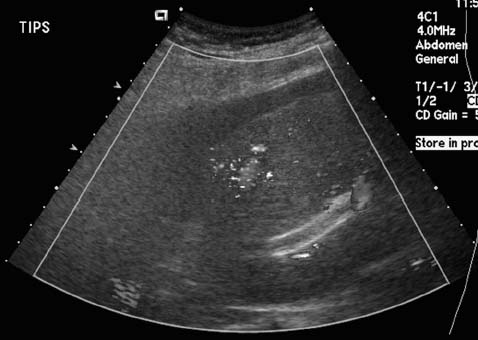 Access into the right internal jugular vein was performed using ultrasound guidance, and the right hepatic vein was selected using an MPA catheter (Boston Scientific, Natick, Massachusetts), which has an angled tip, and an angled glidewire (Boston Scientific). A hepatic venogram was performed to confirm position and assess patency of this vein. The shunt was selected with the catheter, and injection of contrast showed a connection between the TIPS shunt and the biliary tree (Fig. 70-4). 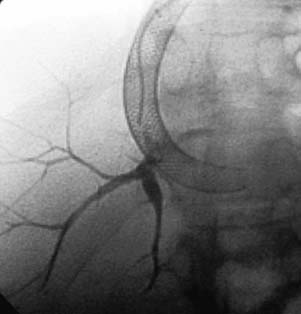 Figure 70-5 Stent graft revision. (A) Fluoroscopic image during balloon dilatation of the occluded TIPS shunt shows persistent contrast in a biliary radical (arrow) that appeared after contrast was injected within the thrombosed shunt, confirming a biliary-to-duct fistula. (B