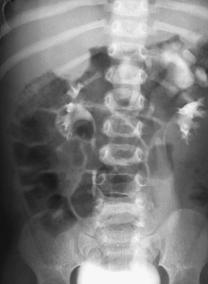 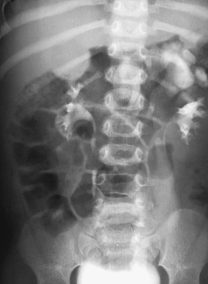 The intravenous urogram (IVU) 10 minutes (Fig. 73A) and 30 minutes (Fig. 73B) after contrast administration shows a normal right kidney and a duplicated left collecting system. The lower pole of the left kidney appears normal with no obvious scarring. There is dilatation of the upper moiety of the left kidney with delayed excretion of contrast into a dilated tortuous ureter draining the upper pole, which terminates as a filling defect in the left side of the bladder; that represents a ureterocele.

Duplex left kidney with delayed excretion of contrast by the upper moiety, and a dilated upper moiety ureter ending in a ureterocele

Ureteroceles are congenital cystic dilatations of the distal ureter. A ureterocele is termed simple when it inserts normally into the bladder and ectopic when the orifice is away from the normal ureterovesical junction (UVJ) in the bladder trigone. Duplication of a collecting system may be partial or complete. In partial duplication, two ureters fuse at a variable level. With complete duplication, two renal pelves and two separate ureters drain the kidney and insert separately into the bladder. The lower pole collecting system inserts into the bladder at the normal site, although the intramural portion may be shorter than normal, and vesicoureteral reflux is commonly found in association. The upper pole ureter inserts in an ectopic position medial and inferior to the normal UVJ (Weigert-Meyer rule). The upper pole ureter may insert outside the bladder into the urethra or into the vagina in females: such ectopic drainage of the ureter is usually associated with dysplasia of the upper moiety. Ballooning of the submucosal aspect of the upper moiety distal ureter as it inserts into the bladder results in a ureterocele, which frequently causes partial or complete obstruction to drainage.