A child presents to the hospital with recurrent nausea and vomiting. Abdominal assessment leads to abdominal MRI and subsequent CNS evaluation. 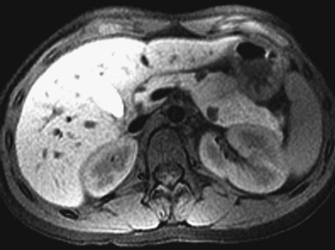 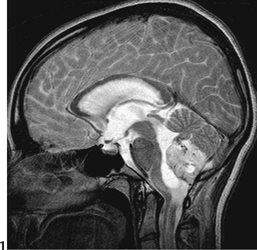 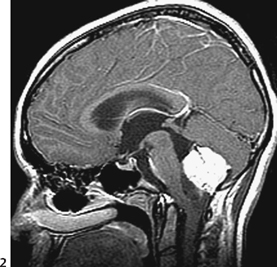 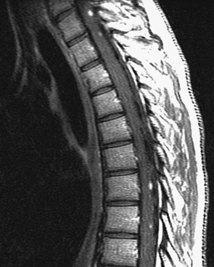 Fat-saturated axial T1-weighted image depicts multiple low T1 signal pancreatic cysts (Fig. 8A). This prompts the CNS assessment, which demonstrates on the sagittal T2-weighted image (Fig. 8B1) mild hydrocephalus and a hyperintense, well-demarcated mass of the lower vermis. A large anterior cyst obstructs the fourth ventricle, and multiple signal voids indicate high vascularity and fast flow.Contrast-enhanced sagittal T1-weighted image (Fig. 8B2) shows the marked homogeneous enhancement of a vascular tumor, specific for hemangioblastoma, and the anterior cyst. Note that the signal of the cyst is slightly different from that of the CSF on both T1- and T2-weighted sequences. Imaging of the spine (T1-weighted sagittal with contrast, Fig. 8C) completes the CNS investigation and demonstrates multiple, small hemangioblastoma nodules.

Pilocytic astrocytoma (cerebellum), but the patient is usually younger, and enhancement is less.

Von Hippel-Lindau (VHL) disease is a rare, autosomal dominant inherited cancer syndrome predisposing to a variety of malignant or benign neoplasms, more frequently retinal, cerebellar, and spinal hemangioblastoma; renal cell carcinoma (RCC); pheochromocytoma; and pancreatic tumors (OMIM, 1966–2005 Johns Hopkins University). Its incidence is low, ~1 of every 40,000 births. Its expression is variable but with a striking tendency for familial clustering of particular features. Both sexes are affected equally. The cause is a defective tumor suppressor gene VHL at chromosome 3p25-p26. Another defect on 11q13 is found in pheochromocytoma-associated VHL.

Posterior fossa hemangioblastomas are present in about half of patients with VHL. They may occur in the cerebellum or brain stem and are the second most common cause of initial symptoms. They often recur after surgical resection. Spinal cord hemangioblastomas were previously thought to be uncommon because they are usually asymptomatic in patients with VHL. However, spinal MRI shows that these lesions are fairly common.

The onset of VHL is typically in adulthood (third or fourth decades), but symptoms occasionally appear in the first 2 decades. Early diagnoses often follow screening of affected families, as this allows timely detection of lesions requiring treatment. Diagnosis is usually established when either the cerebellar or retinal tumors are recognized (Table 8-1).