A 14-month-old boy presents with a palpable abdominal mass. 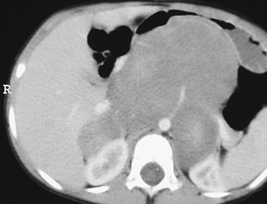 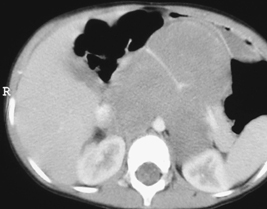 Two axial CT sections of the upper abdomen (Figs. 85A and 85B) show a large solid mass without calcification extending across the midline anterior to both kidneys. The aorta is encased by tumor, and the celiac artery is also encased and stretched by the mass. The bowel and tail of the pancreas are displaced anteriorly, and no intraspinal extension of tumor is visible on these images.

Neuroblastoma is the most common solid, extracranial malignancy in children, accounting for up to ~12% of all childhood cancers. It is a neurogenic tumor that can occur anywhere along the paravertebral sympathetic chain. The median age at diagnosis is 2 years. Seventy-five percent of tumors arise in the abdomen, the majority from the adrenal medulla. The remaining abdominal masses arise in the sympathetic ganglia or in the pelvis. Pelvic neuroblastoma manifests as a presacral soft tissue mass with or without calcification. Intraspinal invasion and bone erosion are commonly seen with tumors arising from the sympathetic chain, although many masses are actually so large at diagnosis that their organ of origin is difficult to locate with any certainty. Common sites of metastatic spread include local and distant lymph nodes, cortical bone, bone marrow, and the liver. Increased urinary catecholamine metabolites (vanillylmandelic acid and homovanillic acid) are present in the majority of children >1 year of age. Unlike the usual stage 4 metastatic disease in slightly older children, stage 4S neuroblastoma occurs exclusively in the first year of life, and often undergoes spontaneous regression without treatment. (See page 409 for International Neuroblastoma Staging System.)

Most neuroblastoma presents as a palpable abdominal mass. Other clinical manifestations include skeletal pain, weight loss, anorexia, irritability, proptosis, periorbital ecchymoses (“raccoon eyes”), paraparesis, ataxia, or opsomyoclonus. Many of these symptoms and signs are due to metastatic spread of tumor, which is seen at presentation in up to two thirds of cases of abdominal neuroblastoma.