An infant presents with irritability and overlying bruising of one knee. 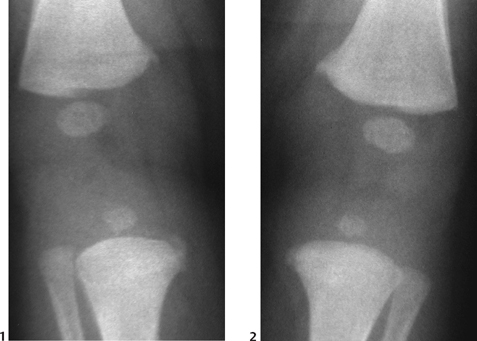 The frontal radiographs of the right (Fig. 94A1) and left (Fig. 94A2) knees demonstrate metaphyseal lesions classically described as “corner” and “bucket handle” fractures involving the distal metaphy-ses of the femurs and adjacent proximal tibial metaphyses. The overall bone density and configuration are normal.

Processes that predispose to fracture:

There are close to 1 million confirmed and >2.8 million estimated cases of child abuse in the United States each year. Risk factors identified for abuse are low-income socioeconomic status, children with disabilities, males, twins, stepchildren, and low birth weight/premature infants. It is estimated that ~2000 of these children will die from the inflicted injury, with infants representing 40% of the victims. One third of abused children will suffer fractures indistinguishable from the typical accidental injuries encountered in children. Fractures of higher specificity for abuse include the classic metaphyseal lesions (CMLs), posterior rib fractures, and sternal, scapular, and spinous process fractures in the infant.

Excessive shaking is often the mechanism of injury for both skeletal and cerebral trauma in these cases. Anterior-posterior compression/squeezing of the thorax, often during shaking of the infant, results in focal stress points to the posterior ribs where the tubercle articulates with the transverse process of the vertebral body. Further stress sites are present laterally and at the anterior rib end.

CMLs are thought to be the result of extensive torsional (twisting) and tractional (pulling) forces to the extremity causing disruption of the primary spongiosa of the metaphysis. These appear as either corner or bucket-handle fracture fragments on radiographs.

Abused children/infants can present to the family or emergency physician with a variety of complaints ranging from limp, lack of extremity motion, irritability, and failure to thrive to more ominous symptoms of altered mental status, seizures, coma, and death. A thorough search for bruising, burns, and retinal hemorrhages (due to shaking) is vital. Any findings must be viewed in context to the purported mechanism of injury. Often the findings of suspicious fractures or the presence of multiple fractures in varying stages of healing on radiographs raise the initial warning flag to alert the unsuspecting referring physician. 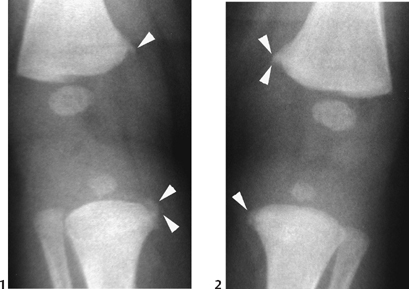