Definition: Congenital absence of the opening of the anus.

Associated malformations: These are found in 50%. Skeletal anomalies are associated in 30%, urogenital malformations in 38%, esophageal atresia in 10%, and cardiac anomalies in 5%.

Clinical management: Further sonographic screening, including fetal echocardiography. Karyotyping. Injection of contrast medium into the amniotic cavity followed by radiography of the fetus (amniofetography) have been performed in some cases historically.

Description: Offers support and encouragement for parents of children with tracheoesophageal fistula, esophageal atresia, and VATER. Aims to bring current information to parents and the medical community. Newsletter, information and referrals, phone support.

Definition: Ascites is defined as a collection of fluid within the peritoneal cavity.

Ultrasound findings: The abdominal scan shows fluid accumulation as an echo-free area in the abdominal cavity. This is usually a clear diagnosis. The greater omentum may often falsely be confused with a cystic lesion in the abdomen. If only a narrow rim of ascites is found, then it is difficult to differentiate from certain artefacts.

Clinical management: Further sonographic screening, including fetal echocardiography. It is important to differentiate between isolated fetal ascites and ascites as a part of a generalized fetal hydrops. Are pleural and pericardial effusions present? Can edema of the fetal skin be demonstrated? TORCH serology (prenatal infection?), possibly amniocentesis for further clarification (infection? chromosomal anomaly? cystic fibrosis?). 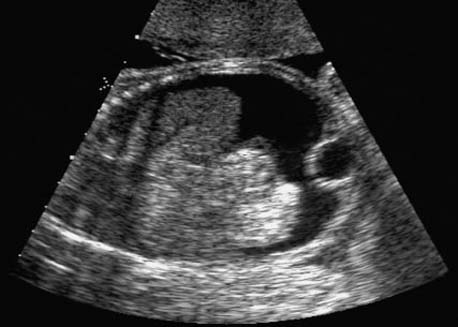 Fig. 6.1 Ascites. Severe isolated fetal ascites at 25 + 6 weeks. The liver, urinary bladder and bowel loops with echoes due to meconium peritonitis are seen floating within it.

Prognosis: Frequently no cause is found for isolated fetal ascites. Spontaneous remission may occur, with a very favorable prognosis.

Definition: Complete obliteration of the lumen of the duodenum.

Embryology: The lumen of the intestines is obliterated with epithelium in the 5 weeks after conception: this is a physiological finding. Up until 11 weeks of gestation, recanalization occurs. Duodenal atresia is caused by failure of recanalization.

Associated syndromes: Over 15 syndromes with duodenal atresia have been described. Up to a third of the cases have trisomy 21.

Ultrasound findings: “Double bubble” sign: the stomach is filled with fluid and next to it, the fluid-filled proximal duodenum can be seen as a second “bubble,” with the pylorus separating the two cavities. The distal bowel is devoid of fluid. Hydramnios frequently coexists, and this is first apparent after 24 weeks.

Clinical management: Further sonographic screening, including fetal echocardiography. Karyotyping. Vaginal scan (cervical finding): premature labor? If there is hydramnios with premature contractions and maternal abdominal discomfort, drainage of the hydramnios may be necessary.

Procedure after birth: Placement of a nasogastric tube and removal of gastric secretions. The amniotic fluid appears green, due to bile reflux. Aspiration is similar to meconium aspiration. Intubation rather than mask respiration of the infant is preferred to avoid overdistension of the stomach, which facilitates aspiration. Withholding of fluid and nutrients. Early surgical correction with a duodenoduodenal or duodenojejunal anastomosis. 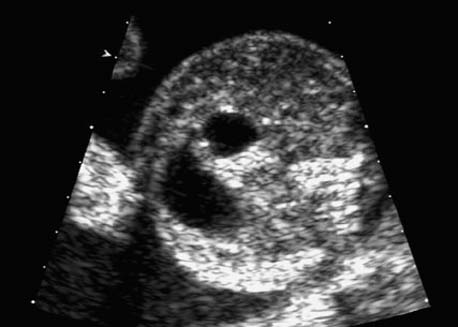 Fig. 6.2 Duodenal atresia. A cross-section of the fetus at the upper abdominal level at 27 weeks, showing two cystic lesions (“double bubble”) following duodenal atresia in a fetus with trisomy 21. 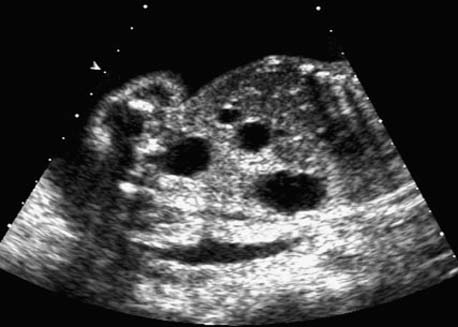 Fig. 6.3 Duodenal atresia. Same findings as above, in longitudinal section.

Prognosis: This depends on coexisting malformations and the maturity of the infant (premature labor due to hydramnios). Mortality can be as high as 36%. Surgical repair of isolated duodenal atresia is successful in almost all cases, with an overall survival rate of 95%.

Definition: Congenital atresia or stenosis of the small or large bowel.

Clinical history/genetics: Mostly sporadic. Autosomal-recessive syndromes have been described in association with intestinal atresia and stenosis. Cystic fibrosis is found in 25% of cases of jejunal and ileum atresia.

1. Bowel continuity is disturbed by a membrane consisting of mucous and submucous parts. The tunica muscularis is not involved.