Perinatal mortality is still three times higher in twin gestations than in singleton pregnancies. The reason for this appears to be a considerably higher incidence of premature birth, placental insufficiency, and congenital malformations in twins than in singleton pregnancies. According to the Hellin rule, the frequency of twin pregnancies is one in 85 pregnancies, that of triplets one in 852, and that of quadruplets one in 853. These data apply to Caucasian populations. The frequency of twin pregnancies varies considerably in relation to geography and ethnic origin. In Japan, there is one twin pregnancy to 155 singletons, about half of that expected in Caucasians. By contrast, there are regions of Nigeria in which one twin pregnancy occurs for 25 singletons—about three times higher than the rate predicted by Hellin.

This natural incidence of twin pregnancies has dramatically changed in recent years due to advances in fertility therapies. Twin pregnancies and multiple gestations are seen more frequently today due to follicle stimulation, ovulation treatments, and artificial insemination therapies. This primarily affects dizygotic twins. Monozygotic pregnancies arise from a single fertilized ovum that splits at various times during the first 2 weeks of embryogenesis. Depending on the stage of embryogenesis at which the zygote splits, four types of identical twins can result:

1. Dichorionic, diamniotic twins result from the division of the zygote within the first 3 days after fertilization. Each fetus has its own placenta and is surrounded by two layers—the chorion and amnion—and is thus separated from the other fetus by four layers. In the prenatal stage, these twins can not be differentiated from dizygotic twins if they are of the same sex. This applies to about 30% of monozygotic twin pregnancies.

2. Cellular division occurring between 3 and 8 days after fertilization results in monochorionic, diamniotic twins. Although there are two amniotic cavities, the placenta is shared by the two fetuses. The twins are separated by only two layers—the amnions of each twin. This constellation is present in about 70% of monozygotic twin pregnancies.

3. Monochorionic, monoamniotic twins occur with division between the 8th and 13th day after fertilization. The twins are not separated by membranes. This pattern constitutes about 1% of monozygotic pregnancies. It is associated with a high rate of intrauterine mortality of almost 50%, resulting from umbilical cord complications.

4. Conjoined twins are caused by incomplete division of the embryonic disk after day 13. The incidence is one in 70 000 completed pregnancies.

The chronic twin-to-twin transfusion syndrome, if untreated, results in high morbidity and mortality rates. The mortality can be as high as 90%, and diagnosis and management of this syndrome is therefore a challenge to modern prenatal and pediatric medicine. The morbidity associated with chronic TTTS is also high; one-third of the affected children show neurological damage at a later age.

The characteristic clinical features of chronic TTTS are: 1, disparity in fetal size, the recipient being larger than the donor; and 2, the amount of amniotic fluid differs considerably between the two amniotic cavities.

In the second half of pregnancy, fetal urine production is mainly responsible for the formation of amniotic fluid. In TTTS, the donor twin has a lower blood volume and fluid load comparedto the recipient twin. Thus, there is a reduction or complete absence of diuresis, leading to oligohydramnios or in severe cases to anhydramnios. In contrast to this, due to a higher volume load in the recipient twin, there is increased diuresis and thus development of hydramnios.

In addition, fetal hydrops develops in the recipient twin due to cardiac overload, causing ascites, skin edema, pleural effusion and pericardial effusion. In contrast to this, it is often difficult to detect the urinary bladder of the donor twin, due to the absence of diuresis.

It is important to differentiate TTTS from placental insufficiency in one of the twins. This also results in disparity of fetal size; the affected twin is smaller, and there may be oligohydramnios. However, the larger twin, does not show hydramnios, as long as other causative factors for the development of it are absent.

To calculate the risk of developing TTTS, it is of the utmost importance to know whether the twin pregnancy is monochorionic or dichorionic. TTTS is virtually unique to monochorionic twin gestations and almost never occurs in dichorionic gestations.

Early ultrasound examination in the first trimester provides the best opportunity to identify zygosity antenatally. This scan is included in routine antenatal screening in Germany. At this gestational age, the chorion is thick and surrounds the amniotic cavity completely, while the amnion is a very thin layer. The layer separating the two cavities is easily recognizable in dichorionic pregnancies, as it is at least 2–3 mm thick. In monochorionic gestations, this layer is detected as a very thin rim consisting of the two amnion membranes. After the first trimester, it is not easy to distinguish between the two forms of pregnancy, as the chorionic layer degenerates and does not appear as thick as in early pregnancy, so that even in dichorionic gestations the separation barely differs from that in monochorionic twins. At this stage of pregnancy, a search has to be made for the lambda sign (a lambda-shaped connection between the fetal membranes and placenta). However, the diagnosis cannot be made with certainty.

Monochorionic gestation can be diagnosed easily in the first part of the pregnancy; this is a spot diagnosis and can be detected even by less experienced sonographers if basic principles are followed. This means that it is possible to assess or exclude a risk of developing TTTS at an early stage.

The prognosis in TTTS is mostly very poor, and there are no standard treatment protocols. Premature delivery is opted for if the gestational age is adequate. After 28 weeks of gestation, this is almost always the preferred choice of treatment. For gestations below 28 weeks, four different therapeutic interventions are possible:

1. Repeated aspiration of amniotic fluid from the recipient twin every few days, to relieve the polyhydramnios. This reduces the risk of premature labor and/or intrauterine death and also improves placental perfusion by decreasing uterine pressure. This procedure makes it possible to reduce TTTS mortality by 50%. However, one-third of the survivors will still suffer late neurological damage.

2. Administration of digitalis to the mother and thus indirectly through the placenta to the fetus. The aim of this treatment is to prevent and treat cardiac failure in the recipient twin, which is struggling to cope with the volume overload.

3. As a last resort, selective fetocide of one twin, usually the donor, has also been tried, to improve the chances of survival of the second twin.

4. Endoscopic laser ablation of vascular shunts is now the most important treatment option, if available. In recent years, this method has been used in the treatment of severe TTTS. Its main disadvantage is the high rate of fetal demise, up to 50%. However, recent studies show that if successfully applied, late neurological complications occur in only 5% of surviving infants. 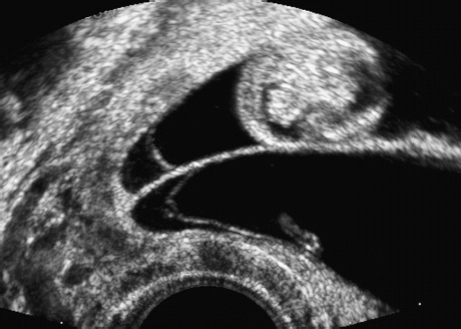 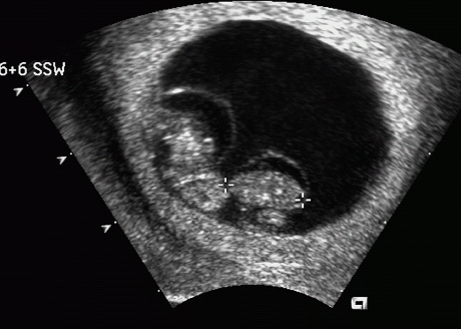 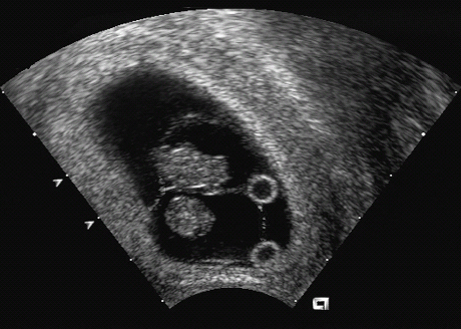 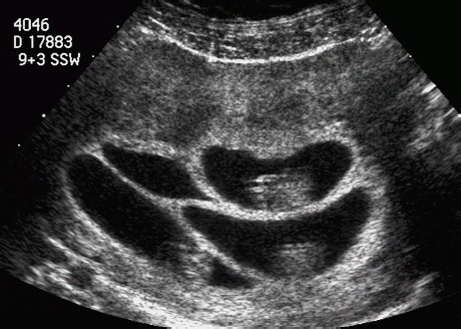 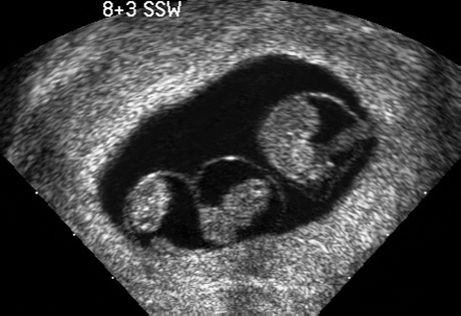 Fig. 15.5 Triplets. Triamniotic, monochorionic triplets at 8 + 3 weeks. There is a thin membrane (only amnion, with no chorion) separating the amniotic cavities.

From 16 weeks onwards, regular ultrasound assessment of fetal growth and amniotic fluid volume is necessary. Early warning signs of TTTS development can be detected in this way, and various therapy options can then be considered. It may even be necessary to hospitalize the mother.

To improve the prognosis of TTTS, continuous assessment during the whole of the pregnancy is advisable. The complications foreseen can be discussed with a pediatrician to ensure the best clinical management for the twins in this very precarious situation.

In summary, ultrasound examination in early pregnancy is a simple and reliable method of detecting zygosity and thus whether there is a high-risk pregnancy—allowing for risk-adjusted antenatal management of twin pregnancies.