The small bowel is grossly distended. The small bowel is recognised by the visible valvulae conniventes (arrowheads) passing across the width of the lumen. The central position of the loops is another clue
17.2 Sigmoid volvulus 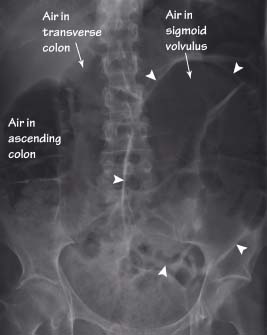 A sigmoid volvulus is seen as a doubled-up loop of bowel in the left iliac fossa forming the ‘coffee bean’ sign (arrowheads). The volvulus (twist) of the sigmoid colon is causing obstruction of the more proximal colon, which has become distended
17.3 Pneumoperitoneum: Rigler’s sign 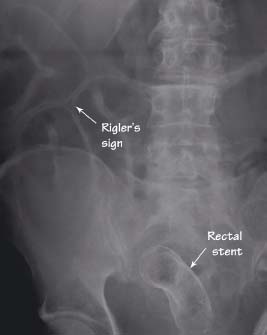 Free intraperitoneal gas can lead to the ‘double wall’ or ‘Rigler’s’ sign. This is due to the presence of gas/air on both sides of the bowel wall. This patient has a rectal stent in situ which was positioned to bridge an inoperable rectal cancer
17.4 Pneumoperitoneum: Erect CXR 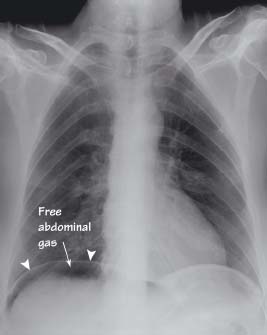 In a patient with an acute abdomen the erect CXR is a far more sensitive investigation than AXR for seeing free intraperitoneal gas. The diaphragm is seen as a thin line (arrowheads) and gas that accumulates underneath it forms a crescent shape

Obstruction of the bowel may be complete or incomplete, acute or chronic, and mechanical or non-mechanical (ileus). The causes include extramural (e.g. adhesions, herniae, volvulus and tumour), intramural (e.g. Crohn’s disease, tumours and strictures), and intraluminal pathology (e.g. faecal impaction, gallstone ileus and foreign bodies).

Bowel obstruction can be divided into two types, small and large bowel obstruction, due to the different locations and AXR appearances. The obstructing lesion is often not seen on the AXR but it is important to remember that the bowel proximal to it distends and the bowel distal collapses. The collapsed bowel will therefore not appear on the AXR but identifying this zone of transition will help locate the site of the obstruction. Distal obstructions consequently cause large bowel distension and if there is an incompetent ileocaecal valve, leakage of gas from the large into the small bowel, results in large and small bowel distension on the AXR.

The commonest cause of small bowel obstruction is postoperative adhesions

Tags: Radiology at a Glance
Mar 7, 2016 | Posted by admin in GENERAL RADIOLOGY | Comments Off on AXR classic cases I
Premium Wordpress Themes by UFO Themes
WordPress theme by UFO themes