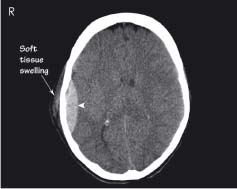 A lens-shaped area of high density is seen within the skull on the right (arrowhead). This is the typical appearance of an extradural haemorrhage which usually arises following injury to the middle meningeal artery. There was an underlying fracture of the temporal bone in this patient seen on bone window settings
39.2 Subdural haematoma (SDH): axial CT 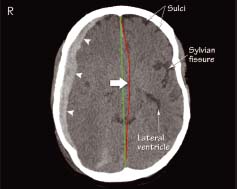 A crescentic rim of high-density material (acute blood) is seen over the surface of the right cerebral hemisphere (arrowheads). There is evidence of mass effect with effacement of the sulci, Sylvian fissure, and lateral ventricle (compare with left), with shift of midline structures (green to red line)
39.3 Subarachnoid haemorrhage (SAH): axial CT 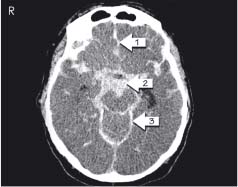 There is widespread high-density material (acute blood) within the subarachnoid space. The blood is seen in the interhemispheric fissure (1), the suprasellar cistern (2), and is layered over the tentorium cerebelli (3). The underlying cause was an aneurysm found on CT angiography
39.4 Intracerebral haemorrhage (ICH): axial CT 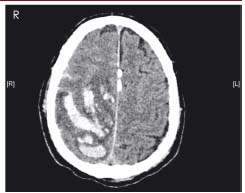 Areas of high density represent acute intracerebral haemorrhage of the right cerebral hemisphere. The high-density areas (blood) are surrounded by low-density areas (oedema). Mass effect is seen with loss of sulci on this side and slight midline shift
39.5 Cerebral infarction: axial CT 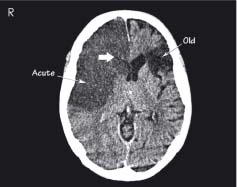 On the right there is a large low-density area indicating an acute infarction of the right middle cerebral artery (MCA) territory. This is causing mass effect with loss of sulci, effacement of the right lateral ventricle anterior horn (arrow) and some midline shift. For comparison an old low density infarct is seen on the left
39.6 Cerebral tumour: axial CT post-contrast 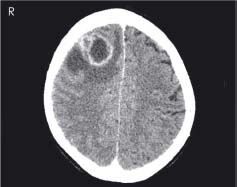 A peripherally enhancing lesion is seen in the right cerebral hemisphere. Note its central low-density area (necrosis) and the surrounding low density (oedema). Mass effect is seen with sulcal effacement on this side and slight deviation of the falx cerebri. Biopsy proved this to be a malignant tumour