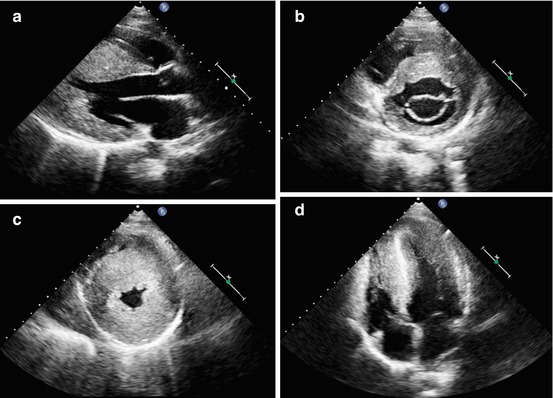 Hypertrophy severity varies, ranging from mild to very severe (wall thickness >30 mm) (Fig. 10.4, Clips 10.3a, 10.3b, 10.3c, 10.3d, and 10.3e). LV mass assessment, which is useful for hypertrophy quantification, is problematic and unreliable by traditional echocardiographic formulae based on M-mode due to the irregular distribution of hypertrophy [10]. Sometimes, the extent of hypertrophy is difficult to visualize; thus LV cavity opacification by intravenous administration of contrast material [11] or cardiac magnetic resonance (CMR) may be helpful. In particular, apical HCM and apical aneurysms can be missed on transthoracic echocardiography (TTE) [12, 13]. The HCM phenotype could be associated with accentuated trabeculations, sometimes in a continuum with LV noncompaction [14].

In the majority of patients with the classic form of HCM, LV systolic function is described to be normal or supranormal (Clips 10.1a, 10.1c, 10.1d, and 10.1e).
However, although LV ejection fraction (EF) is frequently seen as more than 70 %, significant hypertrophy hesitates in small LV end-diastolic volumes and cavity size, with abnormal filling and these features explain the reduced stroke volume [1]. A minority (5–10 %) of patients develop LV systolic dysfunction (end-stage phase with EF <50 %) (Fig. 10.5, Clips 10.4a and 10.4b) [15]. End-stage HCM seems to have a strong genetic background: Girolami et al. [16] showed that can be associated with multiple genetic mutations.

Diastolic dysfunction is the main and most frequent hemodynamic abnormality described in HCM. Its importance led to an extensive search for accurate, noninvasive methods of quantifying its severity. Doppler echocardiography allows assessment of diastolic dysfunction in HCM, even if conventional parameters, such as E-wave deceleration time and E/A ratio on transmitral flow, do not correlate well with LV filling pressure, as it does in other CMP, such as DCM [18]. Conversely, atrial reversal velocity from the pulmonary veins and its duration, recorded at pulsed-wave (PW) Doppler, significantly correlate with LV end-diastolic pressures [19]. A restrictive filling pattern can be present in a minority of patients and corresponds to severe diastolic dysfunction, as in other heart diseases (Fig. 10.5) [20].
Considering tissue Doppler imaging (TDI) assessment of diastolic dysfunction, previous studies noted reasonable correlations between E/E’ ratio and LV filling pressures in HCM [19]. However, the E/E’ ratio is poorly correlated with capillary wedge pressures measurements at catheterization [12, 13]. Therefore, it must be considered as unreliable as a single parameter for assessing LV diastolic dysfunction in patients with HCM.
Left-atrial (LA) volume can be useful as a surrogate for diastolic dysfunction, particularly in the absence of significant mitral regurgitation (MR) and atrial fibrillation (AF) [21].
In conclusion, as suggested by international guidelines on echo Doppler assessment of diastolic dysfunction [22], a comprehensive echocardiographic approach is recommended when predicting LV filling pressures in patients with HCM, taking into consideration transmitral Doppler and TDI velocities and ratios, as well as pulmonary vein flow pattern, pulmonary artery pressure, and LA volume.

HCM may be associated with a variety of intrinsic abnormalities of the mitral valve (MV), including anomalous mitral papillary muscles or chordae, direct papillary insertion into the mitral leaflets, MV prolapse, and chordal rupture. Furthermore, MV abnormalities may have a major role in generating LV obstruction [23]. Systolic anterior motion (SAM) of the anterior mitral leaflet—with or without a pressure gradient across the LV outflow tract (LVOT)—although not pathognomonic, is highly indicative of HCM (Fig. 10.6, Clips 10.5a and 10.5b) [24]. 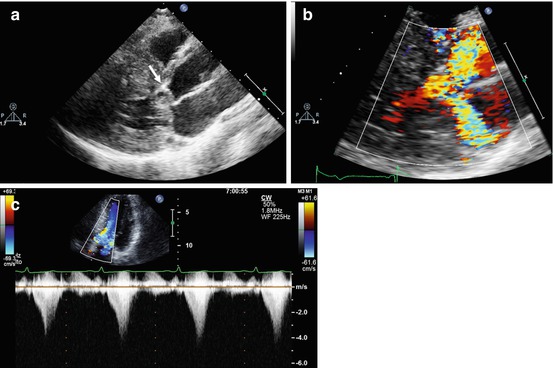 Doppler echocardiography in a patient with obstructive hypertrophic cardiomyopathy. Parasternal long-axis view, systolic frame (a), demonstrating systolic anterior motion of the anterior mitral leaflet (arrow). Color Doppler examination, systolic frame (b), shows marked turbulence in the left ventricular outflow tract and a posteriorly directed jet of mitral regurgitation. The continuous-wave Doppler image recorded through the left ventricular outflow tract (c) shows a late-peaking systolic gradient with peak pressure gradient of 64 mmHg at rest
The first study using cardiac ultrasound (US) to establish MV SAM was published in 1969 [25]. Even if subsequent advances in echocardiography substantially increased our comprehension of the processes underlying LV OT obstruction, the mechanism of SAM in HCM is not yet completely defined. SAM typically involves the anterior—and, less often—the posterior leaflet. Initially it was thought to be related to the Venturi effect and that raised flow velocities in a LVOT anatomically distorted by septal hypertrophy could pull the MV leaflets toward the septum, inducing a significant obstruction. The true mechanism is probably much more complex and involves the subvalvular apparatus and drag forces created by a hyperdynamic LV, which predispose the leaflets to being swept into the LVOT [26]. Studies using both transesophageal echocardiography (TEE) and CMR show that both mitral leaflets—in particular, the anterior—are longer than those of control individuals, which could be a factor predisposing to SAM [27].
MR and its severity are correlated with the degree of SAM and obstruction [28]. Grigg et al. [29], studying 32 HCM patients with intraoperative TEE during myectomy, found that in 56 %, neither MV leaflet coapted in midsystole secondary to severe SAM, leading to a jet originating from the gap between the two leaflets.
Considering papillary muscles, the currently described abnormalities are papillary muscle hypertrophy, papillary muscle fusion with IVS, anterior apically displaced papillary muscles, papillary muscle insertion directly in the anterior mitral leaflet, papillary muscle fusion with the LV free wall, double-bifid papillary muscles, and accessory papillary muscles [30, 31]. Even if echocardiography plays a major role in identifying these abnormalities, studies in patients undergoing septal myectomy show that they are frequently not identified by TTE and are often identified only during direct inspection at the time of operation [32]. Therefore, TEE and/or CMR are indicated in patients with HCM and severe MR who are potential candidates for surgery.
In clinical practice, MR jet direction at color Doppler examination is useful to predict its mechanism (posterolateral jet direction in SAM-related MR; anterior MV leaflet prolapse; anteromedial jet direction in MR due to posterior MV leaflet prolapse) (Fig. 10.6, Clip 10.5c).

A significant pressure gradient at rest or during exercise affects more than 70 % of the patients with HCM [33]. Doppler echocardiography plays a primary role in assessing patients with obstructive HCM. Using the simplified Bernoulli equation on continuous-wave Doppler signal from the LV—as in valvular heart diseases—it is possible to reliably estimate peak and mean intraventricular systolic pressure gradients. In addition, accurate echocardiographic examination provides important insights about mechanisms that generate LV obstruction, and color and PW Doppler mapping are highly useful for determining the obstruction site [34].
A LV gradient >30 mmHg at rest and >50 mmHg at stress is considered significant (Fig. 10.6) [4]. Midcavitary obstruction can occur with and without LVOT obstruction in ventricles with hyperdynamic function and concentric and/or apical hypertrophy (Fig. 10.7, Clips 10.6a and 10.6b) and is sometimes accompanied by an apical aneurysm [3]. 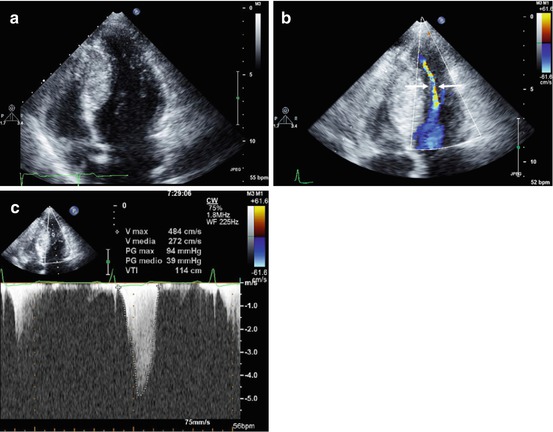 Although HCM is a disease known to affect mainly the LV, studies show involvement of the right ventricle (RV). RV abnormalities range from hypertrophy, systolic and diastolic dysfunction, RV systolic gradient, and consequences of secondary pulmonary hypertension [37].
Severino et al. demonstrated that in HCM, despite the absence of RV systolic dysfunction, the majority of patients show signs of abnormal RV filling patterns [38]. Finocchiaro et al. [39] show how RV dysfunction, based on the RV myocardial performance index, is common in HCM patients (with significantly higher values than a healthy control cohort: 0.51 ± 0.18 vs 0.25 ± 0.06, p < 0.001) and is more frequently observed in patients with LV dysfunction and pulmonary hypertension. RV hypertrophy and function can be better assessed by CMR [40] (Chap. 12).

10.8 Differential Diagnosis with Other Causes of Hypertrophy

It is important to remember that LV and/or RV hypertrophy cannot be considered pathognomonic of HCM. Secondary forms—for example, in the context of hypertension, infiltrative and storage CMP such as cardiac amyloidosis (CA) and Anderson-Fabry disease—may be very difficult to distinguish from HCM. This fact has generated some confusion also in terminology [41].
In some case, the degree and the distribution of hypertrophy may help in discriminating HCM from other forms of LV hypertrophy. For example, in CA, wall thickening is usually concentric; in Anderson-Fabry disease, the binary appearance at echocardiography of the LV endocardial border has been questioned as a possible characteristic [42], although not specific [43], feature.
Even if echocardiography could be helpful in the differential diagnosis with other causes of hypertrophy, its role must be considered in the context of the clinical picture and electrocardiography, possibly gathering information from genetics and histopathology. Furthermore, other imaging modalities, particularly CMR (Chap. 12) can be helpful in the differential diagnosis.

Because of the potentially adverse consequences of underlying cardiovascular disease in young athletes, considerable attention has focused on discriminating physiologically based athlete’s heart from various structural heart diseases. In particular, in athletes, it is important to rule out a disease that can potentially lead to sudden death (SD), such as HCM, and echocardiography plays a primary role in this setting [44].
Only gold members can continue reading. Log In or Register to continue