Fat cells may be actively involved in hematopoiesis, supplying metabolic or nutritional support, possibly along with growth factors [5]. The cellular composition of adult red marrow is 60 % hematopoietic cells and 40 % adipocytes, while its chemical composition is 40–60 % lipid, 30–40 % water, and 10–20 % proteins [6]. In contrast, yellow marrow is almost entirely composed of adipocytes (95 %), with its chemical composition being 80 % lipid, 15 % water, and 5 % protein [6–8]. In neonates and young infants, little or no marrow fat is present. Red marrow is significantly more cellular than yellow, with 100 % cellularity at birth; this decreases to 80–90 % in infancy and 60–80 % in young children [8]. Cancellous bone, composed of primary and secondary bridging trabeculae, provides the underlying structural framework for the cellular elements of marrow and also serves as a mineral depot [9].
The MRI signal of marrow reflects its cellular composition. Hematopoietic marrow is usually similar to or slightly more hyperintense than muscle on T1-weighted (T1-W) and T2-weighted (T2-W) sequences, although in neonates it can be slightly darker than muscle on T1-W images as a result of its relatively high cellularity [10, 11]. On T1-W sequences, yellow marrow is isointense to subcutaneous fat, whereas on T2-W images it appears similar to or slightly more hypointense than subcutaneous fat and slightly more hyperintense than muscle. This is discussed in greater detail below, in the section on MRI technique and the appearance of bone marrow.

The cellular composition of normal marrow changes significantly with age (Box 25.1). This is termed marrow conversion. Thorough understanding of the rate and anatomic pattern of marrow conversion has allowed for MRI mapping of the expected age-related distribution of marrow throughout the skeleton [8, 11–15]. At birth, hematopoietic marrow is present throughout the entire skeleton. Various regions of hematopoietic marrow then rapidly undergo conversion to fatty marrow. This begins in the periphery of the skeleton—first in the distal phalanges of the fingers and toes (Fig. 25.2) and then extending in a symmetric, centripetal manner into the more proximal skeleton [6, 16]. During the first decade, but especially during the first 5 years of life, the long bones undergo marrow conversion [17].

Normal rapid conversion from hematopoietic to fatty marrow in the peripheral appendicular skeleton. (a) Coronal T1-weighted (T1-W) hand in a neonate shows T1-hypointense hematopoietic marrow in the metacarpals. The epiphyses and carpal bones are cartilaginous and mildly hyperintense. (b) Coronal T1-W hand in a 1-year-old shows fatty conversion of the metacarpals and phalanges, which are now hyperintense, brighter than the cartilaginous portions of the epiphyses
Box 25.1: Conversion of Hematopoietic to Fatty Marrow

The epiphyses are the first areas to develop fatty marrow, as discussed below and in Chap. 2. Marrow conversion then occurs in the diaphysis and progresses to the distal and finally proximal metaphyses [6, 16] (Fig. 25.3). Slight early fatty conversion can result in subtle increased signal in the diaphysis as soon as age 3 months, and by 1 year of age, some degree of heterogeneity is routinely evident. By age 5 years, the femoral diaphysis is homogeneously hyperintense due to fatty conversion [17]. Persistence of significant hematopoietic marrow in the diaphysis after about age 10 is abnormal. 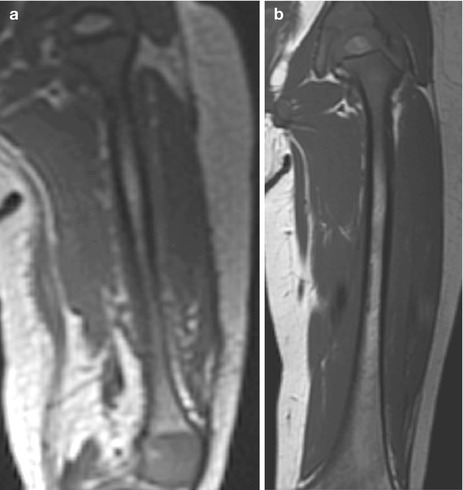 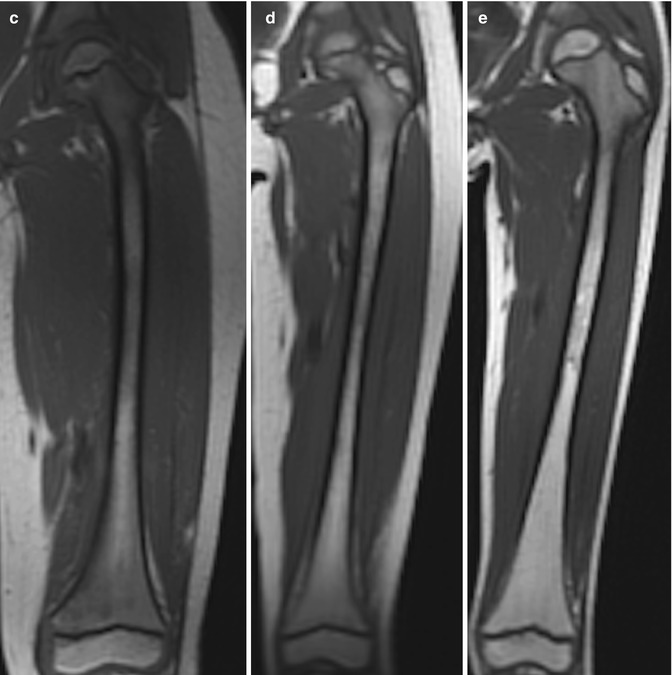 Normal marrow conversion in the femur on coronal T1-W images. (a) 1-year-old boy: the diaphysis has subtle hyperintensity, but the metadiaphysis is predominantly hypointense. The ossification center at the proximal femur is hyperintense due to fatty marrow (the distal femoral ossification center is almost entirely out of plane). (b) 4-year-old girl: heterogeneous hyperintensity is evident in the diaphysis and distal metaphysis. (c) 6-year-old boy: hyperintensity at the distal femur has increased. (d) 7-year-old girl: the distal femoral metaphysis is almost uniformly hyperintense, and the proximal metaphysis is becoming brighter. (e) 9-year-old boy: there is now heterogeneous hyperintensity at the proximal femoral metaphysis (Courtesy of Rebecca Stein-Wexler)
Cartilaginous epiphyses and apophyses lack marrow until they ossify. Once ossified, these centers initially contain hematopoietic marrow that is hypointense on T1-W and hyperintense on T2-W images. This is rapidly converted to fatty marrow within months of ossification (with resultant hyperintense signal on both T1- and T2-W images) (Fig. 25.4). In the mid- to late third decade of life, bone marrow distribution achieves its adult state [16], confined to the axial skeleton and proximal humeri and femurs. 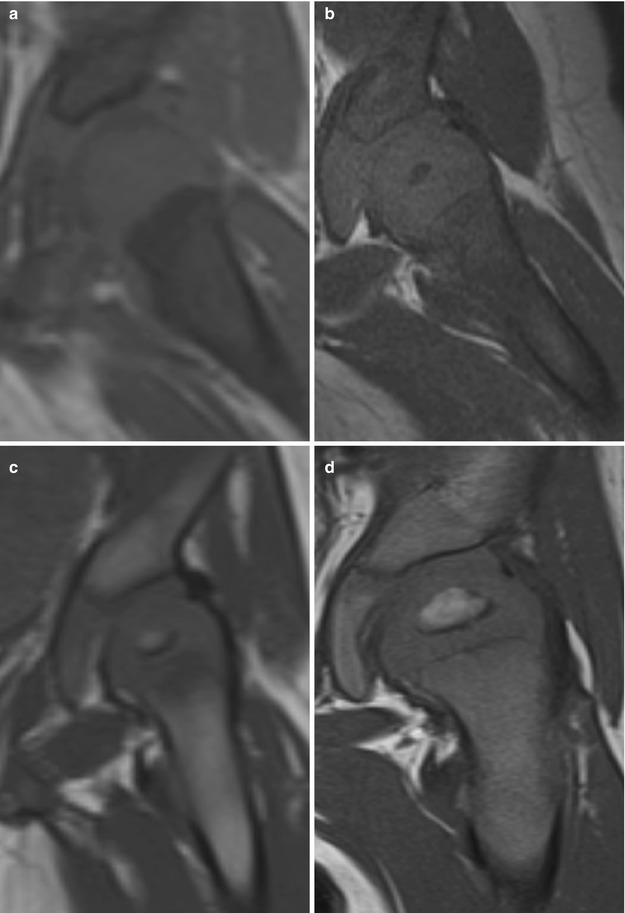 Changes in the appearance of the proximal femur on coronal T1-W images during early childhood. (a) The femoral head of this 3-month-old girl is uniformly isointense to muscle; there is no ossification center. (b) The femoral head of another 3-month-old girl is hypointense, with early ossification and formation of hypointense red marrow. In both a and b, the proximal femur is hypointense due to red marrow. (c) The femoral head in a 6-month-old girl is converting to fatty marrow, slightly hyperintense to muscle. (d) The femoral head in this 8-month-old boy is larger and demonstrates hyperintense fatty marrow (Courtesy of Tal Laor, Cincinnati Children’s Hospital)
Even though red marrow persists in the axial skeleton, it too undergoes conversion—though later and more gradually than in the appendicular skeleton (Fig. 25.5). For example, the amount of hematopoietic marrow in the vertebral bodies diminishes, with corresponding slight increase in fatty marrow. Before age 1 year, the vertebral body appears hypointense on T1-W images compared with the intervertebral disks. It then becomes isointense to the disks. After age 3–5 the vertebral body is mildly hyperintense compared with the disks, and this hyperintensity gradually increases [18, 19] (Box 25.1). 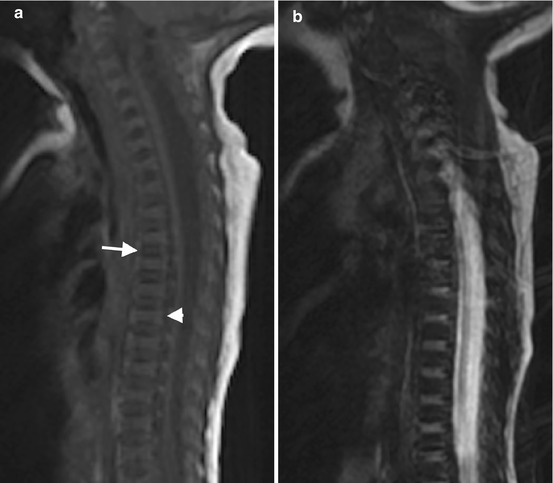 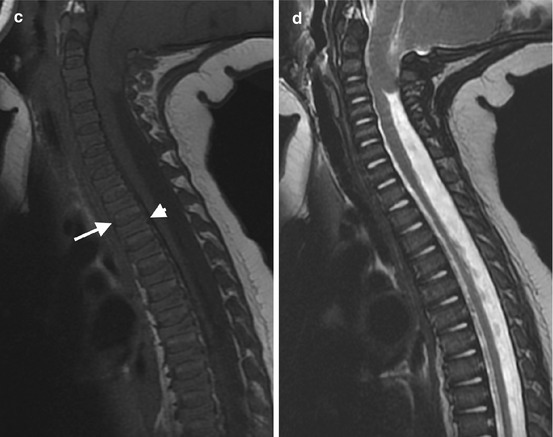 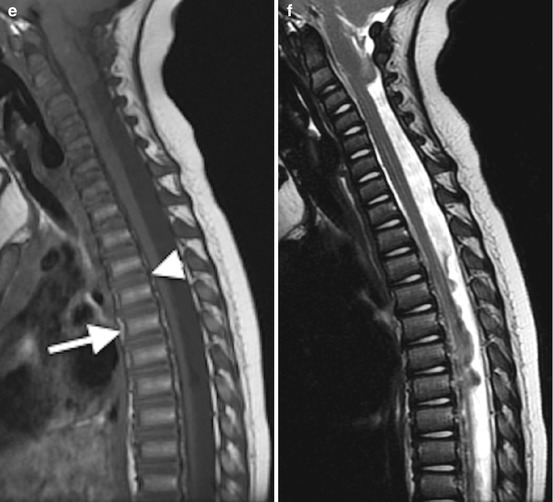 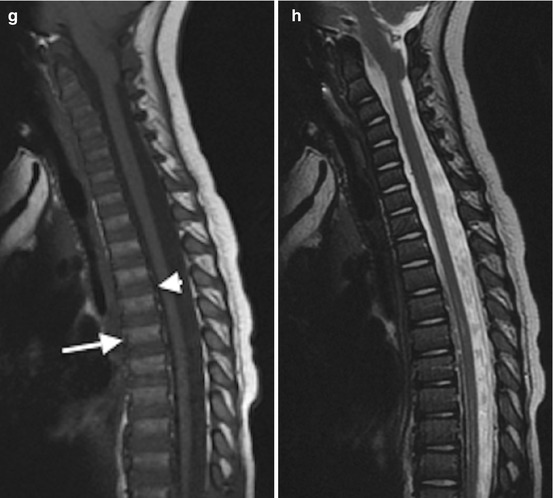 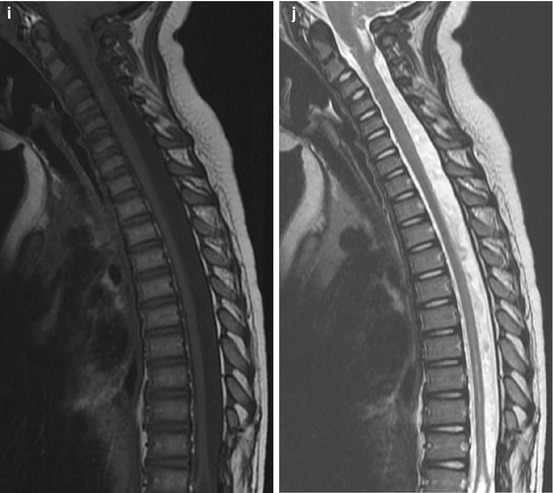 These are only general guidelines on marrow maturation, and variation and incomplete conversion are very common. For example, prominent hematopoietic marrow in the metaphyses is normal until the end of the second decade. In fact, the lack of red marrow in the proximal femoral metaphyses in the young child is abnormal and raises concern for myeloid depletion.
Heterogeneous, sharply demarcated linear areas or focal islands of red marrow are common normal variants (Fig. 25.6). Although they can be confused with marrow lesions, several features help to differentiate. Residual red marrow typically has a symmetric distribution and abuts or almost abuts the physis. It is flame shaped and often has vertical or feathery margins, with a central focus of fatty marrow (target sign). It does not disturb the trabeculae. Finally, residual marrow should be brighter than muscle on T1-W imaging and similar to marrow on short-tau inversion recovery (STIR) (Box 25.2). 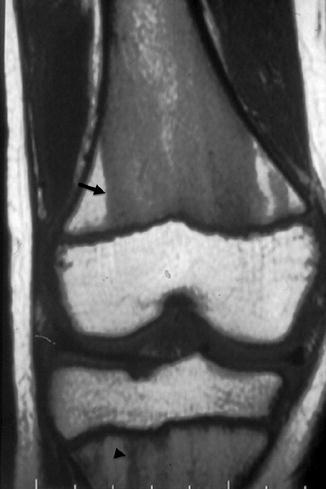 Prominent persistent hematopoietic marrow. Coronal T1-W image shows hypointense hematopoietic marrow that has the typical straight margins (arrow) and is brighter than muscle. At the proximal tibial metaphysis, residual hematopoietic marrow appears feathery and flame shaped (arrowhead)
Small foci of high-signal T2 changes of the bone marrow are common within the foot and ankle, wrist, and cervical spine in children up to the age of 15 years (Fig. 25.7). These may reflect residual regions of red marrow or possibly asymptomatic changes from subclinical trauma. Out-of-phase imaging may help differentiate hematopoietic marrow from metastasis. 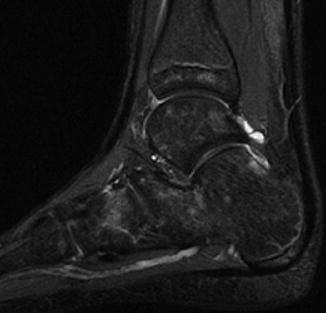 Normal hyperintense foci in tarsal bones of a 9-year-old. Sagittal inversion recovery (IR) image (Courtesy of Rebecca Stein-Wexler)
Prominent hematopoietic marrow can occasionally be normal in the subchondral regions of some epiphyses, most often in the distal femur, proximal tibia, and proximal humerus (Fig. 25.8). Although this is often interpreted as evidence of marrow reconversion, it likely represents residual hematopoietic marrow [20].

In the event of increased functional demand for hematopoiesis, yellow marrow may reconvert to red marrow. Conditions triggering reconversion include chronic hemolytic anemias (such as sickle-cell disease and thalassemia) (Fig. 25.9), physiologic stress, endurance running, obesity, extensive marrow replacement from marrow proliferative or replacement disorders, and chemotherapy with marrow-stimulating agents such as granulocyte colony-stimulating factor [12, 16] (Fig. 25.10). The extent of reconversion depends on the severity and duration of the stimulus. This reconversion process typically reverses the order of initial conversion, first in the central and then the peripheral skeleton, and in the long bones from the metaphyses to the diaphyses [6]. 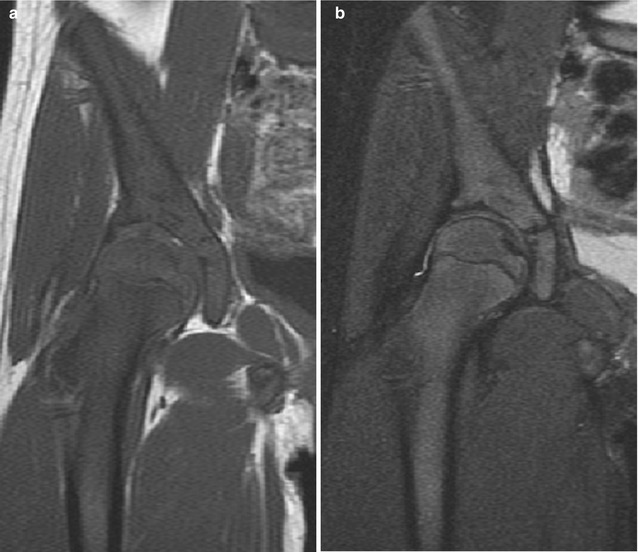 Marrow reconversion in a young adolescent girl with sickle-cell disease. (a) T1-W coronal image shows diffuse hypointensity throughout the marrow due to replacement of all expected fatty marrow with hematopoietic marrow. This is especially striking at the femoral head, which should be hyperintense. (b) T2-W FS image shows diffuse intermediate signal due to marrow reconversion

Marrow reconversion after therapy with granulocyte colony-stimulating factor in a child with osseous metastases in the proximal femurs due to rhabdomyosarcoma. (a) On T1-W coronal image, diffuse hypointensity in the femoral metaphysis results from combination of hematopoietic marrow and metastases. (b) On T2-W FS image, heterogeneous signal better delineates these two processes

MRI is the mainstay of clinical marrow evaluation. The MRI characteristics of bone marrow are influenced by a number of factors, including the choice of imaging sequence, use of contrast agents, marrow cellularity (especially its hematopoietic, lipid, and iron content), and surrounding trabecular bone [3].
On T1–weighted (T1–W) and T2–weighted (T2-W) fast spin–echo (FSE) sequences, differences in T1 and T2 relaxation times generally allow the differentiation of normal red and yellow marrow from pathologic marrow. The trabecular bone itself has little direct signal but contributes to T2 shortening, producing local magnetic field gradients [7, 21].
Since fatty marrow is composed primarily of low-cellular lipids, its signal characteristics are similar to those of subcutaneous fat on both T1-W and T2-W spin-echo (SE) sequences. Red marrow is more cellular but still contains significant lipid, and therefore, the signal characteristics of fat are averaged with the longer T1 and T2 relaxation times of water and protein [7, 12]. On T1-W images, the signal intensity of red marrow is less than that of fatty marrow but typically higher than that of adjacent muscle or intervertebral disks (except in the very young child, in whom the fat content of hematopoietic marrow can be quite low). The exact marrow signal intensity will depend on the specific water and lipid content [7, 12]. On T2-W images, the signal intensity of red marrow is similar to that of adjacent muscle and approximates the signal intensity of fatty marrow. Hence, the contrast between red and fatty marrow is more evident on T1-W sequences. SE imaging underestimates the proportion of hematopoietic marrow because the short T1 relaxation time of fat overwhelms the longer T1 relaxation time of red marrow.
Fast spin-echo (FSE) T2–W sequences have largely replaced conventional T2-W SE imaging because of the marked reduction in acquisition times as well as improved signal-to-noise ratio for similar acquisition times [3]. Fat is much brighter on T2-W FSE images compared with conventional T2-W images, and selective fat suppression is therefore generally applied to FSE T2-W images to improve other tissue contrast [12]. With fat suppression, T2-W FSE images have been shown to be highly effective in the evaluation of marrow abnormalities, improving lesion conspicuity [22] (Fig. 25.11). As most marrow lesions are rich in free water, they are brighter than both red and yellow marrow on T2-W images and thus easily detected [12].

A variety of disorders may lead to abnormal marrow. These include disorders of marrow hyperplasia and reconversion, disorders with diffuse marrow infiltration (including neoplasia and non-tumoral infiltration), and disorders of marrow depletion and failure. MRI has proven to be a sensitive method for detecting focal, multifocal, and diffuse bone marrow lesions, including those of neoplastic, infectious, and ischemic origin (see Table 25.1). Careful consideration of the morphologic signal characteristics of any marrow lesion, its distribution, and its location facilitates diagnosis.