An ‘air bronchogram’ (arrow) can be seen clearly within the area of shadowing in the right middle zone. This shadowing has a distinct inferior margin (arrowheads) running along the line of the horizontal fissure which is the inferior boundary of the right upper lobe. This is therefore right upper lobe consolidation
11.2 Atelectasis 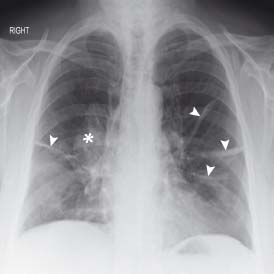 This patient was recovering from a widespread pneumonia when this CXR was taken. There are multiple bands of atelectasis (arrowheads) which are the result of the inflammatory process. There is a persistent area of consolidation in the region of the right hilum (*)
11.3 Bronchiectasis 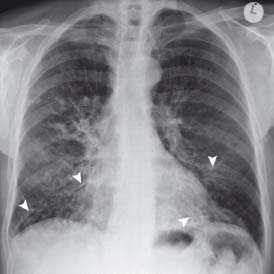 Bronchiectasis is a difficult diagnosis to make with any great certainty on plain CXR imaging. The diagnosis is made accurately on high resolution CT (see Chapter 33). This CXR demonstrates ‘tram tracks’ (arrowheads) which represent thick-walled dilated bronchi
11.4 COPD 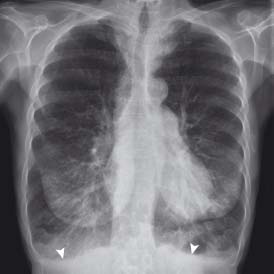 Consolidation is a pathological process caused by filling of the alveolar airspaces with fluid or debris such as:

Consolidation appears as a ‘fluffy’ light grey density that is not well demarcated unless bound by a pleural margin, e.g. a fissure or lung edge. The classic signs are air bronchograms

Tags: Radiology at a Glance
Mar 7, 2016 | Posted by admin in GENERAL RADIOLOGY | Comments Off on CXR classic cases I
Premium Wordpress Themes by UFO Themes
WordPress theme by UFO themes