Selecting the proper filming technique and injection rate is critical in performing high-quality angiographic studies. Many variables must be considered, and each examination, or run must be tailored appropriately. The representative filming sequences and injection parameters provided herein are those typically used at our institutions, and they may need to be modified to suit the individual patient.

Currently, two basic filming techniques are used in angiography: conventional filmscreen imaging and digital subtraction angiography (DSA) imaging. Regardless of the techniques used, it is essential that a fluoroscopic or scout view of the area of interest be obtained at the start of the study, before any invasive manipulation is done. This is especially important in the abdomen, where retained barium from a recent computed tomography (CT) or gastrointestinal (GI) study could preclude obtaining an adequate examination. A scout film taken immediately after placing the patient on the table may also reveal an important element of an unknown clinical history. For example, we saw two patients in whom previously placed inferior vena cava filters were discovered on scout fluoroscopy when the patients were placed on the angiographic table for insertion of an inferior vena cava filter. In both cases, the patients were poor “historians,” and they had incomplete medical charts. Furthermore, it is essential that overlapping vascular segments be separated by additional views when necessary to answer a clinical question and that multiple views be obtained whenever critical information is needed (Figs. 3-1 and 3-2).

Conventional film-screen imaging is often referred to as cut-film imaging. It has been largely replaced by digital acquisition techniques; however, it is of both historical and current interest because it is the basis on which the subsequent technology was derived. Cut-film arteriography uses cut sheets of film stacked or placed in a roll within a delivery magazine or cassette called a rapid film changer. Rapid film changers carry between 20 and 30 14 × 14 inch films. They operate at maximum filming rates of either four or six films per second (Puck, AOT-S; Siemens-Elema-Schonander, Inc., Elk Grove Village, IL, U.S.A.). The number of films per second and the duration of filming during an individual run are programmed into the system before each angiographic run. The most important consideration in determining the appropriate filming sequence is the rate of blood flow in the vessel(s) being studied as well as the particular pathology being investigated, with faster filming rates during the rapidly flowing arterial phase and slower filming during the capillary and venous phases. Filming near the contrast injection site generally mandates faster rates than filming downstream at a distance from the catheter. The goal is to maximize the diagnostic information obtained during each contrast injection without excessive contrast dose or exposure to the patient and without a waste of x-ray film or radiation.

Filming sequences are stated as the number of films exposed per second for a specified duration of seconds. The filming can be divided into segments, if so desired, to follow or parallel the blood flow. For example, a typical programmed run for a routine abdominal aortogram might be three films per second for 4 seconds and then one film per second for 8 seconds. This would expose a total of 20 films over approximately 12 seconds. In our institutions, we would express this particular film sequence as “3 for 4 and 1 for 8.” Certain studies require that the filming continue well into the venous phase. For example, a typical filming sequence for selective superior mesentric arteriography for GI bleeding or superior mesenteric portography might be one film/per second for 10 seconds and then one film every other second until the film changer has exposed the entire magazine of film (“1 for 10, then 1/2 out”). Thus, the entire run would give a total of 20 films lasting for a total of 30 seconds, which is adequate for late venous visualization (Table 3-1). 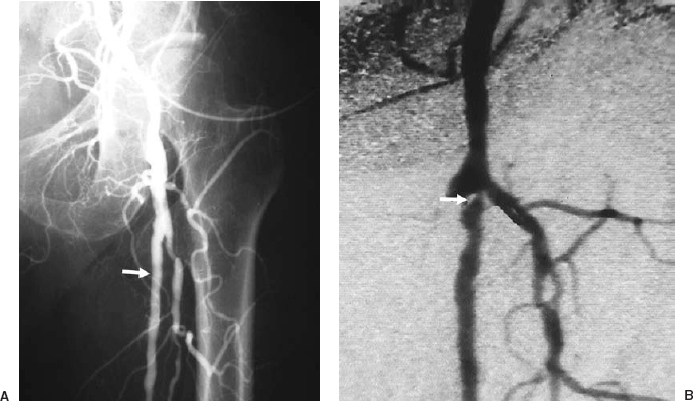 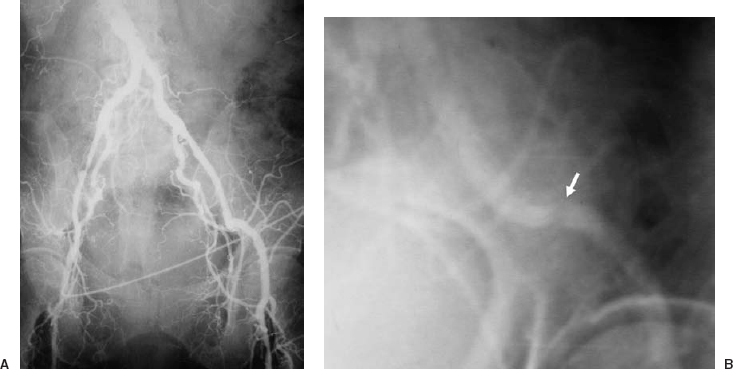 Filming should be tailored to the patient and the anatomy. At one extreme, rapid flow through an arteriovenous fistula mandates a minimal framing rate of three frames per second; four to six frames per second may be needed. On the other hand, for imaging an aneurysm in a patient with low cardiac output, one exposure every second or every other second may suffice.

A scout film obtained prior to any contrast injection is used to verify proposed positioning and exposure technique. Scout films usually are obtained after any significant patient repositioning as well as at the start of any procedure.

The initial exposed film of the run is referred to as the zero-second film. This exposure is obtained just prior to contrast opacification. It provides a necessary baseline for dynamic evaluation of the film run and allows the radiologist to analyze the run for any contrast-related artifacts, for example, baseline calcium projected over an artery. Historically this film provided a “mask” for photographically subtracting out the bony background structures (after “polarizing” the film to reverse black and white) from the images so that only the vessels being studied are visualized. This process is called, for obvious reasons, subtraction imaging. Since the advent of DSA, photographic subtraction imaging is used infrequently, if ever; however, historically it provided the conceptual basis for DSA. Zero-second and scout films also serve as a baseline for dynamic evaluation of the run (e.g., to differentiate extravasated contrast from preexisting calcifications). This zero-second film differs from the scout film in that the zero film is included in the total filming run. In other words, it is the first of the sequence, whereas the scout film is obtained prior to the actual filmed run. 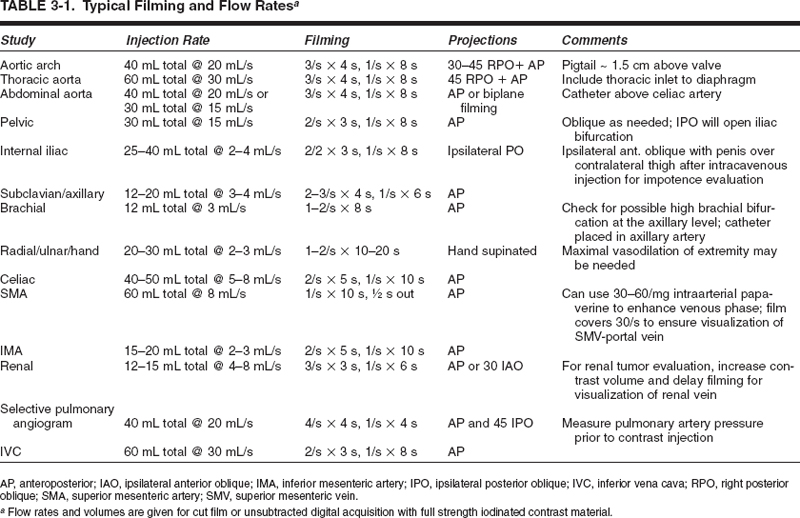 Rather than exposing cut film at regular intervals, fluoroscopically acquired images can be mapped sequentially into computer memory. The acquisition begins with “test shots,” which are equivalent to scouts, obtained to see whether the angiographic unit’s programmed exposure factors are correct. If the test shots are accepted, the actual acquisition series begins. As with conventional angiographic runs, a zero-second acquisition is obtained to act as the mask by slightly delaying the contrast injection during the acquisition. From this image, some or all the background structures can be digitally subtracted. Precontrast background information (the “zero” exposure, or “mask”) can be subtracted out electronically from images obtained during contrast administration. Thus, underlying bone and soft tissue densities are subtracted out of each screen pixel (picture element) as contrast passes through the image. This markedly enhances contrast sensitivity. Nonsubtracted images always should be viewed along with the subtracted ones; in this manner, underlying bone or soft tissue artifacts can be accounted for (Fig. 3-3). Originally, intravenous injections were used to image the arterial circulation (intravenous digital subtraction angiography, or IV-DSA), but this still required a large amount of contrast, was subject to extensive motion artifact, and yielded only marginal spatial resolution; however, the use of intraarterial contrast injections (intraarterial digital subtraction arteriography, or IA-DSA) allowed the use of smaller volumes of iodine while retaining excellent contrast sensitivity; IA-DSA is also subject to less motion artifact. Over the last decade, technical advances have markedly improved spatial resolution as well.1–3