RADIOGRAPHIC ANATOMY OF THE GASTROINTESTINAL TRACT

Radiographic Anatomy of the Gastrointestinal Tract 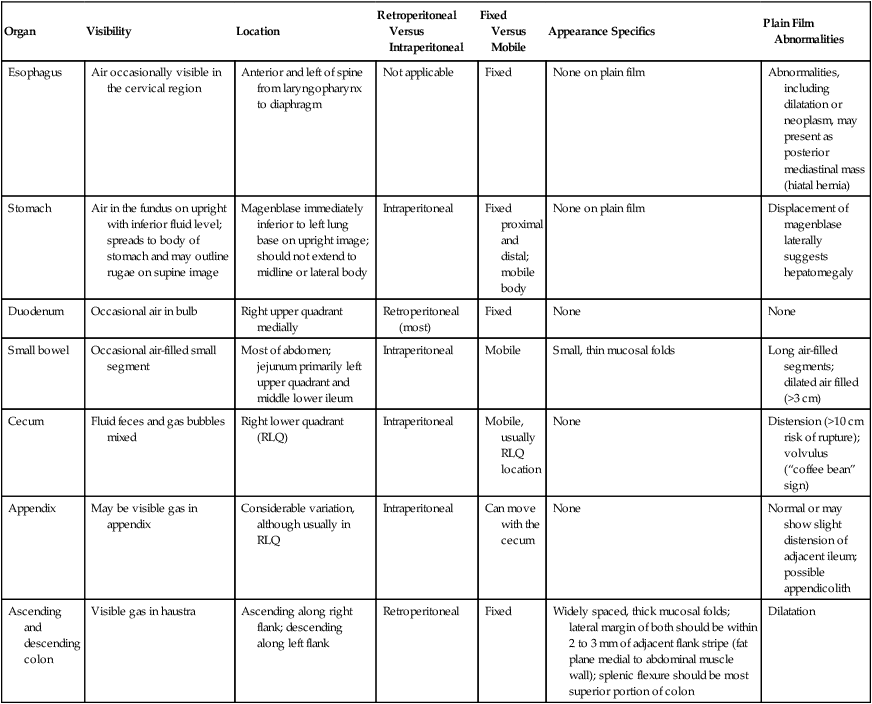 The incidence of gallstones in patients in the United States approaches 20% of men and 35% of women by the age of 75 years;25 thus, gallstones exhibit a greater prevalence in women and in older age groups. Obesity and certain diseases also are associated with the development of gallstones (Table 30-2).

Ultrasonography generally is the preferred imaging modality for evaluating patients for possible gallstones or biliary duct obstruction. Current high-resolution, real-time ultrasonography can identify gallstones as small as 2 mm. This technique is rapid and noninvasive and does not involve ionizing radiation. Gallstones produce hyperechoic foci with acoustic shadowing, and mobility of the stone usually is apparent (Fig. 30-1).5,16 The patient should fast for 4 or more hours because these stones can be missed in a contracted gallbladder.26

These stones may be imaged incidentally on plain film radiographs even in asymptomatic patients, but only 10% to 15% of them contain enough calcium to be visible (Figs. 30-2 through 30-4).12,32 Oral cholecystography (OCG) requires the patient to take an oral contrast agent, which is absorbed from the bowel, excreted by the liver, and concentrated in the gallbladder (except when the gallbladder cystic duct is blocked or sometimes when the gallbladder is inflamed). The gallbladder also is not seen in cases of a lack of absorption or significant liver damage.

Oral cholecystography does demonstrate most gallstones, but since the development of ultrasonography to accomplish this task, it is most useful for providing information about the functional status of the gallbladder (see Fig. 30-3).7 However, the clinical utility of this is still controversial. Table 30-3 lists the imaging techniques and the limitations of each of these key modalities used in visualizing gallstones.

Uncommonly, a noncontrasted gallbladder forms a radiodense “milk of calcium” bile, known as limy bile syndrome, that mimics the gallbladder’s appearance during OCG (Fig. 30-5). This is thought to develop from chronic obstruction of the cystic duct by one or more gallstones in patients with chronic cholecystitis. The duct obstruction leads to decreased gland function, bile stasis, and radiographically visible accumulations of radiodense calcium carbonate in viscous intraluminal bile. Reviewing the patient’s history to exclude any recent intake of contrast material (oral or intravenous) must be accomplished before a diagnosis of limy bile syndrome can be made. On radiographs, the fluid is found in the gravity-dependent portion of the gallbladder. The ultrasound appearance is not consistent because the composition of the milk of calcium bile varies from a semisolid to fluid suspension.

Cholelithiasis usually is discovered incidentally during other studies. In the first 5 years after diagnosis, only approximately 10% of patients experience symptoms resulting from gallstones.32 Right upper quadrant pain is the most commonly reported symptom.32 The pain usually is steady, lasting for several hours. Radiation to the lower abdomen, back, or tip of the right scapula is common; vomiting may occur.5

Complications seen with gallstone disease include cholecystitis, choledocholithiasis, pancreatitis (migration of a stone to the distal common duct where the pancreatic duct enters), cholangitis, stone perforation of the duodenum or colon, and gallstone ileus (Table 30-5).2,3,5,20,32 Symptomatic gallbladder disease may require surgical intervention if nonsurgical techniques such as lithotripsy (using strong ultrasound waves to break up the stone) are ineffective, unsuitable, or unavailable.32

• The prevalence of cholelithiasis increases with age.

• It is more common in women.

• Obesity is a risk factor.

Colon polyps are found in up to 12% of the population.34 The adenomatous polyp is considered the precursor to colorectal cancer.17 Therefore, detection of colonic polyps is extremely important. Polyp size is a critical biomarker guiding clinical management. The incidence of malignancy increases with increased size of the polyp (Table 30-6). Most polyp development is incidental, but polyps may also appear as part of familial polyposis syndrome. Table 30-7 reviews the characteristics of several polyposis conditions.

INCIDENCE OF MALIGNANCY IN RELATION TO POLYP SIZE

Conventional (optical) colonoscopy and barium examination are the most important methods for detecting polyps.33 CT colonography is a newer, minimally invasive method for examination the colon for colorectal polyps; however, it is not widely accepted beyond the current indications of incomplete optical colonoscopy or patients unsafe for optical colonoscopy.

Polyps appear as discrete masses, sessile or pedunculated, which protrude into the lumen of the gut (Figs. 30-8 to 30-10