Ultrasound is widely available and therefore is often the first imaging study used to examine the liver in a patient suspected of have an HCC. On ultrasound, HCC will typically have a thin halo, lateral shadows, and posterior echo enhancement. However, ultrasound is a poor test for characterizing liver lesions in patients with cirrhosis, where regenerating nodules can often be mistaken for tumor. But ultrasonic contrast can greatly improve the diagnostic rate of HCC. After injection of ultrasonic contrast agent, the vascular of the lesion can be showed under ultrasound [14]. Typically hypervascular imaging will present.
Dynamic computed tomography (CT) is a more available and useful test for diagnosis of HCC. In the early phase, the tumor is hyperdense because of its increased vascularity (Fig. 16.1). In later phases, the tumor becomes hypodense as contrast washed out of the lesion. The value of CT scan is as equal as Magnetic resonance imaging (MRI). On MRI, HCC appears to be low in intensity on T1-weighted images, and intermediate in intensity on T2-weighted images. MRI also can be useful in distinguishing HCC from benign lesions such as hemangiomas and regenerating contrast-enhanced CT or MRI is particularly useful to image portal and hepatic veins. In addition, contrast-enhanced images provide critical information about multifocality, respectability, and presence of extrahepatic disease. 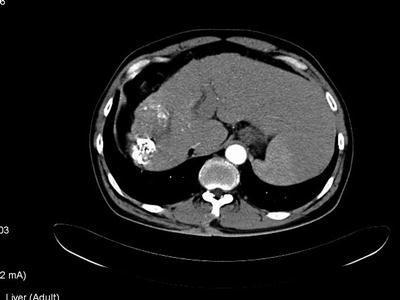 Dynamic computed tomography scan of a hypervascular right lobe hepatocellular cancer with hepatic cirrhosis
The angiographic appearance of HCC can be ever more diagnostic because HCC is characteristically hypervascular. However, because the study is invasive, it is difficult to recommend it routinely for diagnostic purpose. Angiography is often used for therapeutic reasons in embolizing HCC with thrombotic agents with or without chemotherapy, and often detects small tumors not seen on other imaging modalities.
Although fluorodeoxyglucose-positron emission tomography (FDG-PET) imaging has been found to be useful in a variety of tumors, its use in HCC has been disappointing, with significantly lower SUV (standardized uptake value) for HCC compared with that for metastatic tumor or other primary liver tumors [15] and an accuracy of 20–50 % [16, 17]. Thus FDG-PET currently has no proven role in the staging of patients with either primacy or recurrent HCC.

The American Joint Committee on Cancer (AJCC) sixth edition staging classification uses size, presence of vascular invasion, lymph node status, and metastatic disease as prognosticators of outcome (Table 16.2). Several important changes have been incorporated into the new tumor-node-metastasis (TNM) staging system. First, all solitary tumors without vascular invasion regardless of size, are classified as T1 because of similar prognosis. Second, all solitary tumors with vascular invasion, again independent of size, are combined with multiple tumors 5 cm or smaller and classified as T2 because of a similar prognosis. Third, multiple tumors larger than 5 cm and tumors with evidence of major vascular invasion are combined and classed as T3 because of a similarly poor prognosis. Fourth, stage IV refers to metastatic disease only. The subcategories IVA and IVB have been eliminated.

Partial Hepatectomy
Surgical resection represents the only potentially curative therapy for hepatocellular carcinoma. Resectability for any hepatic tumor, including HCC, is dependent on the patient’s ability to withstand a major surgical intervention, absence of extrahepatic disease, and anatomic respectability (Fig. 16.2). The results of surgical resection are influenced greatly by the preoperative liver functional status. Cirrhosis adversely influences surgical outcome in many ways, and often is the only determinant that results in an unresectable status. Because the liver parenchyma is cirrhotics is fibrotic and firm, retraction and isolation of intraparenchymal vessels is hazardous for the surgeon, and makes hemorrhage a particular concern during resection of HCC. Patients with cirrhosis also are likely to have thrombocytopenia form hypersplenism, further exacerbating the potential for hemorrhage. Finally, cirrhosis is associated with decreased regenerative capacity, increasing the risk of liver failure after partial resections. Therefore, hepatic resection for patients with cirrhosis carries a significantly higher operative risk than the risk for noncirrhotic patients. Hepatic function assessment is very important for patients before hepatic resections, especially for patients with hepatic cirrhosis. There are many complex methods of evaluating liver function to assist in patient selection. Assessment by Child-Pugh classification remains the most useful and most widely used in Western series, although the indocyanine green (ICG) retention rate is used commonly in Asia. Child-Pugh C status is considered to be a contraindication for most of surgeons. Liver transplantation is a better selection for these patients if they meet accepted criteria.

The pictures of a partial hepatectomy, the left shows the lesion and the surgeon hold the tool for resection which named PMOD (Peng’s Multiple Operative Dissector); the right shows the surface after resection of the lesion
HCC has a great propensity for vascular extension, and the presence of tumor thrombus within the main PV or vena cava is an ominous sign. Until now, tumor thrombus within the main PV or vena cava is still regarded as a contraindication to resection. Because liver resections accompanied by portal venous tumor thrombectomies are unlikely to yield long-term survival [18].
Total Hepatectomy and Transplantation
Total hepatectomy and liver transplantation is an attractive option for the patient with cirrhosis and cancer, because it may potentially cure both the underlying liver disease and the tumor. Generally well-accepted indications for liver transplant are Child-Pugh B or C patients with single HCC smaller than 5 cm in size, or fewer than three tumors all smaller than 3 cm. With these criteria, the recent series have found a 5-year survival of approximately 70 % with a 15 % chance for recurrence. However, the result of liver transplantation for HCC remains controversial. A recent article evaluated the outcome of patients undergoing liver resection with rumors that fit the criteria for liver transplantation. In this selected group of patients, overall survival at 5 year was 70 %, similar to outcome after liver transplantation [19].
In practice, many obstacles limit the applicability of transplantation to a large number of patients worldwide. The greatest obstacle is the lack of available organs for transplant. Some U.S. centers report long waiting time with the number of patients being excluded from transplant while on the waiting list because of progression of disease nearly equal to that of those that receive transplant. In Asian countries where the need for donor organs is greater, social and cultural obstacles are found for organ donation, and thus livers are in even greater shortage than in the United States. High cost of transplantation is also a major obstacle. Although the survival is similar after hepatectomy or transplantation in noncirrhotic HCC or some of moderate cirrhotic HCC, transplantation represents the only potential curative option for patients with liver dysfunction.
Living donor-related liver transplantation (LDLT) has been reported for HCC. Although LDLT is an available method for patients with HCC waiting for transplantation, concerns have been expressed about the safety and ethical implications of this procedure.
Hepatic Artery Embolization
Because a large majority of patients have live-only disease that is technically unresectable, other forms of therapy are needed for HCC. Because these tumors are so intensely vascular and are fed primarily by the hepatic artery (HA), embolization of the feeding arterial vessels has been shown to be one possible treatment option for these patients. On the other hand, hepatic artery embolization for big lesion of HCC may downstage to be resectable. Clinical practice shows that chemoembolization is a potentially viable option for patients with both unresectable and resectable disease, and additionally, it may have an advantage over conservative treatment.
Cryosurgery
Cryoablation is becoming an increasingly popular method for treating HCC. In this modality, probes that are cooled by liquid nitrogen or argon are introduced in tumors, followed by freezing under ultrasound guidance until adequate volume of tumor plus a 1-cm margin has been treated. Cryosurgery has great theoretical advantage in the treatment of tumors in cirrhotic patients, because very little nonmalignant parenchyma is damaged. Therefore, patients with cirrhosis are still often candidates for the procedure. The technique is useful for treating bilobar tumors, whether with cryosurgery alone or with cryosurgery plus resection. There are some reasons for limiting using of the technique in clinic. The first, this technique should undergo after general anesthesia and laparotomy, because it cannot be performed percutaneously. The second, big size of tumor cannot be treated with cryosurgery, which may increase complications. A number of published series clearly demonstrated the safety of such an ablative approach in experienced hands [20, 21].
Radiofrequency Ablation
Radiofrequency ablation (RFA) is an excellent alternative to cryosurgery and offers the advantage of percutaneous as well as intraoperative application. The disadvantage of RFA is that it is difficult to monitor under real-time US guidance, unlike cryosurgical ablation, because no distinct demarcation can be seen between viable tissue and RF-ablated tissue. One of the additional advantages of RFA is that it is useful in treating those patients with recurrent disease.
Ethanol Injection
Percutaneous ethanol injection is a highly effective treatment for small HCC, with a 3-year survival of 60 % and a 5-year survival of 45 %. In this technique, absolute alcohol is injected into liver tumors percutaneously under CT or US guidance, which results in tissue necrosis. The technique will be applied for small lesion of HCC, although it is not the first choice for treatment of HCC.
Microwave Ablation
Ablation of liver tumors by using microwave coagulation is a relatively new technique that will require further prospective trials before widely application. The advantages of this technique are the higher temperatures it can achieve in a shorter time and the ability to use multiple probes. The 5-year survival may arrive 47 % in some series [22].

Two major challenges exist with respect to chemotherapy administration in HCC. First, the inherent resistance of HCC to chemotherapy, and second, underlying liver function, which may be the major determinant of prognosis in patients with HCC [23, 24
Only gold members can continue reading. Log In or Register to continue